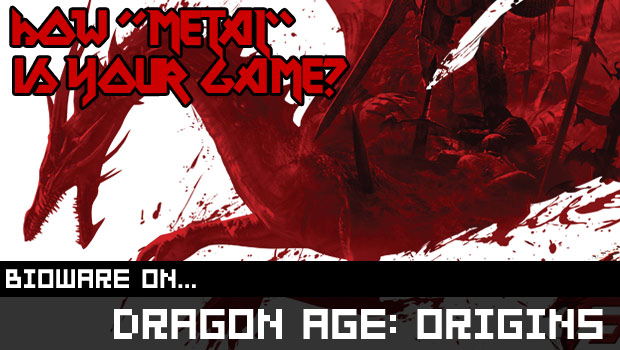 Metal is an abstract thibng. A lot of us use the word to convey that a videogame has an indefinable amount of oomph. The word describes a swagger. An emotion. An action. It describes a lot of things. For the Dragon Age: Origins crew, metal is a feeling.

A feeling that can be hard to describe.

I know this because I asked. Over the last few weeks myself and Nick Chester have been asking developers (and characters) a simple question: how f’ing metal is your game? Plucked from our imaginations as a way to extract an interesting answer, we’ve yet to be disappointed.

For the Origins crew, though, answering the question became a journey.

“The question before me was simple enough,” Origins lead designer Mike Laidlaw told me via e-mail, “ ‘How f’ing metal is your game?’ I considered,” he said, “how I might respond. ‘Very’ just wouldn’t work. Metal isn’t something your quantify, it’s something your feel.”

“So let’s talk about how metal Dragon Age: Origins feels.”

Right. This is the desired effect of this spin on an otherwise softball question. Ask any producer, artist, director, or whatever, if a game they’re doing is a great one and they will say yes, perhaps then spinning the answer into a series of talking points. Gameplay. Moral choices. Open-world environment. Blah. Blah. Blah.

Laidlaw’s first scenario has a touch of a talking point in it, but it mainly avoids the traditional course. It involves an art director, thoughts of armor, and a mosh pit — three surprisingly metal things.

“It’s deafening, even from up here,” Laidlaw tells me. “On the stage, a man in a costume that mostly consists of prosthetic limbs growls threats against the establishment. He promises dark things for the crowd in the mosh pit, where one of the Origins marketing team pinballs with the wild abandon of a man who has, in absolute terms, taken his glasses off. I turn to Dragon Age`s art director. ‘There’s this guy who wants to know how f’ing metal Dragon Age is?’ It’s uncertain how many of the words actually get through.”

“ ‘Seven different kinds!’ He bellows it back like a thunderclap, and the crowd around us leans back in terror, assuming only a declaration of war could emerge from his heavily muscled form. I consider correcting him. I want to dig further than the “metals” of our vast collection of arms and armor which come in everything from iron to red steel, but I am distracted by a payload of disgusting cream-like substance showering down on the mosh pit. Our marketing guy emerges from the torrent like he’s starring in Apocalypse Now. He would later report that it was both “cool” and “refreshing.” No one believes him.”

The second scenario given to me also involves music, which is interesting. Music has become an important marketing tool for Origins. Once billed as nothing more than a Baldur’s Gate clone, Origins took on a new life and established a new identity, with the debut of a raucous trailer full of gore, sex and the wails of Marilyn Manson.

In this scenario, we hear about the metal wail of Thorazine’s vocalist.

“Dragon Age’s lead character artist turns to me as I approach. His is the air of man utterly convinced that each race not only deserves, but needs its own facial tattoos, and that those tattoos will be colorable. He is a man of conviction. He was, after all, the lead singer of Thorazine, Section VIII and Exit Strategy, and thus one of the most f’ing metal people that I know. I deploy the question and he looks away, eyes distant.

“His reply is a torrent of sound. When my brain catches up to the growling assault, I realize they are lyrics of betrayal, of power, of lust and violence, the words dancing deftly between the major themes of the game. In the short burst, ancient curses twist the forms of men, races are enslaved, demons awake and lead teeming armies of foulness to destroy all that is pure. In that moment he is an avatar of primal Metal. He is incandescent. I am seared,” he tells me, finishing the scenario.

As Laidlaw describes, the artist’s reply was a torrent of sound. The image reminds me of “This is the new shit,” the song used in the marketing campaign for Origins. Throaty and powerful, it is a compliment to the on-screen brutality. In a sense, it is everything that is metal. But also nothing. Funny how metal works.

But there are other things that are equally as metal, as proven by Laidlaw’s third and touching scenario.

“PAX. She didn’t have to wait in line that long to play Dragon Age. From the seat of her wheelchair, she was delivering death with a ruthless efficiency. There was a quest before her, after all. She was going to become a Grey Warden, whatever it took. An arrow sinks into the throat of a darkspawn. She maneuvers her rogue behind another, where a flurry of blows cut the beast down. She does it. Her character reaches the Joining, a ritual in which the Grey Wardens willingly sacrifice all to safeguard the world.

“Then she goes through it in the booth, just as her character had done moments before. She emerges from the Joining, determined to see this thing through. Her reward was a chance to wear the colors and wield the sword of a Grey Warden before the crowd. She rises from her chair, set on doing it right. Then she wavers just a little. Everyone holds their breath, but she finds her center and the blade rises proud and true. And there, before fans that have waited for hours to play the game, for one shining moment, she is a Grey Warden. Her name is called, “Hail the Warden!” is the reply. Cheers resound. I have my answer.”

“THAT is pretty F’ing metal,” Laidlaw tells me.