And a nice pair of shoes, too

I remember sitting next to my roommate, Silky, at an important meeting. We were probably hungover, maybe a bit high, or that elusive mix of both that’s only achievable when you’re not yet twenty-five. Our minds were foggy, to say the least, but we tried to pay some semblance of attention.

The reason I remember this meeting so well is simple. At one point, the person in charge started talking about “capital ‘p’ professionalism.” It’s a dumb term, like “synergy,” that corporate team leaders like to throw out there. The speaker, jazzed up at the idea of us young Professionals doing something important, asked what the most impactful way to make a good impression was. The room was silent until Silky cleared his throat and ventured an answer.

It’s silly, right? Who wouldn’t want to dress like they smelled good? Silky’s advice rings out like an old truism, but I still hear his brassy voice whenever I have to get changed for an event that requires me to wear something a bit more impressive than a ratty sweatshirt and jeans that — if I’m honest — haven’t been washed in a month or two.

That mantra echoed around my skull recently, as I played through Resident Evil 7. It’s a fantastic horror game; one that marries a few different genre staples to make a compelling, cohesive experience. It’s scary and funny all at once, but that has nothing to do with why the saying haunts me while I play it. Silky’s words are relevant because of Ethan Winters, the game’s protagonist, and his impeccably rolled sleeves. 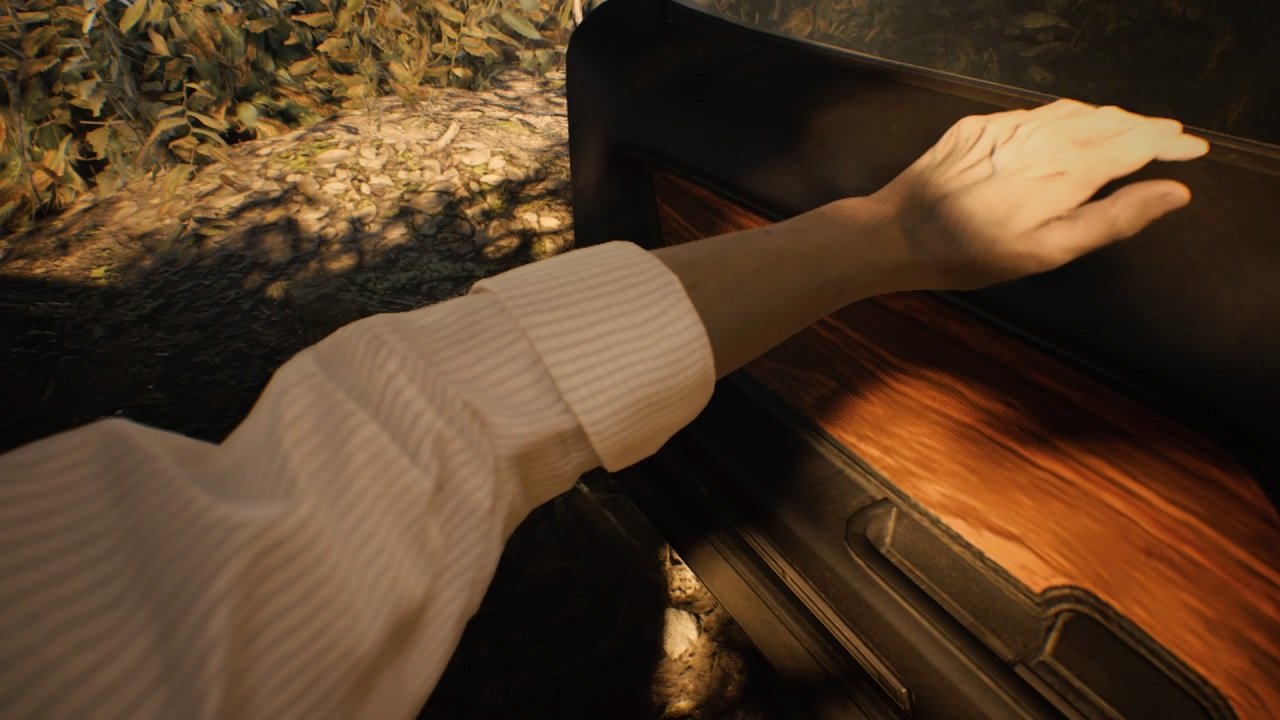 Now it might sound outrageous to pay so much attention to the way a fictional character wears a dress shirt. I’m not one for fashion myself, but I do appreciate a good sleeve roll. For that reason that I can’t help but bask in awe at Ethan, who, despite falling off ladders, rummaging through maggot-infested boxes, and wading through muck, manages to walk away from Resident Evil 7‘s finale without ever stopping to re-roll his sleeves.

What I’m trying to say is that Ethan Winters most certainly smells like shit, but his ice-cool demeanor and starchy sleeves make it seem like he sweats rosebuds.

I’ve been obsessing over Ethan’s outfit since I spotted the impossible sleeves during my first time through the game. It’s simple, really, a nondescript — but magical — shirt, some regular-ass pants, and a pair of sensible brown leather shoes. Ethan’s clothes and flat affectation paint him more like an aging hipster turned advertising executive than the protagonist of a horror game set in a murky bayou. Compared to Leon Kennedy’s action hero-like duds in Resident Evil 4, or the tactical gear donned by early RE characters, Ethan Winters sticks out like a sore, albeit sharply dressed, thumb.

But I think that’s the point. For most of its twenty-plus year history, Resident Evil placed players in the competent hands of both police officers and military operatives. They’re prepared for when the shit hits the fan. The dead might be shuffling about, and ammunition may be scarce, but the Redfields and Valentines of the in-game universe make due and overcome. Mr. Winters, based off of his wardrobe alone, is the polar opposite of what defines the typical Resident Evil hero.

And that’s a big part of what makes Resident Evil 7 work. It’s a game that upsets tradition to restore some glory to its name. The shift to a first-person perspective, emphasis on navigating intimate and decrepit locations, and logic-defying sleeves speak to a design that’s all about returning home with a brand new look. 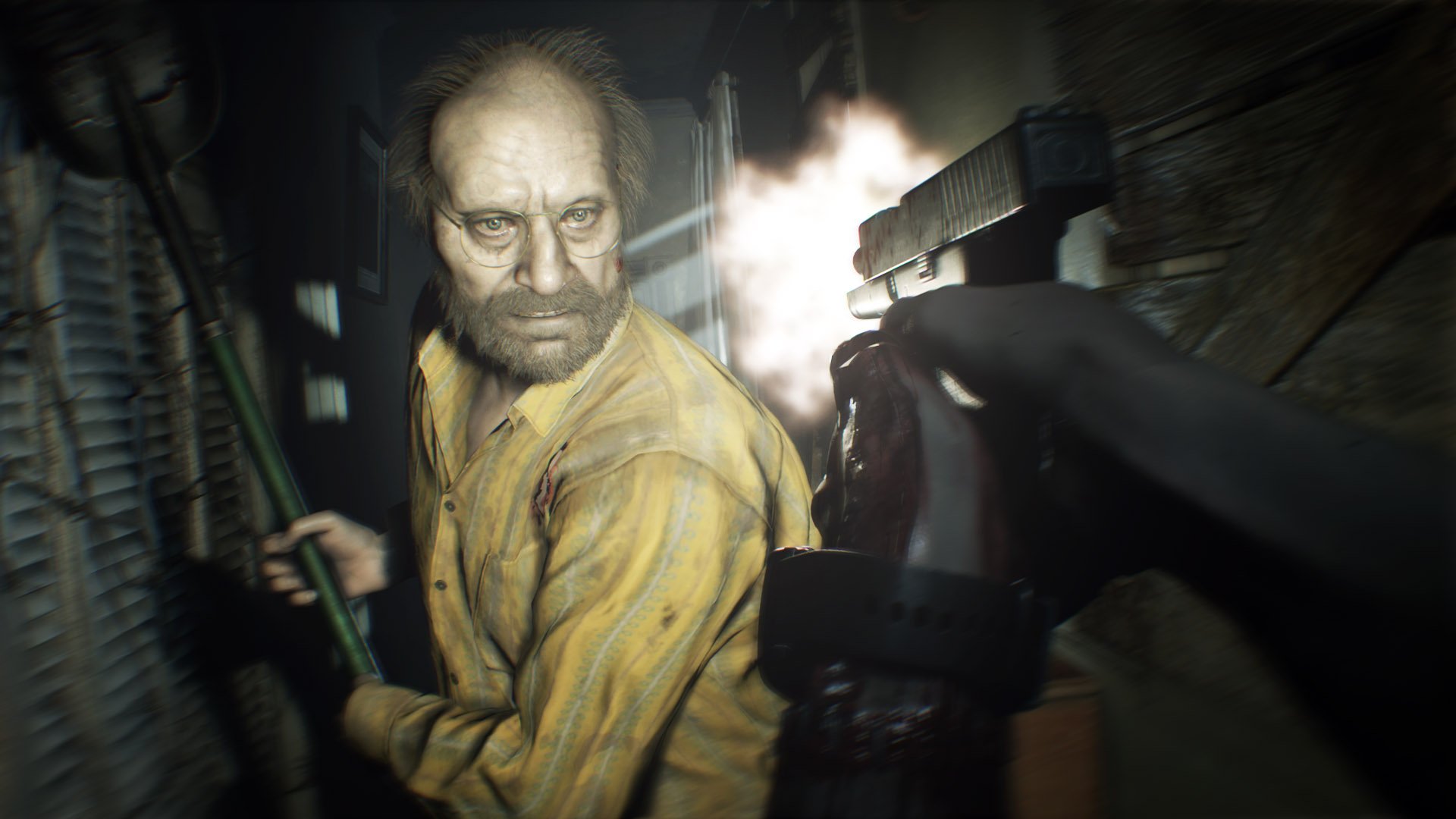 Of course, the concept of ‘home’ is central to the entirety of Resident Evil 7. At the game’s heart is the Baker clan. They’re a murderous bunch, stitched together from pieces of every backwater hillbilly stereotype there is. But they’re still a family and a close-knit one at that. The game sets the Bakers up as a twisted and depraved lot; it’s not difficult to picture them sitting around on a Sunday, chomping on raw flesh while bickering about chores. They’re seen as monsters, at least initially, because they’re grimy and grotesque. Their backwater manor is in disrepair and dotted with the corpses of a few poor souls who found their way into the Bakers’ care. Jack, Marguerite, and Lucas come across as the personification of Southern country evil. Every detail matters and Resident Evil 7 hammers this concept home through the stark contrast of Ethan’s getup and the chaotic existence of the Bakers.

As Ethan combs through the Baker’s bayou estate, he is at odds with everything he encounters. Each corridor he crosses is filthy, dried blood and dirt stain faded wallpaper, and discarded junk sits piled in every corner. It’s a disgusting, oppressive house and Ethan’s dry-clean only clothes have no place being there. Ethan is an outsider, an urbanite stranded in the middle of nowhere, forced to fight for his life against a family of disheveled killers. If dressing like you smell good is the key to success, then hiding from bloodthirsty bumpkins and fighting reanimated atrocities called Molded is surely a wrinkle in Ethan’s plan.

The clash between the decay and death that surrounds Ethan and his ever-resilient sleeves delineates what a modern hero can look like. From a design perspective, it’s a snazzy and practical, yet constant, reminder to players that no matter what happens, Ethan’s in the driver’s seat. After all, he’s the clean-cut Average Guy who’s just trying to track down his missing wife. The crusty old man, with soiled clothes and an imposing axe is crazy and evil, we’re told, just by observing the difference in how he and Ethan dress. It’s a subtle touch in a game that’s preoccupied with detail, and Resident Evil 7 is better for it.

By featuring a protagonist who dresses like he’s won his fair share of arguments at the company water cooler, Resident Evil 7 subverts player expectations. No one expects a character like Ethan to pick up his severed hand and shoot his mutant wife in the head without batting an eye, but he does just that. Being stapled back together and stabbed, hunted and surrounded by living filth is enough to make anyone want to quit. Except, maybe, a Resident Evil hero. Ethan’s certainly one of those; he just prefers a tailored suit to a tac-vest.