Bro-sie the Riveter versus Ruby Underboob

Hawken publisher Meteor has, in its office, a piece of art featuring a woman with a bountiful underboob and very little in the way of clothing, hung in place by CEO Mark Long. The half-naked woman, named “Ruby Underboob” by employees, left a bit of a sour taste in one female employee’s mouth.

“How, you ask, can I stay mad at a sweet young belle who has so obviously taken a break from her important welding to offer me apiping hot cup of coffee and/or a vigorous hand job?” wrote the employee on The Hawkeye Initiative. “If you don’t already know the answer, you might want to check out things like #1ReasonWhy, and the Bechdel Test, and also this, and this, and this and this, and all these other things. (And while we’re talking you should check out this other bullshit right here.)”

Rather than simply vent anonymously on a blog, however, the worker decided to do something proactive, and illustrate a point with a pointed illustration.

“I approached Sam Kirk, a wickedly funny co-worker who shared my sentiment. Sam, turns out, is a very talented artist who can be bribed-slash-inspired using a medley of feminist indignation, hysterical giggling, and two $90 bottles of añejo tequila.” 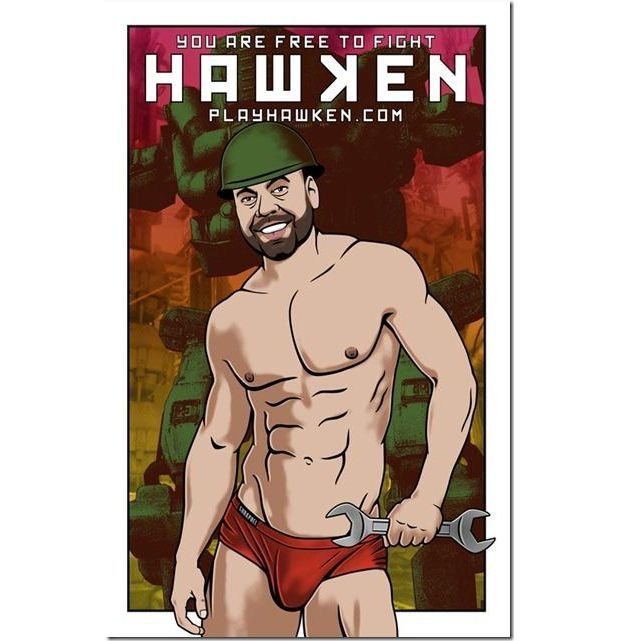 Bro-sie the Riveter was created as a male counterpart to Ms. Underboob, and was hung in her place … with emphasis on the hung.

Things went well on the morning of the switch. Anonymous was giddy with delight, co-workers discovered the prank (unleashed on April 1) and laughed. Everything was fine until Mark Long himself arrived, and saw his beloved boobs replaced with a magnificent man-package.

“We hear a loud: ‘What the hell is this?!’ And then all goes quiet. Ten minutes pass. We panic.

“We are both suddenly and painfully aware that we have, in fact, just punked the CEO of our company. He is by all accounts an awesome dude. He is also a late-50s ex-army guy who happens to determine our employment futures in an at-will state. Meep.”

Fortunately, Long is as awesome as the employee hints, as he not only saw the funny side, he reflected on how his choice of decor may affect others.

“That was a brilliant prank,” Long told his employee, “You called me on exactly the bullshit I need to be called on. I put up pictures of half-naked girls around the office all the time and I never think about it. I’m taking you and Sam to lunch. And after that, we’re going to hang both prints, side by side.”

It can be argued that Long kind of missed the point, since the original poster is still up. It’s at least a compromise though, which is one step in a half-decent direction. You don’t get too many of them these days, and it’s always pleasant to see. It’s also a nice lesson in how many people might come across as assholes but are just, well, kind of ignorant of a problem and, once they’re aware, they can take steps to fix their part in it.

Not always though. Some of them really are just total assholes. You need to call them out on their shit to separate them, though, and this was certainly an amusing example of that being done.