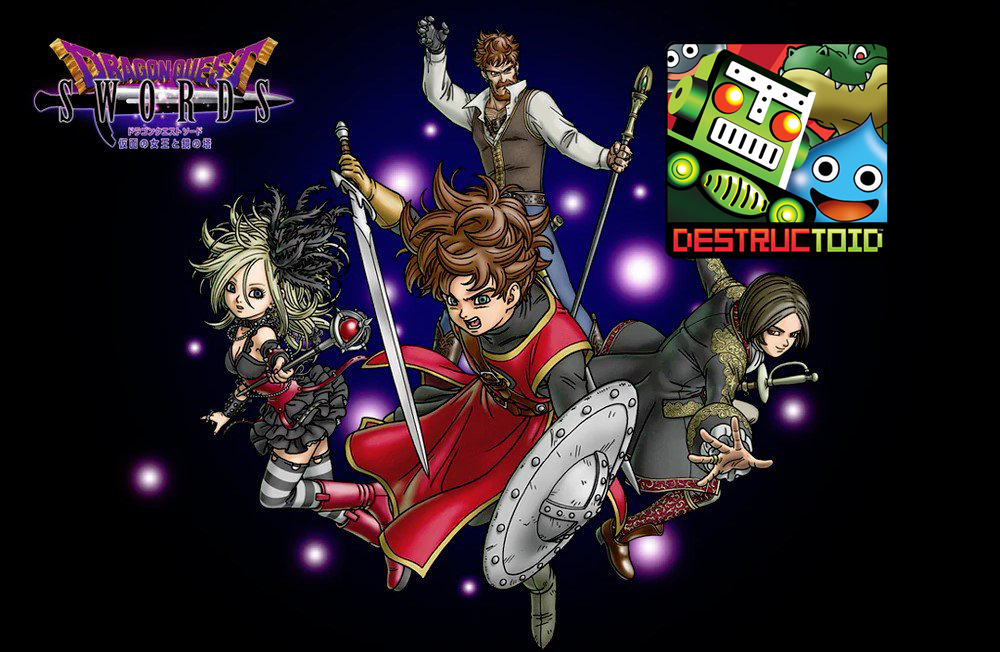 Taking a stab at it

Dragon Quest has been one of my favorite RPG series for about a decade. Simple, idealistic fairy tales resonated with me in my childhood the same way colorful, idealistic shonen anime worlds did in my college years, so it’s little wonder these tradition-driven games pulled me in so strongly. But I was a pretty picky and stubborn kid growing up. I’d refuse to eat my greens, I thought all furries were gross weirdos, and I’d mostly buy games based on things I was already familiar with. I may still refuse to eat my greens today.

I never touched Final Fantasy until Kingdom Hearts’s crossovers with Disney bridged the gap for me. My exposure to traditional JRPGs in general was limited. While Dragon Quest’s popularity afforded it many commendable crossovers, we wouldn’t get Fortune Street in the west for a very long time. Instead, I found a game that appealed to one of my other obsessions at the time: motion controls.

As cool as they seemed when I was a kid, I now know most early motion control-based games have a well-earned stigma for unreliability. Practically any game using the Wii’s motion sensor for anything beyond pointing has been called a wagglefest under the pretense that is what those controls amount to — waggling at random until your objective is met. Converting a turn-based RPG into a motion-controlled action RPG sounds extremely counterintuitive to JRPG fans. And yet, the wagglefest called Dragon Quest Swords: The Masked Queen and the Tower of Mirrors is credited with introducing me to one of my favorite JRPG series, and it’s a game I still look back on with respect. Naturally, I wouldn’t say I respect a motion control game if I didn’t respect its controls… mostly. Dragon Quest Swords is played from a first-person perspective with real-time battles fought by swinging the Wii Remote to attack. The Wiimote would accurately detect which direction a swing was going from, only getting finicky with 22.5° differences in diagonal swings or with thrusts. It couldn’t detect the exact position, so every slash went through a focal point the center of the screen, and the Wiimote pointer could set a new focal point at will with the press of a button. While pointing felt a bit shaky in my limited playing space, it was fast and reliable enough for me to adapt to new enemy formations on the fly, and it allowed for much more variance in attack patterns than otherwise.

But a knight is nothing without his trusty shield. The pointer also acted as that shield with the press of the B Button. Parts of the shield would wear down and break off over time, but the sweet spot in its center would always remain sturdy. This meant that there was a grace period to learn new enemy attack patterns, but that grace would diminish over time if the player didn’t pay attention to them.

All enemy attacks were telegraphed with target points, some more clearly or quickly than others. Some could even be parried with a well-timed slash (and thankfully, there’s an obvious marker for parryable projectiles). Since attacking and defending both required keeping the pointer at the ready, rapidly switching between offense and defense always felt fair. The result was the foundation of a patient combat system where the player has some control over the flow of battle, but which rewards observance and exploiting enemy openings more than blindly flailing the Wiimote.

Additional tweaks here and there made the whole package feel closer to its RPG roots. The protagonist leveled up and equipped new gear as he fought. Little nooks and crannies hid items to help his quest. The hero even had party members, though only one ally could join at a time and they could only help by casting spells. Their MP was very limited, but it was a good way to keep the focus on swordplay while still mimicking some sort of party dynamic and giving options to cheese any frustrating encounters.

I blindly flailed the Wiimote (again, stubborn kid), and many enemies would consistently block or dodge my attacks unless I waited for them to attack first. I had to learn to think about my attacks, something that never occurred to me while playing Wii Sports. Waggling aimlessly didn’t immediately punish me in most cases, but it blatantly held me back from what I was trying to accomplish. This design gave me the opportunity to learn from my mistakes — without invoking too much frustration — while improving my skills using the unorthodox control style. Even though this made the chinks in the motion controls more obvious, it also made the process of trying to play properly more rewarding.

Dragon Quest Swords did all of that without the Wii Motion Plus. It played like an arcadey predecessor to Skyward Sword before even Nintendo was ready to do so. Its limitations are glaring and cause problems, but it found ways to partially circumvent them and become a fun casual action RPG with the potential to keep hardcore players busy via a challenging postgame and high scores to pursue. Still, though “I had fun” explains why this game stuck so closely with me, that doesn’t explain what it did to hook me on other Dragon Quest games. I knew I wasn’t going to get any Wiimote sword action in the traditional turn-based RPGs.

What I did know is that I would get to experience similar tales. And, as I’d be happy to learn in the future, Dragon Quest Swords was every bit as shamelessly quirky as the rest of the series.

Every character was named after some sort of blade, from the hero’s father Claymore to Swordmaster Dao. Slimes, drackies, and other monsters attacked with wide goofy grins on their colorful faces. Claymore lost his sword arm fighting to seal the big bad years ago and he just decided “Nah it’s cool brah, I’ll just learn to use magic instead”. Magic which he used to wake up his son on his birthday by shouting KABOOM, followed by literally exploding him (it was slapstick, hero’s fine). Fleurette, the last party member to join, would give the nameless protagonist a sword-themed nickname of the player’s choice that her voice lines frequently called out. You could replace your shield with an orichalcum spoon. A spoon of orichalcum.

With all of its quirks on every corner, Dragon Quest Swords felt a lot different than what I expected it to be like from the cover. It doesn’t feel like it revolves around a central theme, not even a typical one like the power of friendship, and it has no need to pretend that it does. It’s more about having an enjoyable journey that makes you feel like a hero, a journey that begins simply because it’s the hero’s responsibility anyway. It feels aesthetically different from what I see in the stereotypical JRPG despite the fact that this is the stereotypical JRPG. And I can say the same about most of the rest of the series.

I already wrote at length about why Dragon Quest’s overarching tone means so much to me, but to summarize, there just aren’t many “feel good” games in the RPG genre. It’s refreshing to have something brimming with charm and optimism even when you have to save the world from a demon lord. I love a deep, dramatic, and emotional story, but I’m just as happy with an enjoyable romp alongside comrades-in-arms. I’m a simple man like that. Dragon Quest Swords let me know that those were the kinds of adventures I’d be in for when I dove into its main series. 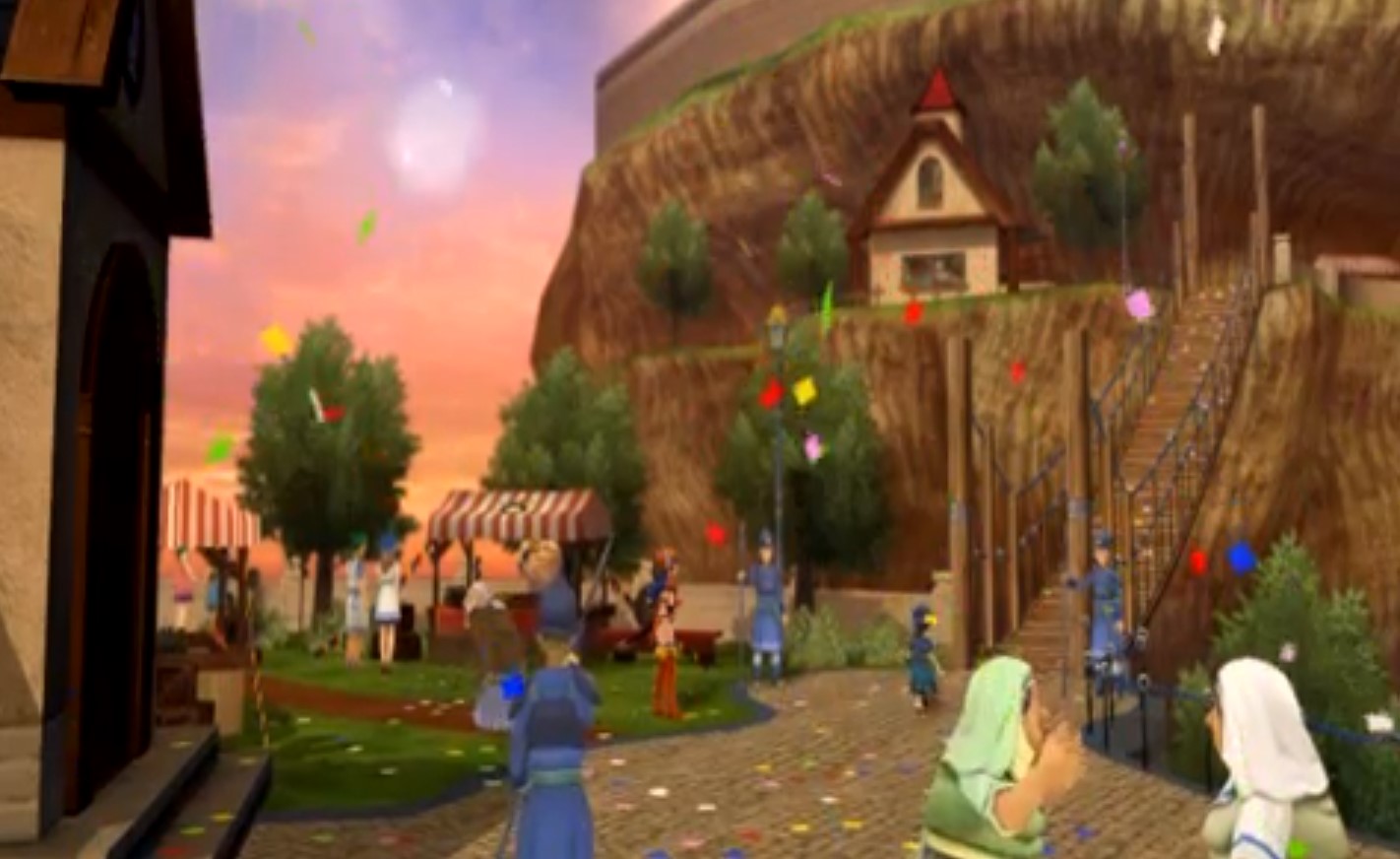 At an age where I was still learning to break out of my shell and broaden my gaming horizons, Dragon Quest would eventually help me get out of my comfort zone by first getting out of its own. But it remained true to what makes the series iconic, despite the unfamiliar framework around it. I find that commendable of Dragon Quest spin-offs in general, really. They usually do something drastically out of the series’s norm with their gameplay, but they remain consistent in tone and in its ideals. Some will be more goofy or serious than others, as is typical of anything that doesn’t want to get stale, but I can believe that they all draw from the same anthology of whimsical anime fairy tales.

It’s hard to say for sure whether these controls were as good or bad as I thought they were when I was a kid. I only rented Swords (multiple times) about a decade ago, so my memories beyond broad or outlandish details are fuzzy at best. Many reviews both old and new aren’t so fond of it, so it’s possible I’m in the minority for loving this game so much. That also doesn’t matter much to me. I enjoyed it back then, and it was my gateway into a series I love even more. That alone makes me happy I spent so much time on it.

It still took me a while to get into the actual core games, but the whole process might not have ever happened if I never played Swords by chance. Or it would have at least happened a lot later. Either way, Swords shaped my tastes today by giving me a chance to validate my continued fascination with worlds of its ilk.

As little sense as it makes for a JRPG to pursue a motion control action route, I can imagine why it might seem appropriate for Dragon Quest. Even though this series balances between E10+ and T ratings, its tone invokes a childlike playfulness that appeals to kids at heart. When motion controls were still young, a quest where you swing your own sword invoked a very similar playfulness. It definitely did so for me.