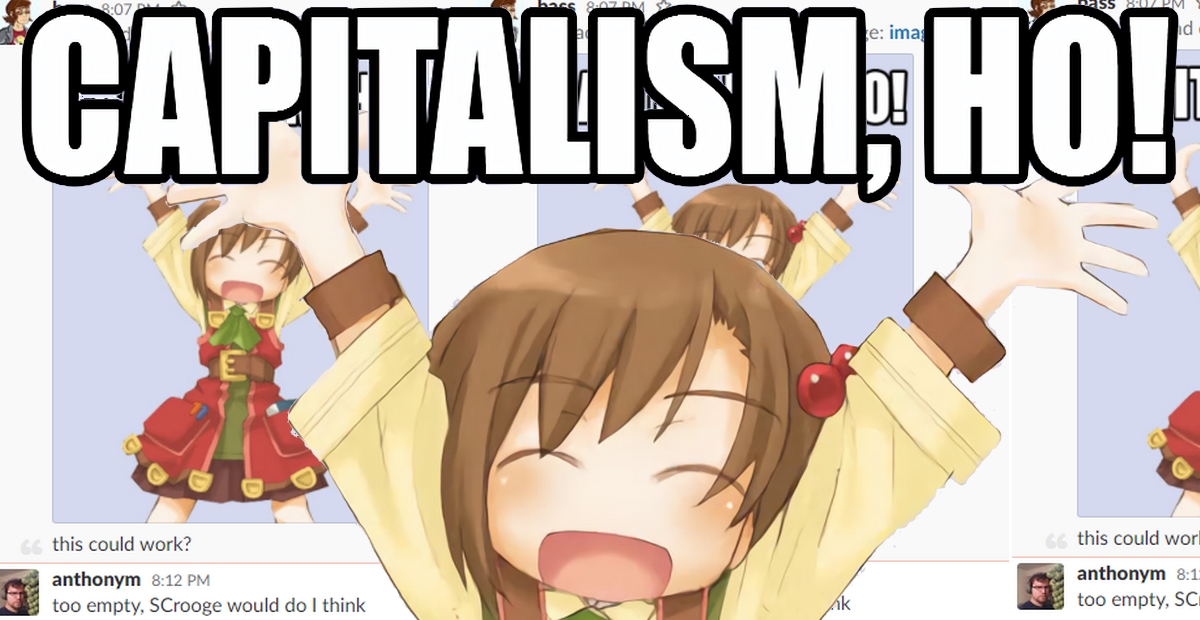 She brings home her pay for love, for love

Since you’re reading a gaming website, odds are good that at some point in your life you bought a video game. And, if that’s the case, chances are that you’ve also complained about the price of the hobby from time to time. AAA games seem expensive, so it’s tempting to wait for a big sale or get independent games at a cheaper price instead. When the price of video games in Canada rose to $80 instead of $60 due to the falling value of our dollar compared to the almighty USD, you could hear the groans of gamers in every street. Yours truly included, of course.

But I wonder. Is it really that expensive of a hobby? A rule of thumb I often see online is people waiting until games are under a dollar per expected hour of entertainment. Wouldn’t it be amazing if other hobbies were priced like this? A movie ticket would cost two dollars, a Magic the Gathering draft would cost four dollars or so… And yet on the other side of the spectrum, would I be willing to pay $400 straight up for Binding of Isaac? Not really… which is probably why repeating payments like MMO fees or microtransactions are all the rage.

Something that caught my attention when thinking about video game pricing is just how huge the market for microtransactions already is. On PC, in 2016, it was estimated that total gaming revenue was around $36 billion USD. And yet, out of those, only $5.4 billion comes from “premium games.” By itself, League of Legends got $1.7 billion in revenue! Absolutely crazy.

I hate microtransaction models. I find these pop-up windows constantly asking me to spend disrespectful, and the games never feel complete because of the constant stream of new incentives to pay. In the case of gacha and loot boxes, there’s the whole never-ending lottery aspect of it.

The issue I have with that is fairly simple. As long as a game doesn’t have microtransactions, there’s an upper boundary, a maximum amount you can spend that makes the game stop asking you to fork over more money and just lets you enjoy it as much as you want. But if you fall victim to your inner demons and spend over one thousand dollars in something like Summoners War, Fifa 17, or Fire Emblem Heroes, the game will still ask you for more money. So many exciting new things you could win with just a few more spins! Profitable they may be, but these practices rub me the wrong way. I think there’s still value in the satisfaction of being done with something, of conquering everything a game has to offer, DLC or not. The traditional way of doing things has a lot more appeal, and I wish publishers weren’t punished as much for staying away from the microtransaction golden goose.

And yet, I don’t think a lot of people would be willing to accept an increase in standard game pricing. It can be difficult to justify spending more on a hobby, especially when money is tight… And nowadays, people have very generous digital sales and free to play games to compare new releases with. I just wonder if there’s a more consumer-friendly way to do business than these lotteries for kids, while still be able to bring in the dough in a sustainable way as each dollar earned is worth less and less due to inflation.

I just hope there’s a solution to this solution. Maybe more expensive games that allow you to play early content for free? Or more strict regulations on video game microtransactions?

In any case, I figured I’d ask other people in the community how they feel about video game pricing too. Maybe we’ll strike accidental genius within our armchair expert ramblings?

LaTerry is down with the AA:

“The $60 price tag is already almost too much for me, if they raise it higher I’m going to end up buying less AAA games than I already do. I feel like there are a lot more people playing games today than ever before, so even if individual sales make less money than they used to, there are more people buying them, so long as the game they make is good. I think to make things sustainable they need to stop spending so much money on making the games.

Hellblade was made by a small team, had a modest budget, and sold for a lower price. The game looks amazing. Why do giant companies spend so much trying to make games look incredible when this smaller team does better than a lot of them for a lower price?”

“Split multiplayer and single-player components up, sell them individually. A lot of people don’t want one or the other, more people will buy in [as a whole], and it justifies jacking up the price of ‘both’ versions, which many will buy anyway.”

“I think all the unnecessary padding out of ‘content’ hurts in the long run. If players are jumping through hoops to collect crap and dick around for 150 hours, they aren’t playing (buying) a new game, or are buying less of them.”

“I’d introduce the CelicaPoints value system. Basically, you buy a membership and you earn CelicaPoints whenever you purchase a game. You can then put CelicaPoints towards a future purchase. The base membership is $5 per month but you can become PlatinumCrazed for $15 a month and earn 1.5x the CelicaPoints per purchase! CelicaPoints can only be obtained on select games, cannot be exchanged for a cash value and are non-transferable.

I would also like to announce my new venture for 2018: Celica Pops*! Collect all 538 sets and counting….soon!

Vadicta doesn’t think inflation is a big deal with entertainment:

“Seriously, inflation/cost of living isn’t this be-all, end-all thing in media. The prices of DVDs, CDs, books and all either haven’t changed or have actually gone down between now and twenty years ago.

These are entertainment items, luxuries. If the economy is worsening or times are getting harder, that’ll hit everyone, and raising the prices of your media is a surefire way to make sure people who have less and less disposable income don’t buy your game.

Instead, a studio could split that workforce into say five or even ten teams, making less ambitious-maybe (though this doesn’t have to be true, based on what some independent game projects have shown is possible) games that cost less and can serve a more diverse audience that individually doesn’t need to be as massive as the other market, so these games can turn profits more easily.

Games making money has never been a question of DLC or micro-transactions or loot boxes; it’s always been a question of excessive spending on over-saturated markets creating bubbles that slowly deflate as audiences move on. Then the next surprise hit rises, and the cycle repeats itself. We’re on the cusp of that with PlayerUnknown’s Battlegrounds (a game that didn’t cost a major studio tens of millions of dollars to make) hitting so hard and enticing other studios to try to grasp onto that success.”

ZombZ has a game plan that sounds straight out of a political platform. Maybe video game pricing should be a hot topic in the next elections?:

“Adjust initial prices to inflation, keep development costs low. Make a good game and cut down marketing. Don’t insist on growing your company just because that’s what shareholders want. Keep it simple and sustainable. You don’t need six studios for spinoffs or annual releases nobody wants.“

Greenhornet214 knows what he’s wishing for after collecting the Dragon Balls:

“I would have game developers and publishers line up at my door to pay me to play their games (which they give me for free). But I only play the ones I feel like.”

Lawman is willing to pay more up front if it’s properly justified:

“I’d just do it the way they used to do it: make a straightforward game with a single attached price. I’m not even against DLC, so long as it’s done as an afterthought that comes after a complete product is finished. Too many developers/publishers put the cart before the horse, and it only winds up feeling like they want to charge you $90 to $100 for a full product. And sometimes, a game simply doesn’t require DLC at all.

I’d say, at this point, if it comes down to constantly pulling the shenanigans a lot of companies do or just jacking up the price to, like, $70 or $80, then just bite the bullet, raise the price, and explain precisely why you’re doing it. Some are going to be sore no matter what you do, but as long as you’re upfront about it I think a lot of people can handle it. Sadly, I expect the companies that need the enhanced costs the most (AAA publishers) would be the least likely to explain themselves, so it’d be a colossal failure.”

Anthony Marzano (not to be confused with the best teeth in the game) forgot to turn his automatic comment section generator off:

“PC or Switch port when?”

What about you? How do you feel about video game pricing?