[Dtoid community blogger RedHeadPeak shares his concerns for the sanctity of our ancient history in the wake of the recent Uncharted 4 announcement. (I bet he doesn’t much care for Indiana Jones, either.) Want to see your own blog appear on our front page? Go write something! –Mr Andy Dixon]

There’s going to be another Uncharted game?! Quick, hide all the precious historic artifacts! Raise airport security! Alert the United Nations to the threat! Make sure… What? No, I don’t think I’m overreacting.

The recent announcement of Uncharted 4: A Thief’s End has by now generated a ton of excitement. I’m sure that it will make for a fine addition to the franchise. However, our collective excitement for another installment should be put on hold. We need to talk about Nathan Drake’s bad habits, and whether or not we can afford to let him run around on another adventure. 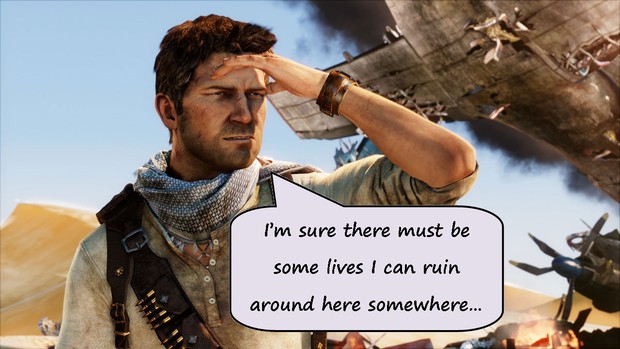 I’m not the first to raise a discussion around the questionable actions of the Uncharted protagonist. There are many gamers that share these concerns; Drake’s past is strewn with corpses and chaos. In the teaser for the fourth instalment, Drake gave the impression that he might be slowing down (the game title has a sense of finality to it) but hundreds more people and artifacts will be inevitably destroyed, even if this is the last game.

I would like to take this discussion further. Let’s face facts — not only is Nathan a blundering, murdering psychopath, he is quite categorically incapable of doing anything good. He’s not especially evil — there are honest intentions in him somewhere — but he is a complete calamity and far from being any kind of hero. Any good he manages to do is overwhelmed by all the bad he does. If Nathan Drake is allowed another adventure, we can expect an even greater level of devastation.

Mr. Drake is a man doomed to repeat a cycle. In each game, he learns of a piece of history lost in time and seeks it out. The treasure inevitably turns out to have been lost deliberately or hidden for good reason, and for that reason the ‘bad guys’ are also seeking the relic. Each time, Nathan deems himself the only person fit to prevent these bad guys from unlocking the evil potential.

To put it bluntly, without Drake those bad guys wouldn’t make it anywhere near their objective. Not only do they fail to actually find what they are looking for without his help, the evil surrounding the treasure would be enough to see them off. In each Uncharted game, Nathan Drake is directly responsible for pointing the bad guys in the right direction and helping fight a way through to the evil artifact. 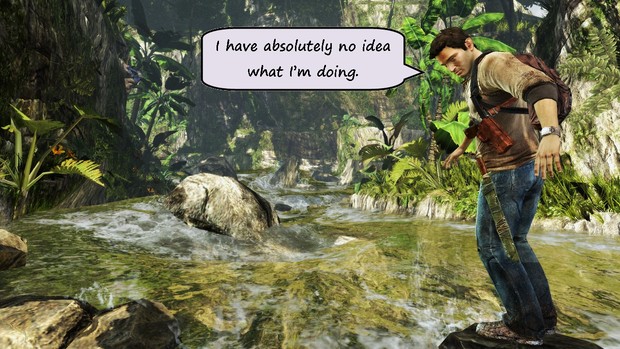 In Uncharted: Drake’s Fortune, Nate practically hands a rival mercenary the answers he needs to find El Dorado, instead of murdering him and his friends in the usual Nate Drake style. He then manages to escape and meet up with lady-friend Elena. By this point he is out-manned, out-gunned, he thinks Sully is dead and he has no idea that the treasure has evil properties. His reasons to carry on adventuring can be summarised in one sentence — I’ve got nothing better to do. When Nathan arrives on the island, the cursed inhabitants are making short work of the mercenaries, who can’t find the entrance anyway. It’s up to Drake to figure things out and clear the way, despite learning that what the bad guys are searching for is not worth finding. Sure, he manages to win in the end, but only just.

In Uncharted 2: Among Thieves, Nathan Drake is once again a henchman’s best friend. The super-strong, super-fast, yeti-mimicking Guardians of Shambhala would have cut the bad guys to ribbons had it not been for the bravery, skill and idiocy of our hero. Nathan also brings along the only object able to unlock the entrance to Shambhala and opens the way for the bad guys to stream through. What a nice man. Nathan makes a good show of ‘trying to stop them’, but he’s way more of a help than a hindrance.

In Uncharted 3: Drake’s Deception, Nathan’s behaviour is getting a little predictable. He follows the same logic — I’ll stop the bad guys by getting to the thing they are looking for first, then I’ll open the way for them. If there are any barriers or evil beasties blocking their way, I’ll be sure to clear a path! All the while he dutifully collects all the pieces of the key required to let the baddies near there treasure. In each different adventure, Drake’s overriding need to adventure and explore eventually hands another evil organisation an evil object. In every case Nate’s best course of action would be to stay at home. (I realize that’s not the premise for an Uncharted game, but he really should stay at home.)

And then there’s the destruction. He kills lots of people, true enough, but as a Teacher and a Historian I find Drake’s rough-shot approach to treasure hunting utterly appalling. When he isn’t desecrating ancient graves or setting fire to historic sites, Nathan wastes little time in reducing forgotten cities to ruin. I am aware that the end of each Uncharted game is merely complying with the age old cliche for ending action stories — the self-destruct style finale — but we can’t ignore the fact that wherever Nate goes, history gets crushed under his boots. 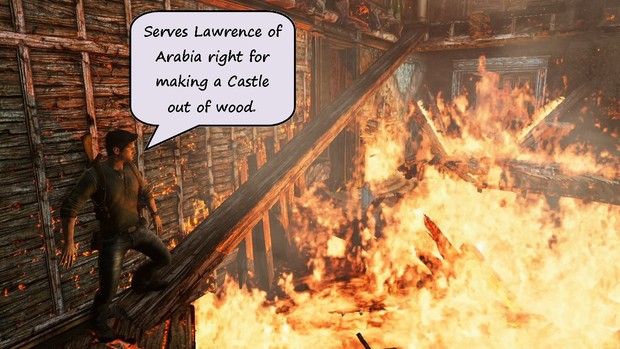 It’s not just large scale destruction of History; Nathan shows disdain for the little artifacts too. When exploring the world he discovers a significant amount of small, ancient artifacts, which he builds into a collection throughout each game. Do these hold any interest for Nate? Does the discovery of each treasure excite him? Nope. Each trinket is added to the pile without a second glance. By the start of the next game these items are gone. No explanation given. No final cutscene where Drake admires his collection of historic wonders. These priceless items should have been delivered to a museum. Instead, Drake most likely sold them off to the first person with money or dropped them down a hole somewhere.

What’s that? Oh yes… the murder. Alongside the demolition of priceless wonders, Nathan demonstrates a distinct hatred for his fellow man (for the record, the destroying History thing is way worse). There’s no real defence for Nathan Drake’s passion for gunning down and blowing up all those that stand in his way. Some might argue that he defends himself against an overwhelming enemy force, but you don’t blame the bees when someone sticks a hand in the nest.

It’s hardly like Drake has to walk the-violent path; in Uncharted 2 he is handed a tranquilizer dart gun. The game itself gives ‘our hero’ the green light to take down enemies quietly and without lethal force. Not only does Drake abandon the peaceful option by the end of the mission, the dart gun never appears again (unless you unlock it). Consider the stealth take-downs too. Occasionally the player will watch as Nathan bops a guard unconscious, but in the next instance they witness Nathan snap a henchmen’s head round, leaving him dead in the dust. No matter how you slice it, Nate enjoys being a cold blooded killer. 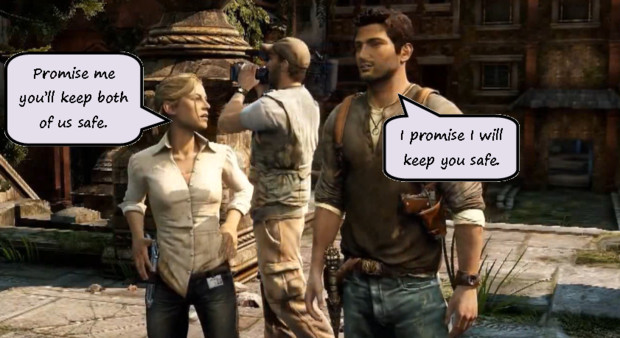 When he’s not killing baddies, Drake enjoys trying to get his entourage corpsified. The distinct lack of people around Nathan Drake is also a key indicator of the man’s incompetence and dangerous attitude. Apart from an aging, lecherous thief and a love interest who spends her time between games trying to distance herself from Drake, there are only a small number of people who go anywhere near our protagonist.

Nathan will lead these morons into the centre of a bullet-storm with a smile on his face. These poor fools inevitably find themselves maimed or murdered. By the end of the first act of Uncharted 3: Nate’s three remaining pals are starting to show the strain. They constantly turn to Nathan, asking whether this is all worth it. Each time, Nathan Drake uses the same puppy-dog stare and pleads with his companions to follow him ‘one last time’. And so they repaint the targets on their foreheads and follow the plucky hero into the murder zone.

There’s one more thing that Nathan Drake is persistently trying to destroy: himself. When he’s not ending lives and breaking property, Nate shows an innate attraction to self-inflicted pain. I’m trying to remember when I’ve seen him successfully walk in a straight line. Nathan can’t put five steps together before falling through rotten floor boards or rusted metal. Drake’s not having a normal day if he’s not slamming into walls or driving something off a cliff. With each life-threatening tumble, Nathan appears increasingly unsurprised by sudden serious pain. Oh bother, I seem to have punctured a lung, what a nincompoop I am. It must be difficult for Nathan’s enemies; fighting a man who has more contempt for his own well-being than they do. 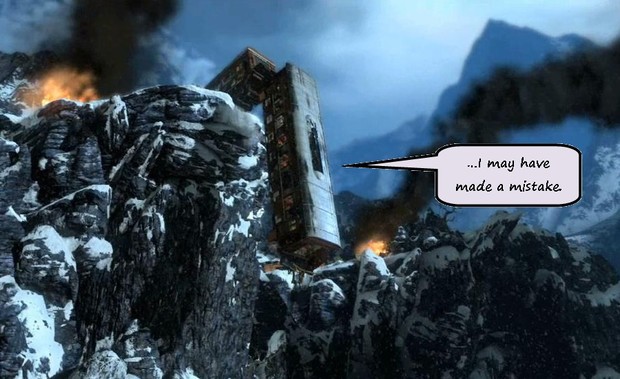 One last thing. It’s an obscure argument, but one which says a lot about Nathan Drake. Consider his name. Nathan Drake. Drake. Nathan chose that name (his birth name is currently unknown) and to the historian in me, that speaks volumes about the man’s character. At first glance you might think that our protagonist wanted to emulate a famous and heroic British explorer, a daring seafarer. But that’s not the full story of Sir Francis Drake. Oh he was a hero to the British, but to the rest of Europe — and especially the Spanish –Sir Drake was a notorious pirate. Technically he was a ‘privateer’, which essentially makes him a state-funded pirate, but the fact remains that Nathan Drake’s namesake was a pretty cruel, violent, thieving man in his time. Someone that present day Nate is clearly inspired by.

Whether you’ve played and/or enjoyed the Uncharted games, there can be no denying that Drake is the worst kind of hero. His only real achievements in each game are (a) he hinders the bad guys slightly more than he helps them, (b) he’s somehow still alive, and (c) he hasn’t managed to break all the historic artifacts known to man. Not only should we be worried about the death and destruction awaiting us in Uncharted 4: A Thief’s End, we might also tremble at the thought of a Nathan Drake without another adventure to distract him. How much damage could a bored Nathan Drake accomplish? Could we expect to find him pacing the halls of the Smithsonian or the British Museum, punching tourists and knocking over the exhibits? And no, I still don’t think I’m overreacting.

Does Nathan Drake’s behaviour trouble you too? Or do you consider him to be the plucky hero, love-able and clumsy? Maybe you have a theory on why he is the way he is.