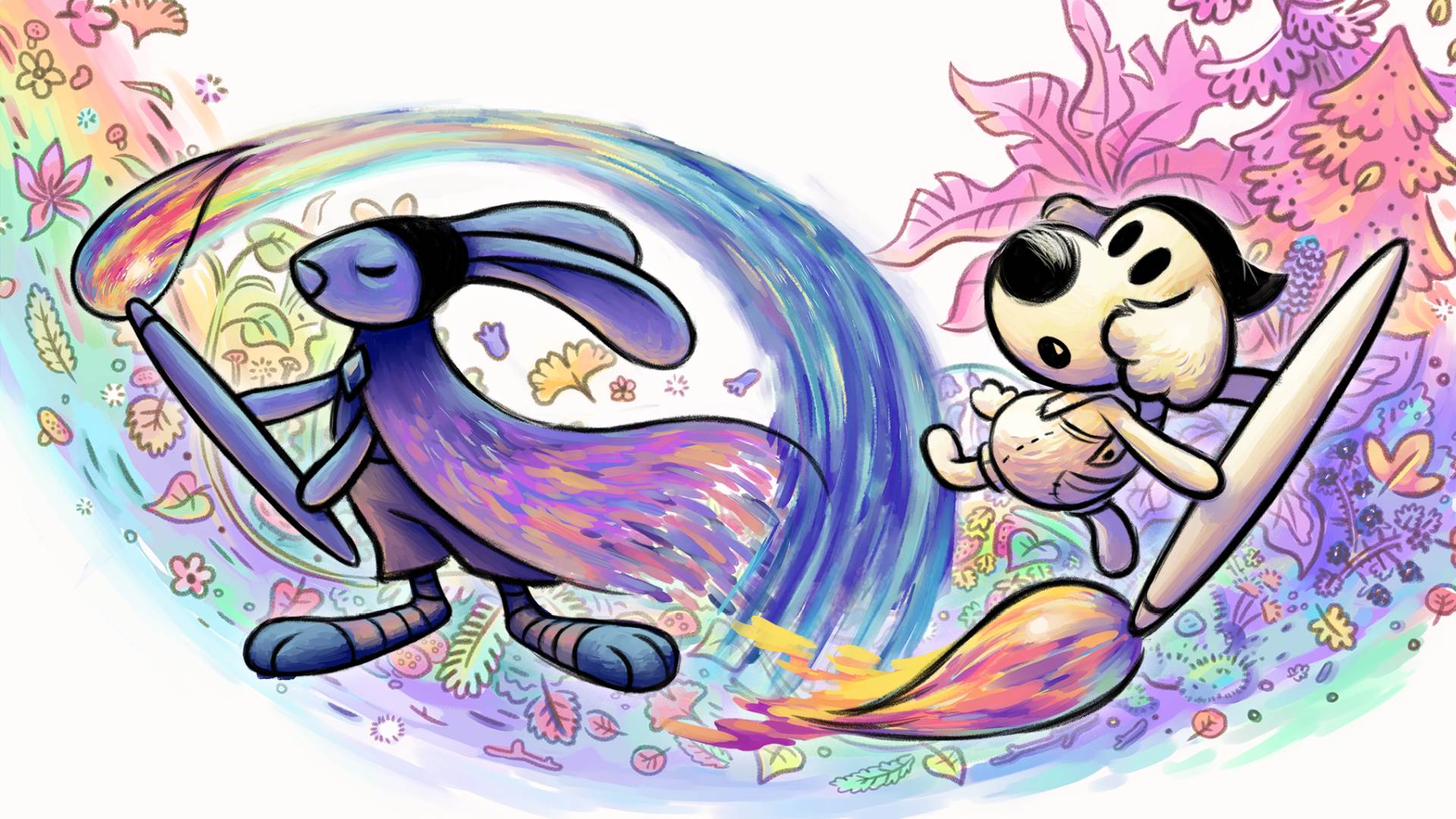 2018’s Wandersong was a game about a bard, who used the power of music and singing to change people’s lives for the better. There were grander stakes for sure, but at its core, it was about helping people and singing. A lot of singing.

Developer Greg Lobanov is back, but rather than dulcet tones, he’s turned to brushstrokes and watercolors with Chicory: A Colorful Tale, an upcoming game about painting the world. The titular Chicory is a hero, a legendary artist who wields the powerful and magical Brush. You don’t play her; you’re just her number-one fan, who cleans up after Chicory’s messes, until one day Chicory vanishes and you’re left in possession of the Brush in a world that’s suddenly devoid of color.

Wandersong was a game where you could make music anywhere. Lobanov tells me that Chicory was the “natural progression:” a game where you can draw anytime, anywhere. After a couple months of putting pieces together and arranging things, it clicked. But while Chicory is also about freewheeling creativity, it takes a different path; and that ended up creating not just a different kind of game, but a new outlook on what it means to be creative.

Lobanov says the biggest difference philosophically for him, between Wandersong and Chicory, is that drawing art is more anxiety-inducing to him than making music. The music in Wandersong can flit between moods and interpretations, but when given the chance to draw, there’s more of “explicit, specific communication” that happens.

“It makes it like, way easier for someone to say, ‘Oh, that drawing looks like what you want it to look like’ or doesn’t, and that makes the whole experience totally different,” Lobanov told me in a Discord chat.

The result is that Chicory is, from the demo I’ve played and in my time spent talking with Lobanov, a unique kind of approach to creativity within games. It has all the trappings of a 2D Zelda game, but with every screen being its own coloring book page and you the omnipotent artist, it’s fascinating.

It took very little time for some of Chicory‘s themes, of trying to walk in someone else’s shoes and impostor’s syndrome, to become apparent. Lobanov says that “trying to step into the shoes of a big person, when you don’t really feel like that’s who you are” is a big part of the game.

You’re also an overly helpful pup, who wants to make everyone else’s problems theirs to solve. It fits well within a game mold; steadily building up a backlog of quests and tasks to perform clicks well with a video game protagonist.

“I didn’t at the outset think the game is gonna be about a person having imposter syndrome,” said Lobanov. “But like, when you have this kind of janitor character who takes on this brush, and has this ‘hero,’ there’s just all these things that come up from that, that it just felt impossible not to start talking about.”

But while Chicory is dealing with some tough ideas, it’s also a pretty cheerful game all around. Animals have adorable food names, including your controlled character, whose name is your answer to “what’s your favorite food?” That’s a little inquiry that opens the game, drawing inspiration from others like EarthBound, to get you in the right state of mind. Themes might get tough, but this world is also one of good cheer, too.

“I feel like that’s closer to what real life really is, right? Like, it’s not like things are always just sad, or just serious, or just funny, or just happy, right?” said Lobanov. “Everything always comes together. So that’s how we do it here.”

When I asked Lobanov how he’s seen players respond to being given the freedom to paint any and everything around them, he says they’ve been responding in a “terrifyingly broad set of ways.”

At first, Chicory was a coloring book game, and the camera perspective wasn’t even set in stone. Side-scrolling platformer was even an option at one point, before Lobanov realized that top-down was what it had to be, because if the camera is pointed straight down, the entire screen becomes a canvas. “And then I was like, ‘Oh wait, you know, this looks kind of like a Zelda game,'” recounts Lobanov. “‘What if I made a Zelda game?'”

This dichotomy, between chasing the main quest and fulfilling your personal propensity for painting all over the blank page in front of you, left a wide gap between for players to explore. Lobanov says that while some players just happily flit along the main questline, doing what they need to get by, others get completely consumed in painting and coloring every last detail of every screen.

“They’ll get a situation where a character is like ‘oh my gosh, there’s a huge problem in the next town and you have to go help us right away,'” Lobanov describes. “And they’ll be like ‘okay, yeah’ and then they’ll start coloring the flowers and the clouds and whatever. And they’ll just spend an hour drawing the perfect little spiral. And they’ll be like, ‘oh wait, oh my god, there was something really serious going on. I don’t remember what it was.”

“I guess I’ll just go color some more,” he adds, laughing. Yet despite the split, coloring becomes a surprisingly effective mechanic, for more than just the appeal of a coloring book game. Lobanov says he was surprised over and again at how many ways different ideas overlapped to create a pleasant blend. Color, for example, can act as a progression marker. You can recognize, at a glance, whether you’ve already explored an area or not by whether it’s been colored in.

You can even leave markers for yourself; maybe a smiley face marks a treasure, or a spiral marks a puzzle you want to come back to later. One of the titanic tasks of Chicory‘s development came in near the end of the process: when your hero-to-be pulls out their map, you can see everything you’ve colored in. It’s a mini-representation of what your actual overworld looks like.

That might sound like a tiny thing, but Lobanov stresses it took a lot of work to make happen. It ensures everyone’s map is their own, and their experience is marked in-game as their own. It’s not just the game map, it’s the map you’ve created.

“There’s just a million things like that,” Lobanov says of Chicory‘s colors offering guides for exploration. “And I kept asking myself, why hasn’t anyone done this game before?”

Lobanov also reassures me that despite being a game about painting, Chicory is not only deaf-accessible, but colorblind-accessible as well. Specific colors aren’t used to solve any puzzles—the act of painting is what matters, and its color is purely an aesthetic choice.

The joy of painting

There’s simply a playfulness to Chicory. Lobanov describes how he used tools from Wandersong to animate the environments, so that things would animate to the rhythm of the music. The score, composed by Celeste composer Lena Raine, is already a joy, and the world of Chicory responds to it. Objects swaying in the wind will move slower in response to slower-paced music, while more chipper beats will be met with faster wind.

“Even though the music isn’t the gameplay center, it’s like it’s driving a lot of the ambient animation and just vibe in the world,” Lobanov says.

Chicory draws on a number of inspirations. It’s about creativity and made by creatives, so it knows what it feels like for a character to be tasked with following the footsteps of a creator they idolize. It’s a coloring book game, encouraging free expression using your brushstrokes and colors, while also incorporating elements of Zelda (Lobanov says he played back through the Game Boy Color version of Link’s Awakening, to understand what made it so sweet).

It’s accessible, cheerful, and always supportive. Circling back to Lobanov’s comments about how drawing can be more intimidating than music, he says there was always a line to tread in ensuring the game doesn’t comment on the player’s art in a way that could “give someone a bad day.”

Chicory is simply about the joy of coloring, of being greeted with a blank canvas full of simple lines and shapes, and then being asked to fill the spaces in-between. It is also a perfectly enjoyable Zelda-like, with exploration and cheerful locales to explore, but the physical, almost tactile presence of paint and brush in the world is what makes it so worth watching out for.

“Maybe after it comes out, people will steal the idea,” Lobanov jokes about players coloring the map to guide their exploration. “I hope they do, because I want to play more like it.”

Chicory: A Colorful Tale is out this spring.