EVR opens with a pilot in the cockpit of a small ship, docked in a cramped launching tube. After a short countdown, the ship is fired out like a bottle rocket, the compact hangar giving way to the sheer expanse of space, littered with fragments of asteroids, a scuttled Minmatar Tempest gunship, and the remains of an ancient cathedral.

It’s one thing to move a character or a ship through a three-dimensional space, but it’s another to strap on a virtual reality headset and be able to look left and right into infinity, to look down and see a set of hands clutching a flight stick.

I imagine being launched from the Battlestar Galactica in a Viper would feel like the first thirty seconds of EVR.

It’s not long before my screen starts flashing red, my cue to start swearing at no one in particular: some red-shipped scumbag is tracking me with a salvo of missiles. I swivel my head over each shoulder, curse some more, and then glance overhead, the space around me filled with friends and foes, neon lasers, and space debris, but no incoming rockets.

I wait a few more beats and then accelerate, hoping to outrun whoever and whatever is chasing me. It works, and I live to go on a warpath of my own: I pick off three or four red enemy ships before my luck runs out.

After my EVR demo, on my way out of the press room, I run into a man named Nate Mitchell. He’s the vice president of product at Oculus VR, the company that Kickstarted the virtual reality headset that EVR uses. He asks me if I liked the demo, and I say yes.

“The Oculus isn’t even out yet, and they’re already making stuff like this,” he gushed. “Can you even imagine?” 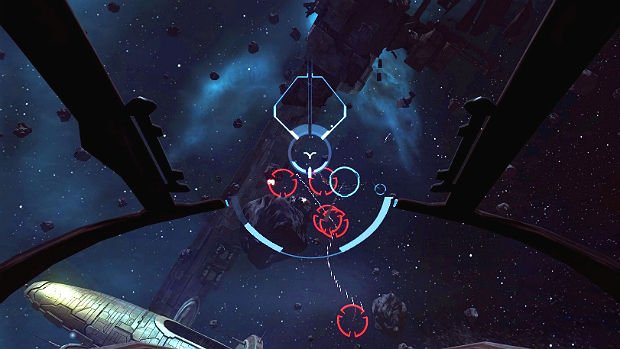 Andy Robinson is an artist at CCP Games who works on EVE Online. By his own admission, he doesn’t get many chances to talk to the media — that’s for lead designers and executive producers. But when he sat down at a table full of journalists to chat about EVR, I was more than happy to listen. Put plainly: EVR is a prototype of a virtual reality spaceship dogfighting game built for the Oculus Rift that uses some assets from EVE Online.

It was built by a group of nine developers and artists in accordance with what CCP calls “the 20% rule”: free time during normal working hours that can be used on personal projects and cool ideas. CCP actually contributed to Oculus’ wildly-successful Kickstarter and had dev kits on hand. Robinson explains that keeping all sorts of hardware around the offices is simply part of CCP’s culture and that their Reykjavik offices are full of things to tinker and experiment with.

The project started as a neat proof-of-concept, but as more and more CCP devs got involved — and as they realized how fun it was — the team made a hard push to have a three-minute demo ready for Fanfest 2013. The entire project took seven weeks of nights, weekends, and 20% time, and the result is a thrilling look at what could be in store for virtual reality-enabled videogames. 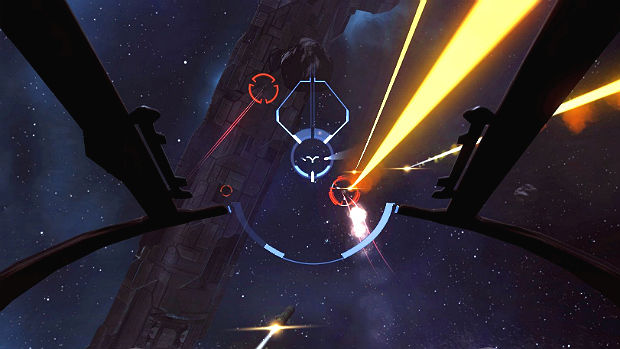 Robinson estimates that 85% of the game’s art was made from scratch. EVE Online’s ships didn’t scale well enough to be used with EVR’s depth of field, and there weren’t any existing assets for the cockpit or launch tube.

There’s no denying that part of the thrill of EVR is the simple act of flying through space, of watching it open around, above, below, and behind you. During early playtests, people had to be taught to look around with the Oculus Rift headset, which Robinson called “being deprogrammed.”

More than that, though, EVR’s real hook — and the great thing about virtual reality in general — is that it manages to handle lots of complexity with a small number of elegant, simple controls. Not only do the ships travel at a fixed speed, but the camera and missile-guidance mechanics are both controlled by moving Oculus Rift headset.

The end result is a full-scale, first-person, virtual reality dogfighting game that only uses three buttons: two triggers to fire lasers and missiles, and one joystick to steer — piloting a ship in genuine virtual reality is less complicated than playing Call of Duty. 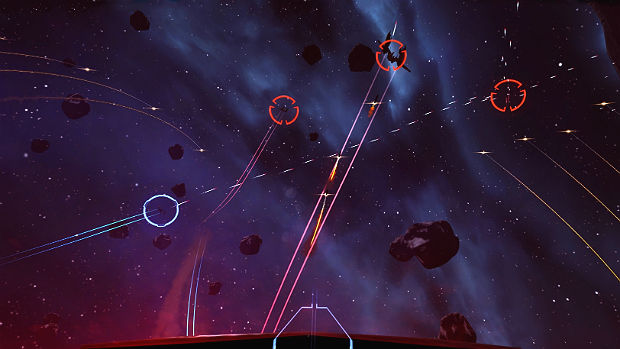 The goal for EVR was to re-create the feel and atmosphere of EVE Online and “subvert it, open it up to a new style of play,” explains Robinson. EVE Online executive producer Jon Lander agrees: “We wanted to expand what’s going on in the EVE universe.”

In that sense, it’s possible to contextualize a project like EVR alongside Dust 514: projects designed to drill down to the more granular aspects of the EVE Online universe, to explore the small cogs that turn EVE’s vast economies and war machines.

Unlike Dust, which was formally released earlier this week, CCP’s official stance seems to be that EVR is doomed to be a one-off experiment, a curio for Fanfest 2013 attendees to reminisce over. There are “no current plans to take it any further,” Robinson says.

For those interested in playing EVR at some point in the future, however, there remains hope: in 2005, an in-house team developed an atmospheric flight prototype that allowed players to pilot down to the surface of New Eden’s numerous planets. The idea was never really incorporated into EVE Online, but it became the basis of the dropships in Dust 514. EVR may have a similar fate.

Nate Mitchell was also on hand during the final Fanfest keynote to sing EVR’s praises. He called it the first true multiplayer virtual reality game while Hilmar Veigar Pétursson, CEO of CCP, mused that maybe “something will come of it.”

“No matter what happens, the guys working on this are going to continue,” Robinson told me with a hint of defiance. “This is a passion for us. Given time, we can make this much, much better.”