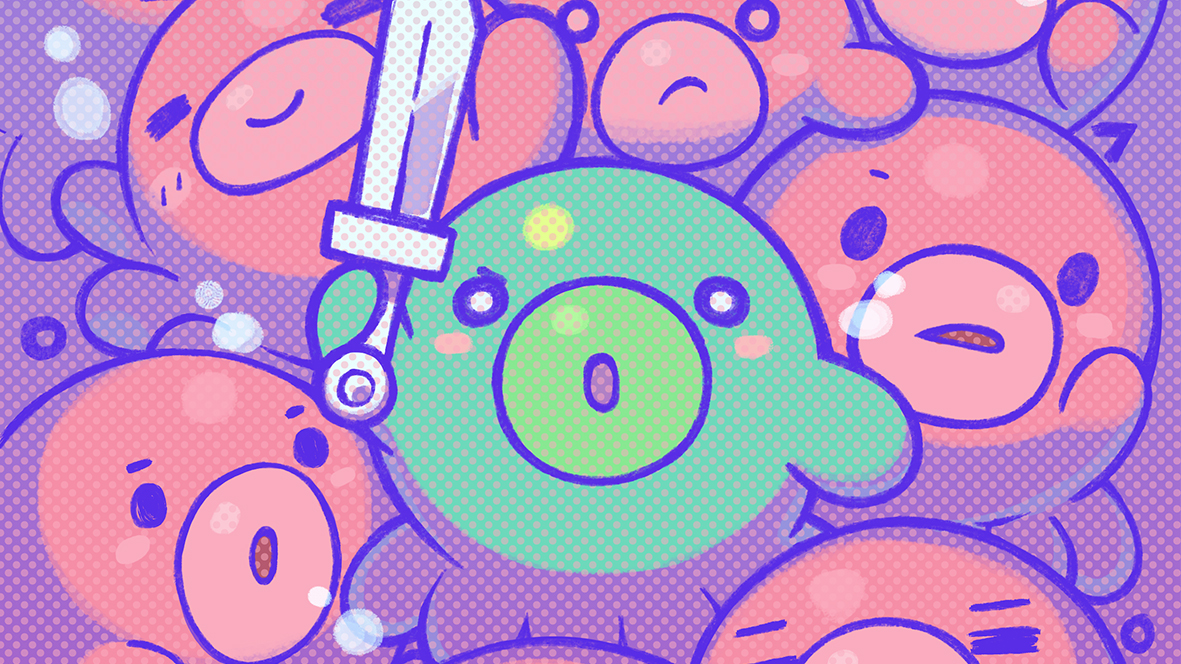 On November 13, 2015, a highly coordinated terrorist attack wrought havoc across Paris, France. In just one hour, terrorists struck several locations, including the Stade de France and the Bataclan theatre with suicide bombings and mass shootings. 130 people were killed in the attacks. Seven attackers also died and the suspected mastermind behind the tragedy was killed five days later in a raid.

At the same time, French indie game developer Christophe Galati was hard at work on his debut game Save me Mr. Tako! He started development the year prior in what was the 25th anniversary of the Game Boy. He had big ideas for it, but as he was a student at Isart Digital, Galati decided to start small and develop the game as an endless runner. After receiving positive feedback on his design, he returned to his original concept and began working on the title as a full-blown platform adventure game. He would end up devoting all of his free time to the development of Save me Mr. Tako!

Galati was already putting a lot of his hopes and fears into the story of the game, crafting a tale about tolerance and fighting for a better world. Creating games had been a coping mechanism for him since he was 12, and after the attacks in Paris, he’d use Mr. Tako! to express his feelings about the world around him.

“I lived in Paris during the attacks, and Tako-San absorbed a lot of my fears and concerns about the world we live in,” Galati explained. “I was designing the human city Sarona when it happened, so the tone of the game shifted at this point, it started to reference ideas like obscurantism and it became even more personal for me. The game is not only about the war between octopus and humans, but also the concept that humans are divided into kingdoms that are at war with each other, too. It’s not about finding out who the bad guy is, but more about how uniting and accepting people’s differences can make the world a better place. My goal was to create a universe and characters that will resonate with players, and perhaps help them overcome their struggles so they can live their own great adventure.”

In the aftermath of the attacks, Parisians came together to comfort one another. They opened their homes to people who were too scared to return to theirs. Campaigning for an upcoming election stopped temporarily. French flags flew off store shelves and thousands of people submitted applications to join the French Army.

Galati threw himself into his work. For the next three years, whenever he wasn’t at his paying job, where he created ad-games, he was working on Mr. Tako! During this time he visited various industry trade shows, showing his game to anyone he could. Not only did this build up a fanbase for his work-in-progress, but it also introduced him to the indie community at large, inspiring and motivating Galati along the way.

“I met a lot of other indie game developers along the way and I’m grateful that I can now call many of them my friends,” he said. “The first indie game that inspired me was Cave Story, as it was one of the first times I felt like you can make a very good game mostly on your own. Also, when I saw Shovel Knight getting so much success, it gave me more confidence in what I was doing. I was also blown away by Undertale, which reminded everybody that you can make people feel many emotions, even with a simple aesthetic. With Save me Mr Tako!, I wanted to create something in the vein of those games, but with my own spin on it.”

The biggest spin Galati is putting on his debut title is unquestionably the art direction. Every day at Destructoid, we get numerous emails from indie developers around the world pitching their products and a great number of them feature 8- or 16-bit inspired graphics. Not many are taking the same route as Galati. Save me Mr. Tako! is 8-bit inspired, but it’s a game with deep roots in the very specific Game Boy/Game Boy Color/Super Game Boy era. Galati was born in 1994 and didn’t receive his first Game Boy, a Game Boy Color, until around the turn of the century. 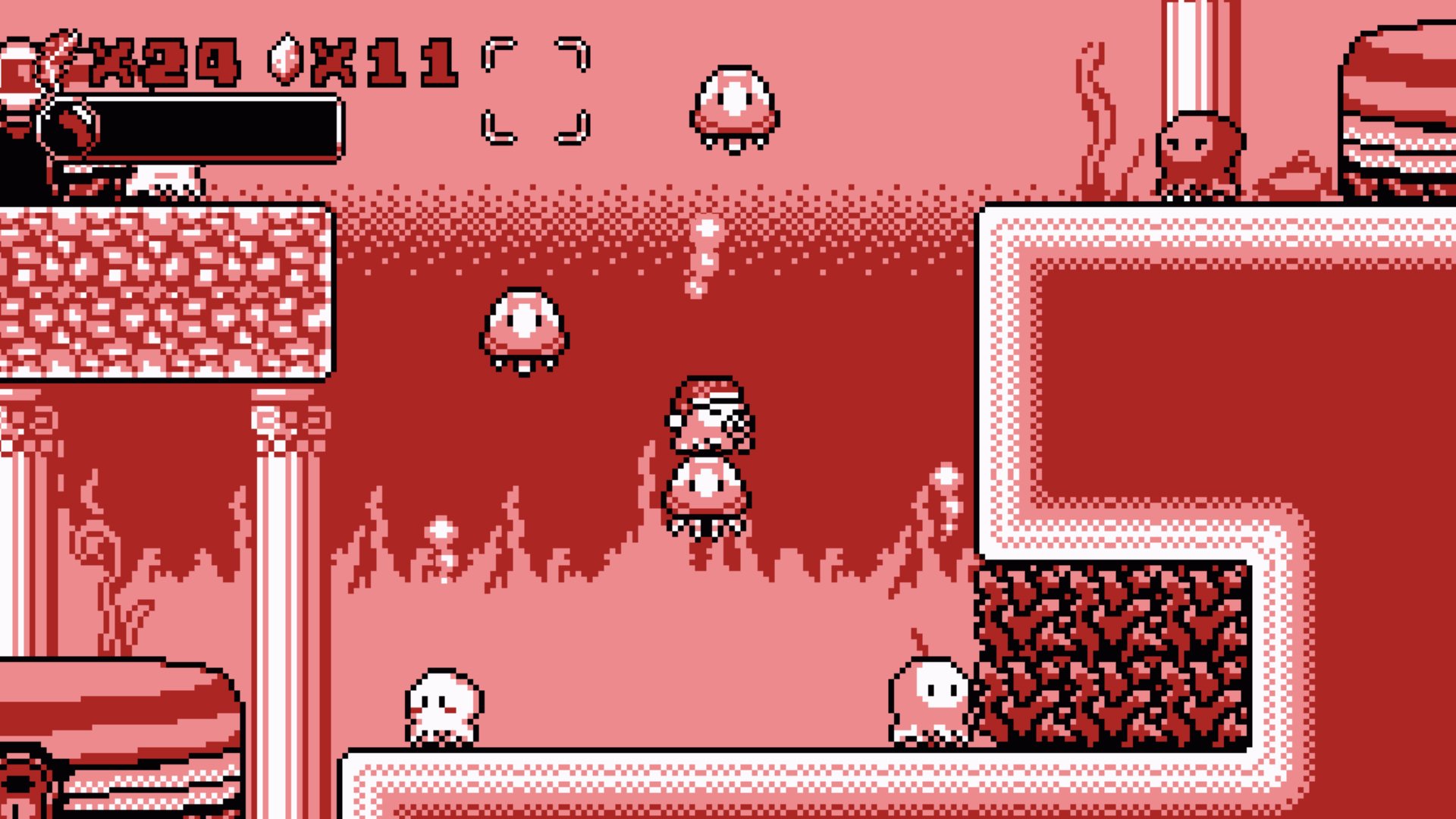 “I remember getting the GBC for my birthday, and it was the same year the Game Boy Advance was released,” Galati said, “so I was kind of disappointed at the time, haha. My big brother is a game collector, so early on, I had the chance to play many retro and JRPG games, especially from Nintendo. I grew up in a district of buildings in France where all the kids were playing Pokemon, so I have a lot of great childhood memories from this time.”

Those joyous memories, along with conceiving the idea for the game during the 25th anniversary of the Game Boy, pushed Galati to make the title an homage to a bygone era of gaming. Developing it in Unity, he walked a fine line between making a game too retro and one that could appeal to younger gamers who may have never seen a Game Boy in person.

Save me Mr. Tako! can be played in either widescreen or 4:3, the latter of which will feature 10 different backgrounds similar to what was available on the Super Game Boy. There are 17 different color palette options for the graphics, including the monochrome, ‘Game Boy green’, a Pokémon-invoking blue and red, and my personal favorite, the cotton-candy looking pink and blue.

For anyone who grew up in the era Mr. Tako! is aping, it’s a veritable smorgasbord of throwback aesthetics. Galati knows his game is bound to appeal to older gamers, those who remember sticking a copy of Link’s Awakening in their Super Game Boy so they could play it on the big screen, but he’s also found a growing number of fans quite younger than that targeted demographic. 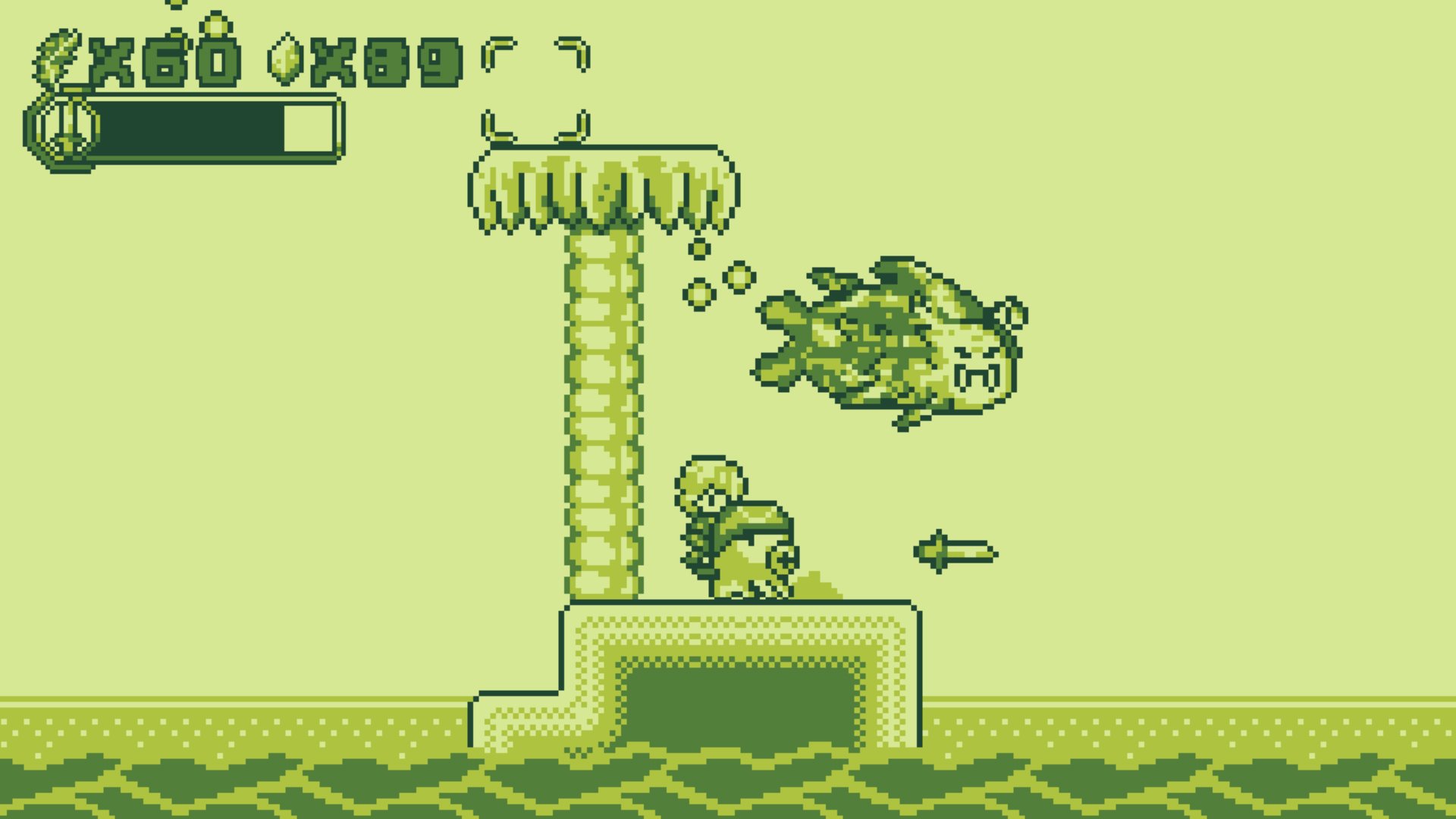 “During the development process, I attended numerous gaming events and noticed that many young kids were drawn into the look of it and enjoyed what they played, even with the monochromatic graphics. It was fun to explain to them what the Game Boy was, and to see parents bring their children and talk to them about the games they used to play when they were younger, using Mr. Tako! as an example. The Game Boy had such a long lifespan, too, so this aesthetic speaks to many different people. I truly believe that this system and this era of video games had something magical about it, that can still touch the hearts of people who either missed it or were too young to experience it the first time.”

It was at one of those gaming events, Tokyo Game Show in 2016, that Galati got his big break when he met indie wunder-publisher Nicalis for the first time. Though he’d been in contact with the company since the original demo, it was at the show he was first able to discuss bringing the game to Switch. Soon after, he signed a deal with Nicalis, quit his job, and started work on Save me Mr. Tako! full time.

“The last year of development was the most challenging, but probably the most rewarding too. I left everything and returned to my hometown so that I could focus more and work on the game full-time, allowing me to finish all of the content. Nicalis became more involved around this time and they allowed me to repay my student loan thanks to an advance. Sometimes I feel like this was an especially risky route to take and that it might not be the best example for beginners because of all the sacrifices I had to make, but I’m extremely proud of the journey I took and the game I created.” 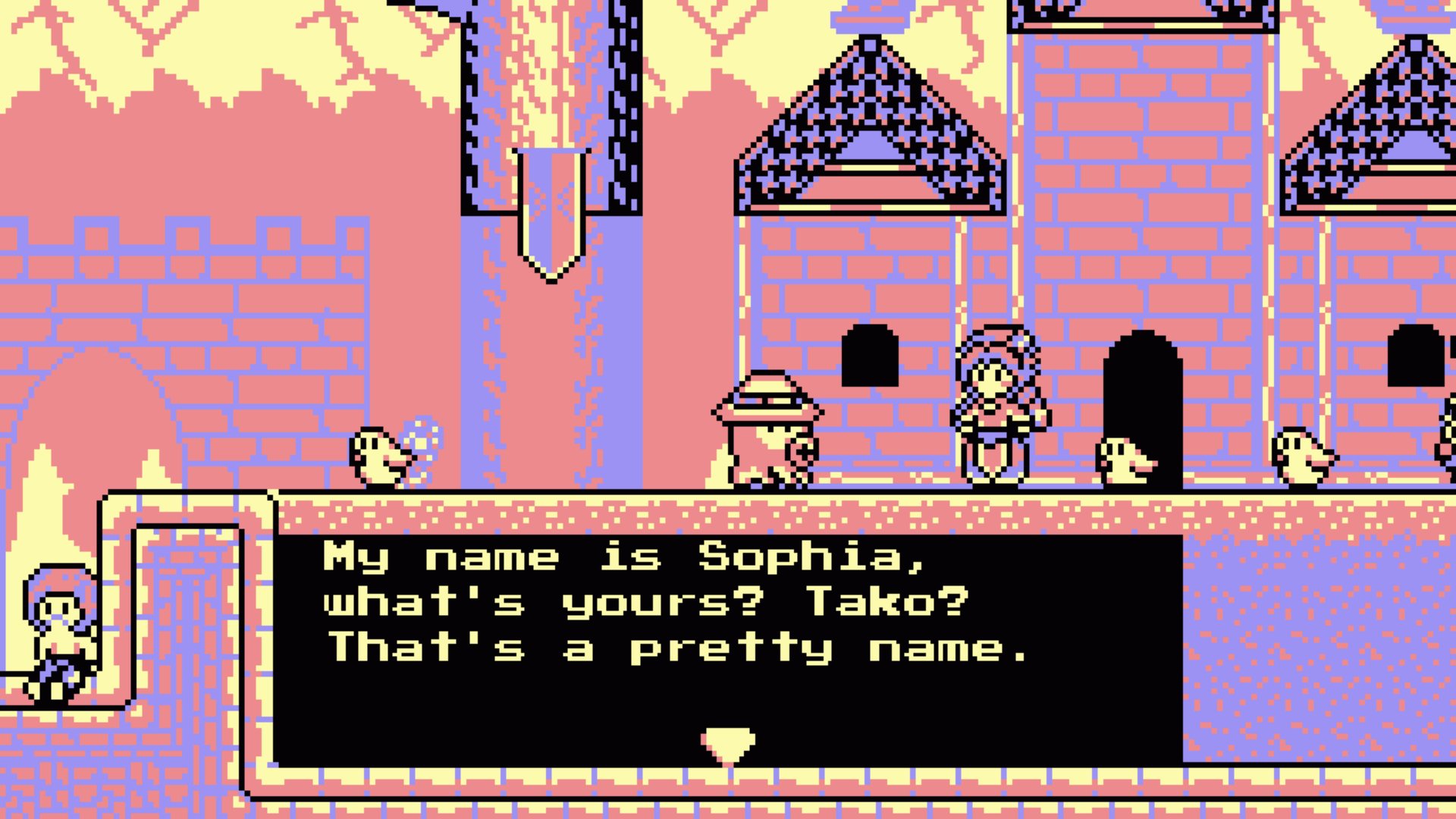 His journey comes to an end on October 30 when Save me Mr. Tako! hits the Nintendo Switch eShop and Steam. Galati says he’s excited to see how people receive the title, something that features so much of him, his views, and even his politics. We often hear today how some on the internet want politics of any kind out of gaming. That’s a sentiment Galati doesn’t agree with.

“If we want video games to be seen as an art form, we have to express our ideas from our creative points of view, even if they might not appeal to everyone. It’s the old debate of industry vs. art, and thankfully we have some great past examples of how we can do both.”

Whether or not players give Save me Mr. Tako! a warm welcome, Christophe Galati is extremely proud of what he was able to accomplish. With the help of Nicalis and composer Marc-Antoine Archier, who did the soundtrack to the game, he was able to fully realize an inkling of an idea he got one night eating takoyaki, a Japanese biscuit made of flour, tempura, and diced up pieces of octopus.

“I got my first vision for Save me Mr. Tako! the first time I ate takoyaki in a restaurant in Paris called Happa Tei! It became one of my favorite meals, so I learned how to make Takoyaki myself. A friend bought me the machine and now I host a lot of Tako-parties. Most of the time I use shrimp instead of octopus, but I can’t help myself and still eat octopus sometimes… Shhh¦ don’t tell Tako-San!”

Save me Mr. Tako! is available for pre-purchase now on the Nintendo eShop. Any Switch owners who do pre-purchase the title will receive 30% off the normal retail price.