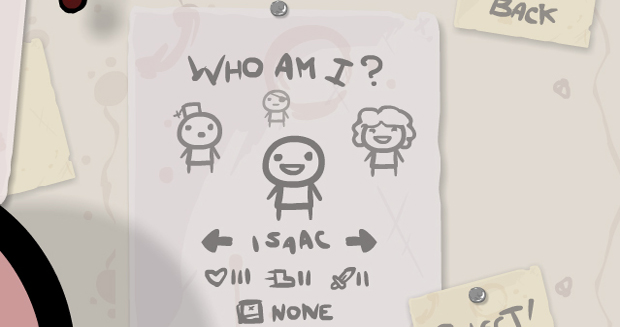 Imagine you’ve just spent the past two years of your life working on a videogame. You’ve sacrificed your money, your time, your physical health (to the point where you’ve ended up in the hospital at least once) and your sanity to make this game a reality. If it fails, you’ve sent yourself and your family into potential financial ruin, not to mention your career and your life.

Then the game comes out. It’s a critical success, getting 9s and 10s from major outlets. Then the sales start coming in, and you’re overwhelmed with the realization that all the hard work was worth it, and that you’re definitely not going to starve to death any time soon.

After fighting so hard, putting so much on the line, and finally getting to the end of that long road, what do you do with yourself? Where do you go from there?

If you’re Edmund McMillen, you immediately start making a videogame about abused children — based on the four classes of Dungeons and Dragons — fighting through a seemingly endless tribute to the original Legend of Zelda, working their way toward a life-or-death showdown with (who else?) their own mother.

In case you haven’t been keeping up, The Binding of Isaac is the game we’re talking about here. I recently got to catch up with McMillen about the development of the game, and its connections to Tom Hanks, Satanism, and other magical things. Here’s the first half of this (probably) two-part interview:

How long have you been working on The Binding of Isaac, and what aspects of development are you solely responsible for?

We have been working on it for about two months — probably three full months of development total when it’s done. I handle design, art, and story; Florian’s on the code but also helps out with design.

How does it feel to be working on a game that’s less difficult to develop and less financially risky, now that you’ve worked so hard on, and (hopefully) reaped such great financial rewards from, Super Meat Boy?

It feels great. I actually started Isaac when Tommy [the other half of Team Meat, creators of Super Meat Boy] went on a vacation, because I felt like working on a small prototype would be a bit of a vacation for me. Turns out, neither of our vacations turned into what we expected, but either way, a small-scale project where you don’t have to deal with business people and marketing is a hell of a lot more relaxing, and overall, more fun. Isaac originally started as a “game in a week” but ballooned into this little monster. It’s also a way for me to prototype some design ideas for the next Team Meat game.

I’ve read that The Binding of Issac is about a little naked boy who, after being trapped and ritualistically tortured by his mother, escapes from the basement of their family home in order to kill her, before she kills him first. Is that about right?

Yeah, that is about right, but the abuse isn’t ritual abuse. His mom is a Christian.

I’ve also heard that the game was influenced by both religious fanaticism, and the scare tactics from the 1980s that tried to link heavy metal, Dungeons and Dragons, and videogames to violent symptoms of mental illness and Satanism. Please tell me I heard that correctly, and elaborate as you see fit.

It’s hard to elaborate on it, but yes, the majority of themes in Isaac were inspired by ’80s Christian-right scare tactics and all that weird Satanic cult mass hysteria. I’m not sure how much of it will translate to everyone playing, but it for sure was the main inspiration for the game’s theme.

Is it true that out of the four currently planned selectable characters in the game, that the puffy-haired one is based off of Tom Hanks’ character from Mazes and Monsters?

Just looked that up, and it looks awesome. But no. The unlockable characters in Isaac were all inspired by the four main classes in Dungeons and Dragons and the four suits of the tarot.

That’s it for today! Tune in tomorrow, when McMillen shares more about The Binding of Issac‘s difficulty curve, its ties to the Legend of Zelda series, and much more.