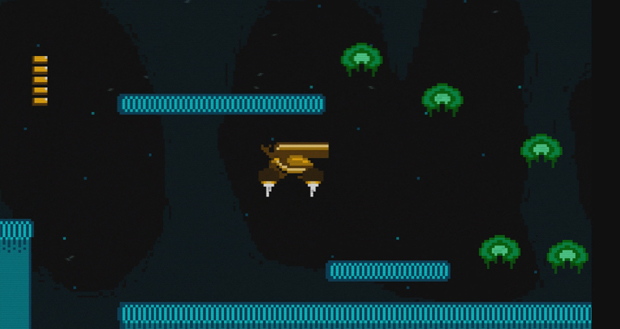 So many of us love videogames but are intimidated by the idea of making them. Devi Ever has taken on the problem as part of her self-declared purpose in life. She wants people to make videogames. Literally all the people.

I was emailing with Devi in email about games, game jams, and her status in the industry, when she suddenly launched a whopper of text at me. It was a spontaneous eruption of love for game design. With Devi’s permission, I’m reproducing that email below.

With all the noxious garbage going on in videogame enthusiast culture right now, I figured you might want to focus on the pure passion for games for a bit. Sometimes its easy to forget that that’s why we’re all here.

I love hosting game jams but I was getting tired of organizing more “general public” ones because there is a lot of time taken up dealing with organizing, promotion, answering questions, and all the minutia required to run a really successful jam. So I decided to start hosting “personal” jams. Pretty much the idea was going to be that I would spend every weekend hosting a #devijam in which I challenged my self to make a game based on something that inspired me, and then anyone else could do the same, but it would be completely casual — no hosting site, no judging, no biggie.

The first #devijam was to make a game inspired by SimCity. It was going to be a 48 hour jam and unfortunately the time constraints end up making it less fun and I almost considered quitting doing #devijam’s. The thing is, I had a pretty great game idea in the works. It was a weird other-dimensional-alien take on SimCity, but 48 hours just wasn’t enough time. Here’s a screenshot of a work in progress. It may not look like much, but games in the prototype stage rarely do.

Anyhow, it occurred to me I should just make #devijam even more relaxed and push forward. So for #devijam 2 I decided that making a game inspired by Blaster Master would be the next challenge. The reason I chose Blaster Master is because it’s a game that I’ve loved since a kid for it’s amazing gameplay, graphics, and sound, but I feel is lacking a good storyline. Also, the combat  and A.I. are incredibly limited and uninteresting in my opinion.

So I started up #devijam 2 and decided it’d be an open-ended jam, so anyone can participate as they wish whenever for whatever reason however they want.

Eventually I found time to start working on my #devijam game, and my initial goal was to simply create the basic tank behavior of Blaster Master. In the process of creating the tank, I finally had the chance to play Heavy Bullets and was very disappointed that the game wasn’t literally about slow moving big bullets. For some reason I saw the big bullets and heard the name and just kinda assumed that. That inspired me to take the idea of big slow moving bullets and have that be the gun on the tank.

From there I decided to concentrate on the polish of the game and game feel first and foremost. One thing I’ve learned in my year of being a video game developer is that if you can make the simple act of moving your character around an enjoyable experience, then the rest of the game design will be icing on the cake. I was greatly inspired by Jan Willem Nijman’s (of Vlambeer) talk, “The art of screenshake”, in which he goes into great detail about how game polish and feel goes a long way to make game more enjoyable.

That coupled with my experiences playing the game Samurai Gunn, which uses a minimal amount of pixels and animations to create a very dynamic gaming experience led to the initial polish I gave the tank. A surprising amount of time and behavior is attached to the tank’s movement and related animations.

Once I had finished the tank’s design, and the game was feeling incredibly fun to play, even without enemies, I realized the project was going to be something I wanted to invest more time in. So I finally decided to give it a name. I’ve been slowly (I mean agonizingly slowly) learning Japanese and have become “okay” at Hiragana, the one of the sets of Japanese symbols for vowel / consonant combinations, so I began to look up names related to tanks and came across the amusing alliteration of which reads as たたかい-タンク … or Tatakai Tanku. That translates to “Fight Tank”.  Obviously my Japanese sucks so the symbols / grammar might be a bit off, but with all of the bad English translations of Japanese games in the past, I thought it’d be an amusing nod to that.

From there I started creating basic enemies, damage, etc. and when the time came to create the character that would jump out of the tank, I found myself suddenly inspired to do something I had been wanting to do for some time, which is to program a character that had similar gameplay to Samurai Gunn. I loved the idea of getting out of your slow moving unyielding, huge bullet shooting tank, and then being a fragile, fast moving, sword slashing character.

… and that’s about where I am now in development. I am going to finish implementing the Samurai Gunn style out-of-vehicle combat, then create a mid-sized world where you fight as both the tank, and as the sword wielding character against a horde of enemies, two mini-bosses and one final boss.

From there I intend on putting the demo up on steam, and moving forward on fleshing out the game into a full fledged adventure including multiple power ups for both the character and the tank, as well as an immersive, emotional storyline that I hope will touch people, and gameplay that I hope will rival that of Blaster Master and Samurai Gunn!

On a more technical note, the game’s resolution is 228 x 128, a widescreen format of the 128 x 118 resolution I had normally been working in recently. I am using the NES color palette with a few off-palette colors here and there when I need more depth or brightness to a color.  It’s a color palette and resolution I have become absolutely in live with, as I feel it gives a real sense of an era that could have existed between the Atari and NES.

You can follow the progress of Fight Tank here.