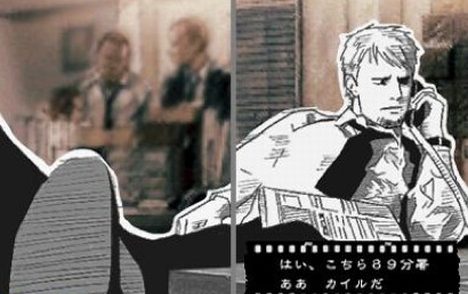 Wowee zow. Anime fans and DS fans alike, lend me your ears. DS Fanboy posted a bucket of fantastic shots from the upcoming Hotel Dusk. Seeing games like this hit the market thrill me. In a sea of generic first person shooters, endless sequels and RPGs that make you wince with their cliches, a game like Hotel Dusk sticks way out. I remember feeling very much the same way discovering Ico and Okami for the first time. The developers took a lot of chances with the style and format of these games, and often they were noticed for their bravery by gamers looking for something more than just the norm, not to mention the reaction of the industry. It was a sad day when Clover announced the dissolution of the studio due to “extraordinary losses.” Ouch. Sometimes there’s a way to put it nicely, and sometimes there just isn’t.

Regardless of that sad loss, there are more companies making unusual games now than ever before. Katamari and LocoRoco seem to be paving the way for a new genre of quirky action/puzzle games that torture you with cuteness and music you can’t stop humming. Shadow of the Colossus definately carries on the torch that Ico lit in the first place. It seems like the American tolerance for games that only Japanese gamers could get into before is going up and up. Personally I couldn’t be more thrilled, as I’ve played enough bland RPGs and platformers to last  three lifetimes. The kookier the offering, the better.

Japan, if you’re listening, I think a Gloomy Bear game where I beat children for points would be super.