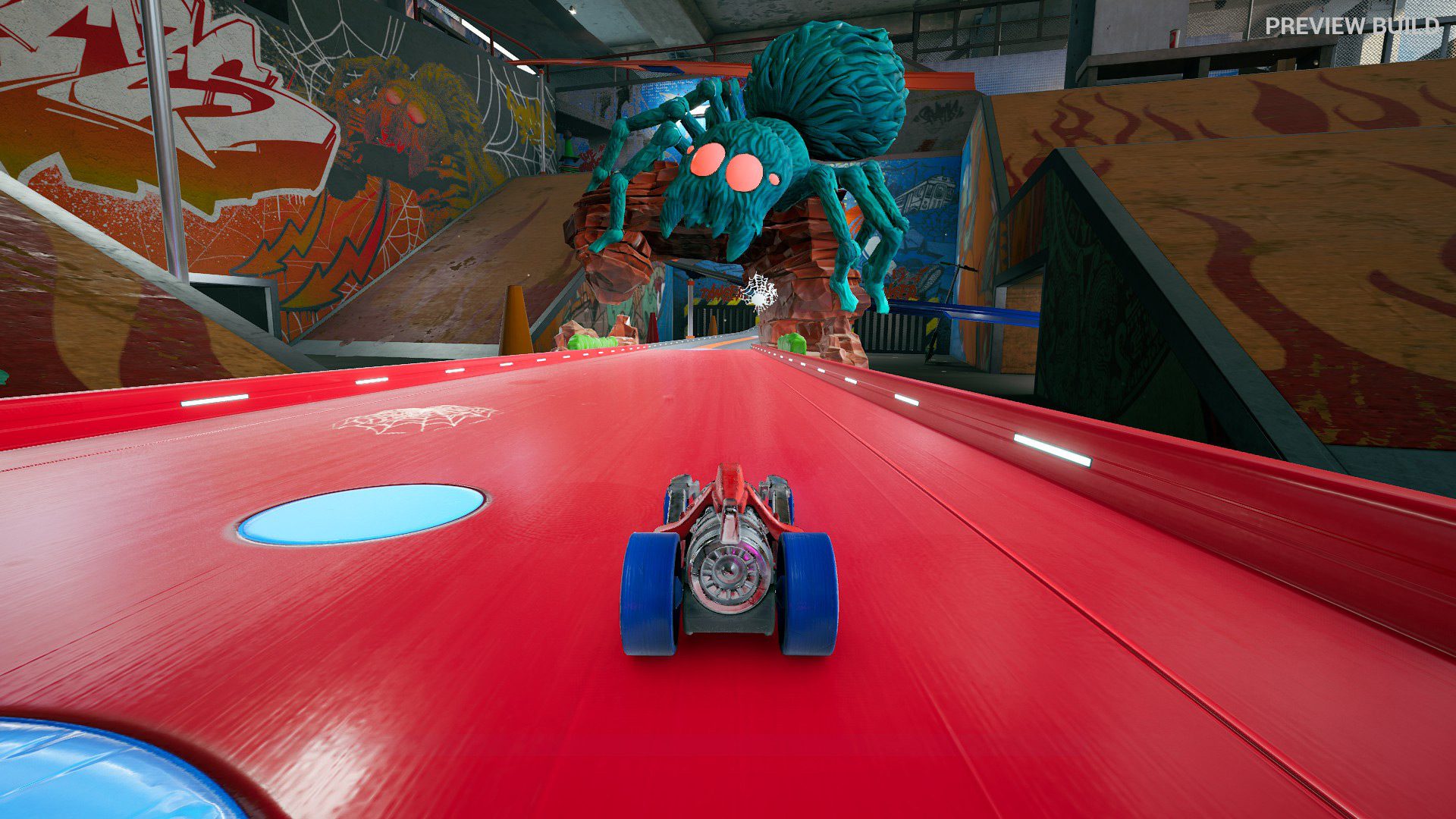 Hands-on with the boost-heavy arcade racer

There’s a simple pleasure to arcade racing games, and I’ve had my eye on Hot Wheels Unleashed as someone who owned a mess of orange plastic tracks as a kid. Even if I don’t have a current connection to the individual cars — I could rattle off few if any names from memory — I still appreciate their outlandish designs. Who wouldn’t want a shark car?

After going hands-on with a preview build of the PC version, I’m feeling good about Hot Wheels Unleashed, at least as far as the winding tracks and zippy driving are concerned.

It’s too early to tell how the pace of unlocks and stat upgrades will go (there will be an in-game currency, but no microtransactions), and I would’ve liked to dip into that side of the game. For today though, I had access to a couple dozen cars — like Dragon Blaster and Sharkruiser — and nine tracks spread across four “environments,” including a skate park. 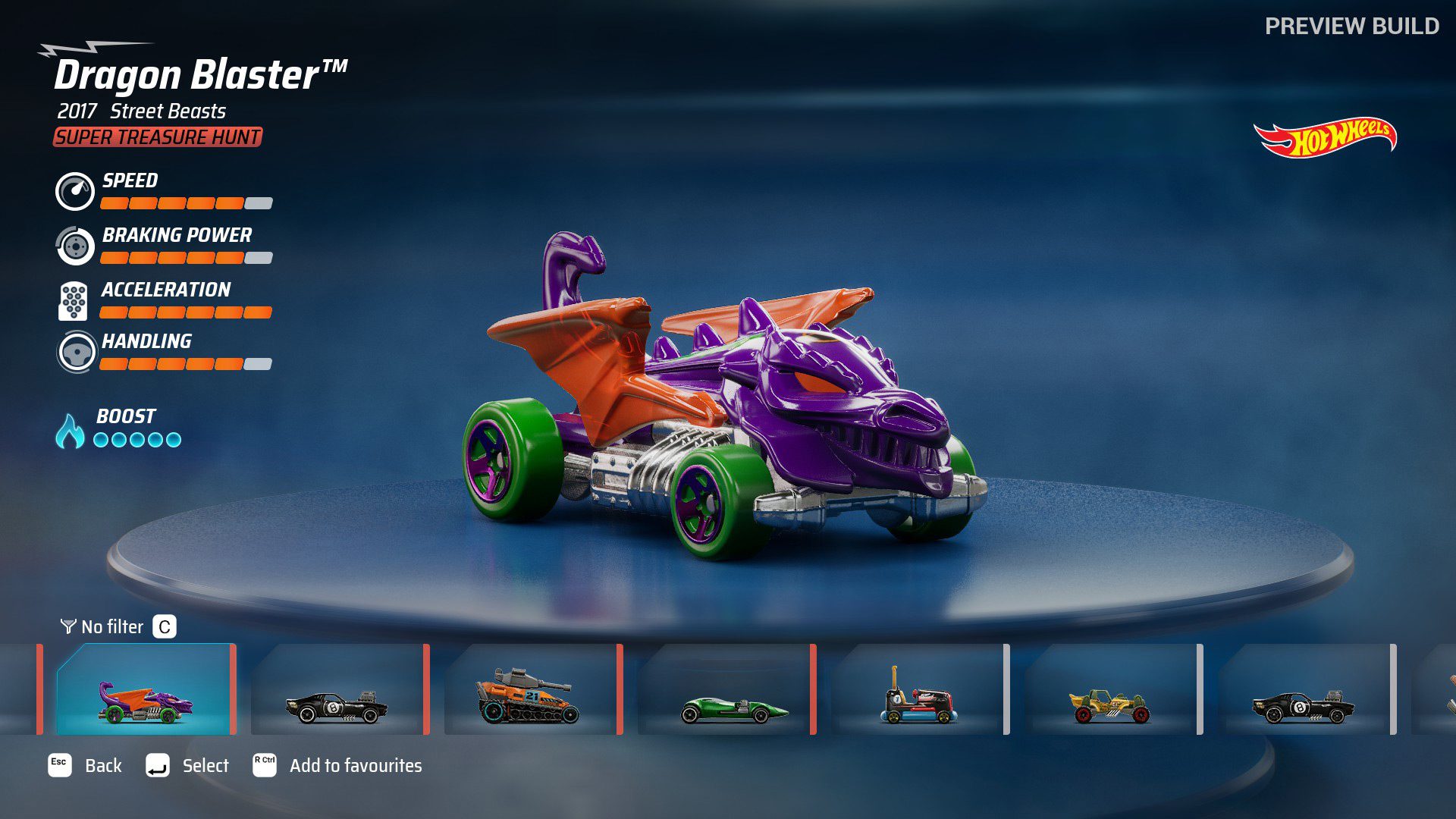 The sheen on the cars is appropriately toy-like.

The Steam achievements reference blind boxes, which might scare off some players, but for me, it comes down to how much of a grind it’ll be to get quote-unquote good cars. The variability comes down to Speed, Braking Power, Acceleration, and Handling. Boost is another big one — some cars have a traditional boost meter (that can be spent whenever), while other vehicles have boost nodes that need to be fully accumulated before they’re used. I much prefer the latter type; they feel great in conjunction with drifts.

Although I only had access to Quick Race and the cars were pre-unlocked, so I couldn’t spend my coins on anything, I understand there’s a car-dismantling system used to gain gears in exchange for dupes, and it’s possible to raise your favorite cars to higher rarity tiers. There are also Super Treasure Hunt variants that are “discovered in a different way.” 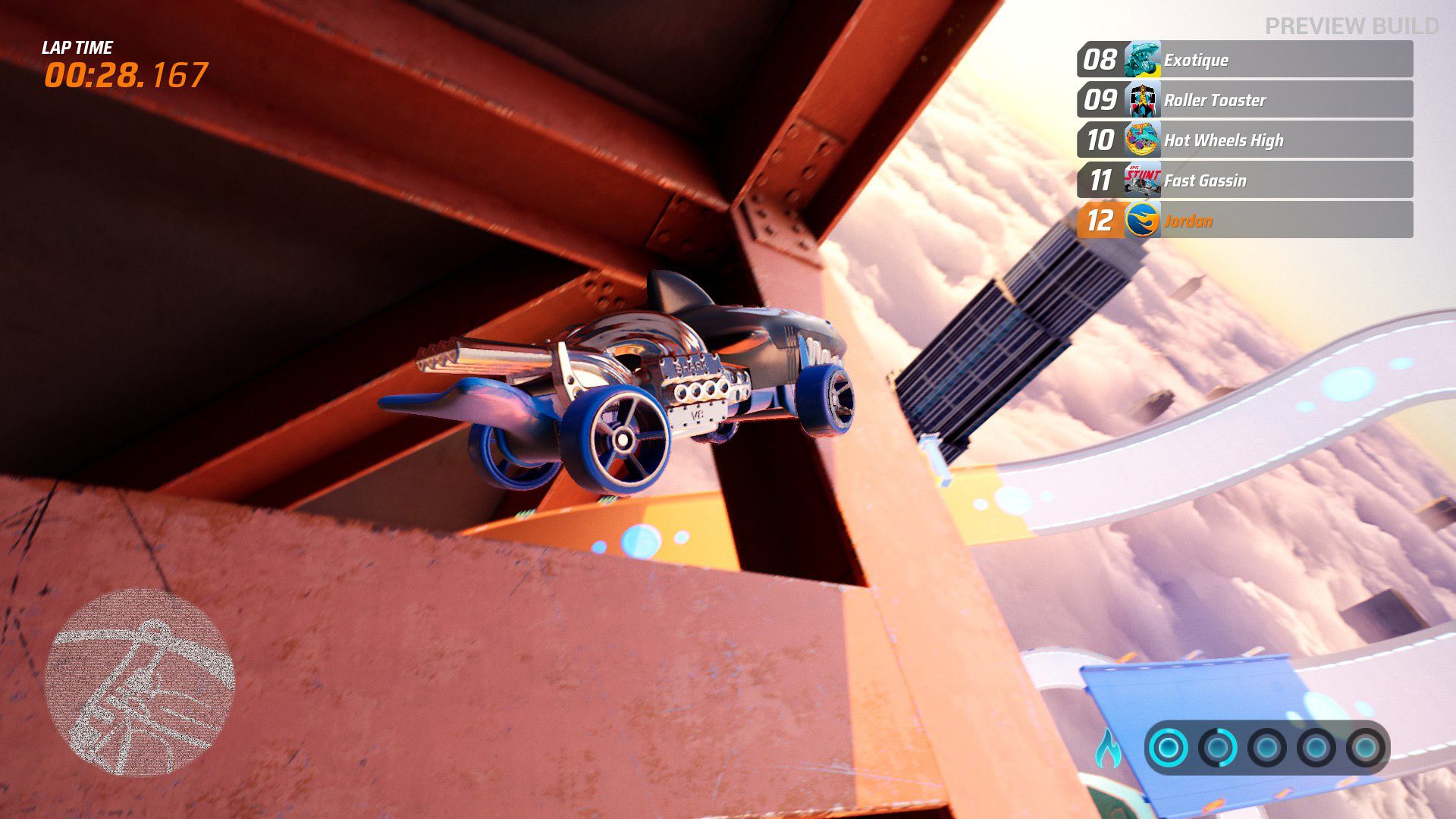 It was worth botching the race to get this screenshot.

The actual racing is about as uncomplicated as you’d expect given this style, which I dig. It’s fast and punchy, and the toy cars in Hot Wheels Unleashed can go flying off-track if you hit a ramp at a funny angle or get blown off by fan obstacles. (There’s slight mid-air turning to get yourself lined up before landing, but it can’t work miracles.) You’ll also sometimes need to dodge breakable barricades or a web-launching spider trap.

If you go out of bounds or otherwise need to reset, you can hold the respawn button for a second and you’ll be placed back at a checkpoint — albeit without your saved-up boost. Otherwise, your main priority is going to be avoiding getting stuck behind the grouped-up pack and veering as needed to drive over speed pads. Every little mistake adds up.

I primarily played on Medium difficulty, and I won about as often as I lost. The one Easy run-through I tried was a laid-back bloodbath; it’s kid-friendly. There’s also a Hard AI setting, but I wasn’t ready to take that on even with the high-stat vehicles as a crutch.

The handling varies quite a bit from car to car, particularly with all the sharp turns you’ll go up against, and some cars are dangerously lightweight in the air. The drifting is a bit weightier than I would’ve expected. It’s still an arcade racer — and the cars still largely feel like toys — but it took me a while to adjust. That said, I love the way the boost rockets you forward and the fact that you’re able to constantly refuel it and use it. I started relying on boosts to sort of course-correct myself mid-drift, and the end result felt really fun. 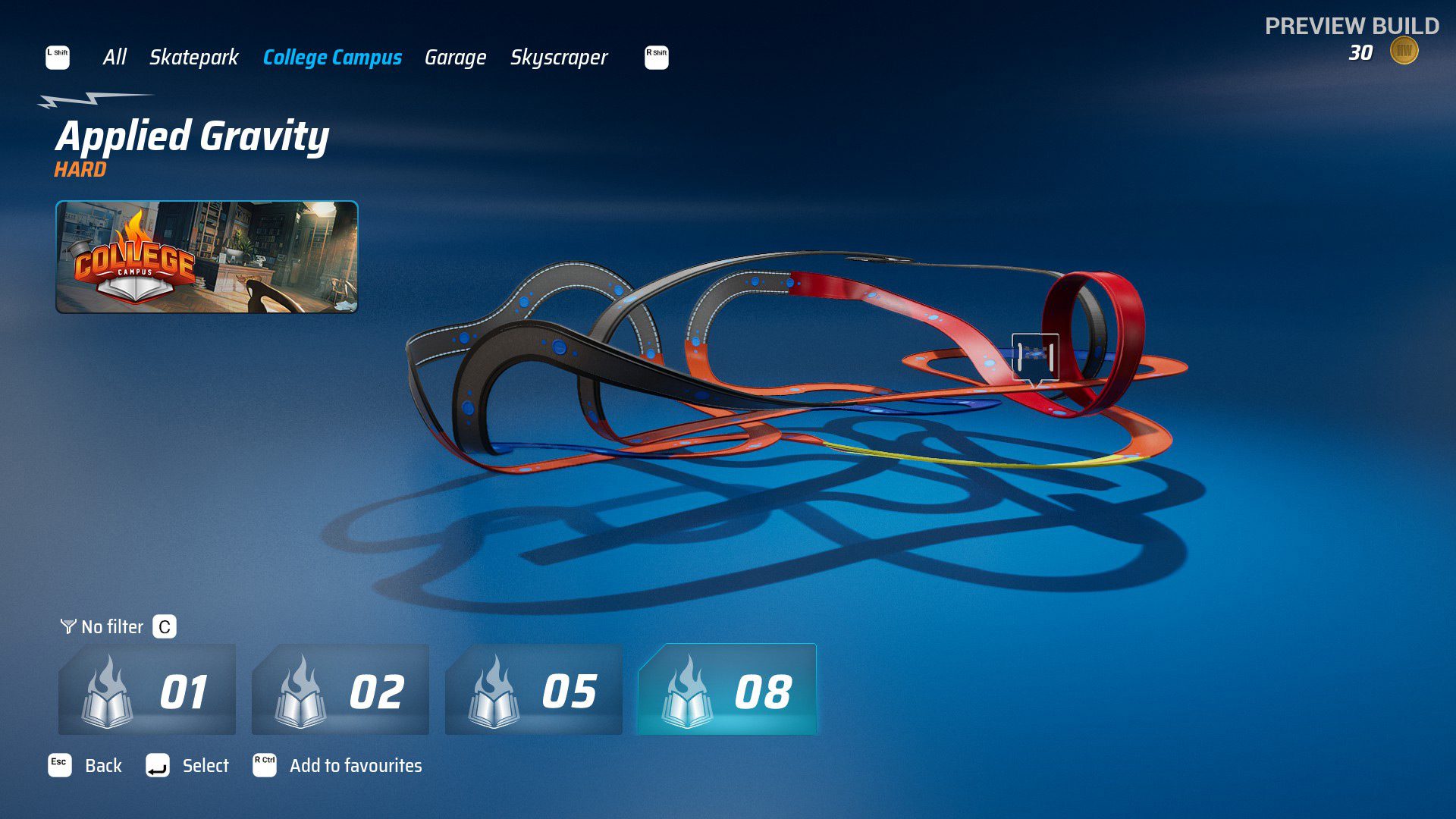 Note: the full game will have 40+ tracks set in six environments, two of which are unknown.

It’s worth stressing that the full game will have a Hot Wheels City Rumble career mode, a Track and Livery editor, and a customizable home base area. In terms of multiplayer, we’re looking at a two-player split-screen mode and up to 12-player online bouts.

I’m curious how wild people will be able to get with the Track editor, as there’s potential to make some crazy levels if creators can go all-out with tracks that let you ditch the plastic roads. Some of the official levels have portions that extend out onto the “real-world” surfaces, like a shortcut through a vent, but they’re usually short stretches.

I like what I’ve played so far, basically. If there’s a supportive track-building community and the progression hooks are motivating without being a total slog, I could see Hot Wheels Unleashed really taking off. Definitely keep tabs if you’re in the arcade mood.