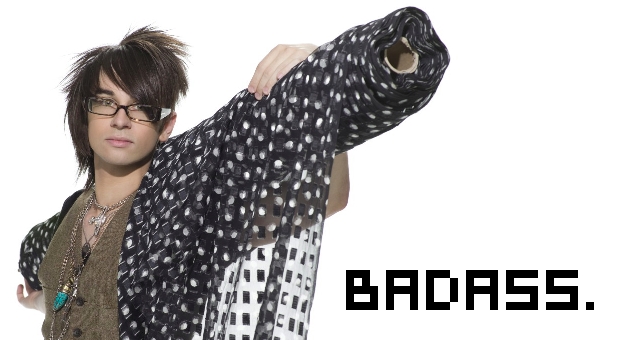 Ah, I bet you thought I was going to use “Make it work!” in the headline to describe the recent news that Atari is bringing a Project Runway game to the Wii. The popular phrase is the most well-known thing to come out of the hit Bravo Lifetime reality show for people that have never seen it.

But I have not only seen Project Runway, I watch it every week on a regular basis and know all the ins and “auf”s of the show. So, instead of “Make it work!” I decided to channel Season 4 winner Christian Siriano and drop a “Hot mess!” for all you fans out there.

Aaaaand … now I am realizing I should not be proud of any of this and am super embarrassed I told you.

So, uh, yeah. Atari is bringing a Project Runway game to the Wii. It comes out next year. And you can use the Wii Balance Board to strut down the runway and show off your newly designed fashions to the virtual judges. I will probably be buying it. Thoughts?

NEW YORK, NY (October 9, 2009) – Atari Inc., one of the world’s most recognized brands, and The Weinstein Company, announced today that it has entered into an exclusive licensing agreement with The Weinstein Company to develop and publish a series of video game titles based on the pop culture sensation Project Runway.  The initial game in the Project Runway line will be developed by Tornado Studios and is expected to be released for Wii™ in Spring 2010. The announcement was made by Jim Wilson, CEO and President, Atari Inc and Harvey Weinstein, Co- Chairman of The Weinstein Company.

The Project Runway video game will put players in the role of an aspiring fashion designer.  Similar to the show, players will be presented with different challenges as they create designs and adorn models with hair, make-up, and accessories.  Players can then become the model and strut their creations down the runway using the Wii Balance Board™ accessory. Capturing the true essence of Project Runway, the title will feature the show’s talent.

“The opportunity for Project Runway, the quintessential fashion brand and a pop culture phenomenon, is huge in the video game segment,” said Wilson, “Consumers will have the opportunity to not only exercise their creativity as an up and coming fashion designer, but also enjoy the fun of walking the runway on the Wii balance board.

Harvey Weinstein added, “We are thrilled to be in business with Atari as the Project Runway brand continues to expand allowing fans to actively participate in the program they love by using this new medium as a tool to explore their creativity.”

Unique features of the Project Runway video game will include: an interactive garment studio, a fashion career mode, hair and make-up studios, a Wii Balance Board-compatible catwalk game and a feature where the player can take part in high-profile fashion shoots and take on the role of a fashion photographer.  All fun and family friendly game features are based on the content from the show.

The Atari-The Weinstein Company Project Runway video game deal comes on the heels of record-breaking ratings for the new season of the critically acclaimed, Emmy nominated hit series.  At its new home on Lifetime, the much anticipated season premiere scored a phenomenal 3.3 rating in households, up 34% from last season’s debut.  With an average of 4.2 million total viewers, Project Runway was the highest-rated premiere ever for both the show and a Lifetime series. It was also the highest-rated premiere for a cable competition reality series this year.

Atari Inc. has also recently released the critically acclaimed Ghostbusters: The Video Game which has sold over one million copies.  The company is also releasing Star Trek Online in 2010.

About The Weinstein Company

The Weinstein Company (TWC) was created by Bob and Harvey Weinstein, the brothers who founded Miramax Films Corporation in 1979. TWC is a multi-media company that officially launched on October 1, 2005. Dimension Films, the genre label that was founded in 1993 by Bob Weinstein, is also included under the TWC banner.

During the Weinsteins’ tenure at Miramax Films the company released some of the most critically acclaimed and commercially successful independent feature films which received 249 Academy Award® nominations and won 60 Oscars®, have generated billions of dollars in worldwide box office receipts and billions more in home video sales. In its history, Dimension Films has released some of the most successful franchises including “Scream,” “Spy Kids” and “Scary Movie.

Upcoming films to be released in 2009 by The Weinstein Company and Dimension Films include: Tom Ford’s directorial debut “A Single Man” starring Colin Firth and Julianne Moore; and John Hillcoat’s “The Road” starring Viggo Mortensen and Charlize Theron.

Tornado Studios is an independent developer of AAA video games focused on creating cutting edge interactive family based entertainment products. Founded in 2008 by Tom Kudirka, Tornado Studios was spun off from 2015, Inc., creator of the award winning Medal of Honor: Allied Assault. The Company is comprised of industry veterans from such companies as Electronic Arts, Ubisoft and id Software and was formed to develop high quality videogames for the mass market consumer.  Tornado Studios is currently developing a videogame for Project Runway, one of the world’s top fashion licenses.

Wii and Nintendo DS are trademarks of Nintendo. (C) 2006 Nintendo.