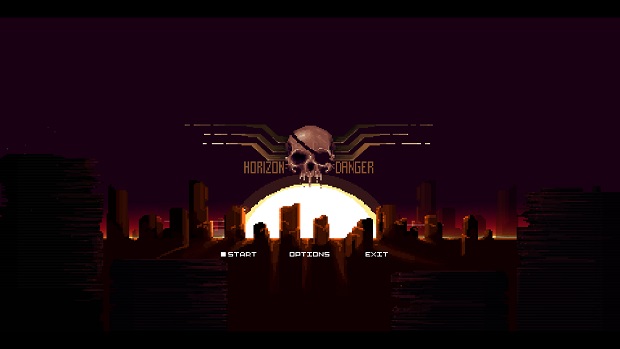 Think Smash but with more Skynet

Horizon Danger is described by its lone creator, SCaffa, as a “2 to 4 person local-multiplayer action game set in a cyberpunk dystopian future.” Without a doubt, this is the kind of local PvP multiplayer game that I would be interested in playing.

The title draws influence from ’80s and ’90s sci-fi films such as Terminator 2 and RoboCop as well as musical inspiration from retro synth artists like Perturbator and Nightcrawler. SCaffa artfully blends all of these ideas together with a gorgeous pixel art presentation I find irresistible.

Originally planned for a release sometime in 2014, Horizon Danger is now tentatively scheduled for a full release around March of next year. The developer mentions that it’s possible the game could release before then on Early Access, but that will depend entirely on its ranking in the videogame purgatory known as Steam Greenlight.

I think SCaffa’s really got something going on here with Horizon Danger. Even with around six months of projected development left to go, I’m really liking what I’m seeing so far. While the gameplay is still a work in progress, the developer has convinced me through his selection of fittingly brooding music and the eye-catching pixel art style that this is one to keep an eye on.

If you think Horizon Danger is the kind of game that you’d like to see on Steam, head on over to its Greenlight page and give it a vote.