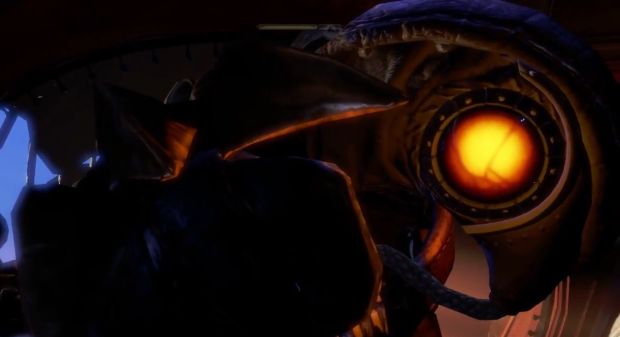 Gametrailers has posted the Spike TV interview with Ken Levine and the entire E3 demo of BioShock Infinite, and hot damn is it looking fine.

Honestly, I wasn’t sure if I wanted to watch it because I’d rather know as little as possible before I can go play it. There isn’t a lot of spoiler material in the footage to speak of though, and if anything it will probably make you want the game even more than before.

You can see a variety of the game’s new mechanics in action, wonder about the eventual load times for such massively open-air levels with this amount of verticality, and maybe even feel your skin react to the demo’s final moments.

Ken Levine has been tweeting about how he supposedly has a giant head, which really looked pretty normal to me when he was on stage at E3. He does look ready to swallow Geoff Keighley’s head in one bite though, which would ruin the tiny man’s perfectly ironed shirt. Maybe Gametrailers should start selling Geoff Keighley Shrunken Heads? Hang them on your rear-view mirror!