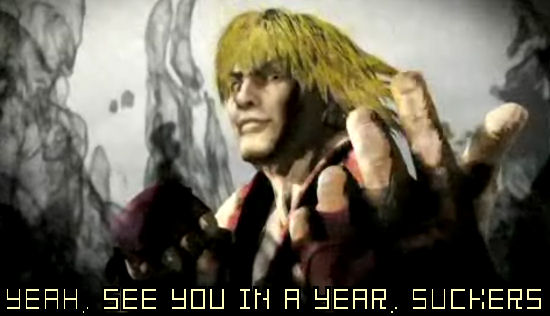 I had to laugh when I saw the announcement of Street Fighter IV, thinking that this ‘fourth’ game was more like the millionth (without hyperbole). I do admit it’s refreshing to see a Street Fighter title not followed by a chain of randomly strung together words, but then we won’t see anything else for over a year, according to Capcom.

After showing the trailer at Capcom’s Gamer’s Day in London, the House of Ryu’s European head of communications Ben LeRougetel dropped the bombshell that development is still too early for any concrete details, and eager quarter-turners won’t get their nimble fingers on Street Fighter IV for over a year. PSYCHO CRUSHER’D!

LeRougetel also added that Capcom has yet to decide which formats Street Fighter IV would be coming to, although I think we’d be idiots not to assume it would see a release on both the Xbox 360 and PlayStation 3 consoles.

Wherever it ends up, it seems that the ‘prepare yourself’ tagline for this new sequel is quite apt — we have a long, long time to be doing that. Now go practice your Yoga Fire, you wacky fighter fans, you.