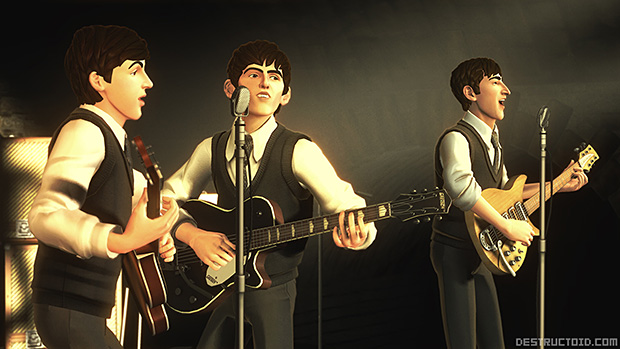 While at MTV yesterday to see a near-final build of The Beatles: Rock Band, I asked Harmonix PR guru John Drake to elaborate on something I’d heard from community manager Sean Baptiste during E3. According to Baptiste, the final movie for the game’s story mode is just as mind-blowing as the opening cinematic that premiered at E3. He went as far as to say, “If you don’t cry when you see it, you don’t have a soul,” calling the entire experience of The Beatles: Rock Band “the Brian’s Song of videogames.”

Drake agreed with that sentiment (“It is the Brian’s Song of videogames! That’s well said!”), noting that the end sequence was put together by Passion Pictures, the same production house that created the intro movie. He wouldn’t show it to me, but to be honest, I didn’t ask, and I would’ve declined if he had offered; I’d like to see it for the first time in-game. Instead, he told me that the movie “riffs off the beginning and takes it to a different level, and just is … the best way to end a game I’ve ever seen.” Boy, they sure know how to hype their stuff, don’t they?

After seeing the opening cinematic, though, as well as the first two chapters of the story mode (which I can’t talk about yet), I’m willing to take the bait. Drake spoke of his personal experience with the game, saying, “It is pretty much the most weirdly emotional thing I’ve ever played. It really makes me upset when I play it, because I’m like, ‘I don’t want to be moved by … animated Paul McCartney.’ ”

I wouldn’t be at all surprised to hear that people who play The Beatles: Rock Band — especially the baby boomers who grew up during the height of Beatlemania — were brought to tears by some of the content in the game. The Beatles: Rock Band is truly something you’ll have to see for yourself on 09.09.09, though for now, you can read up on its Vocal Trainer mode and find out what 25 of its 45 songs are.