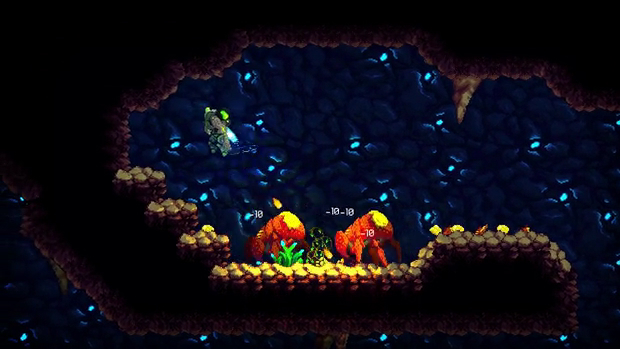 I won’t be shunning this

We have seen a lot of metroidvanias come out of Kickstarter in recent years, and a handful of more Mega Man-like games, but games like Contra have not gotten a lot of love from the crowdfunding platform. Hive Jump looks like it takes some of that classic never-stop-shooting gameplay and adds in some more recent gameplay elements like procedurally generated levels.

Hive Jump has already gone through the Greenlight process to release on Steam, and it is also planned for Wii U. The team is seeking additional funding on Kickstarter to help finish building it by its scheduled launch of August 2015.

For those who follow the game music scene, Jimmy “Big Giant Circles” Hinson will be doing the music for Hive Jump. That is always enough for me to keep my eyes (or ears) on a project, but the 16-bit pixel art and fast action gameplay certainly help toward that end as well.