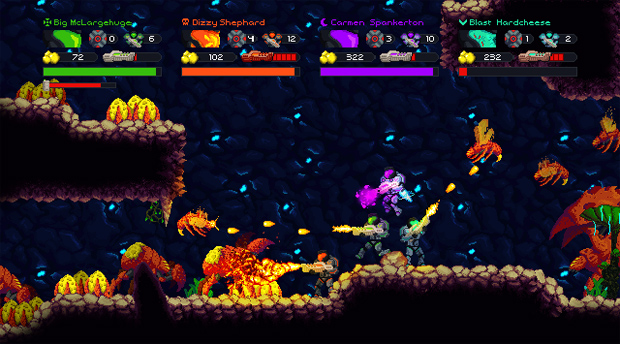 Graphite Lab’s Kickstarter campaign for Hive Jump has reached the halfway point and with that the team has offered up some new details on the title’s Planetary Strategy mode.

In the game’s turn-based strategic mode, players will fight across an entire planet infested with alien hives. It is here that you will decide what upgrades and weapons will guarantee your success and where to build up your defenses against the alien hive’s counter-attacks.

The two resources you’ll be managing during this phase of the game are Jumpers and Alien Goo: While initially limited, you will increase your number of available Jumpers automatically each turn as well as by freeing human captives. Alien Goo, an in-game currency, is collected by Jumpers on their hive-clearing missions as well as being harvested passively each turn. Described as bioelectric energy, the Goo can be used to requisition new weapons, research upgrades, build fortifications, and request more Jumper reinforcements.

Lead designer Matt Donetelli informs us that every successful or failed jump into an alien hive will have a measurable impact on your global war against the aliens. After each human turn ends, the aliens will then have a chance to fortify and launch their own counter-attack.

Alongside the run-and-gun aspects of the game, the strategic element looks to be a fairly robust component in and of itself, allowing players some control over the difficulty they experience in clearing hives. For more information about Hive Jump’s Planetary Strategy mode you can check out the game’s updated Kickstarter page here.