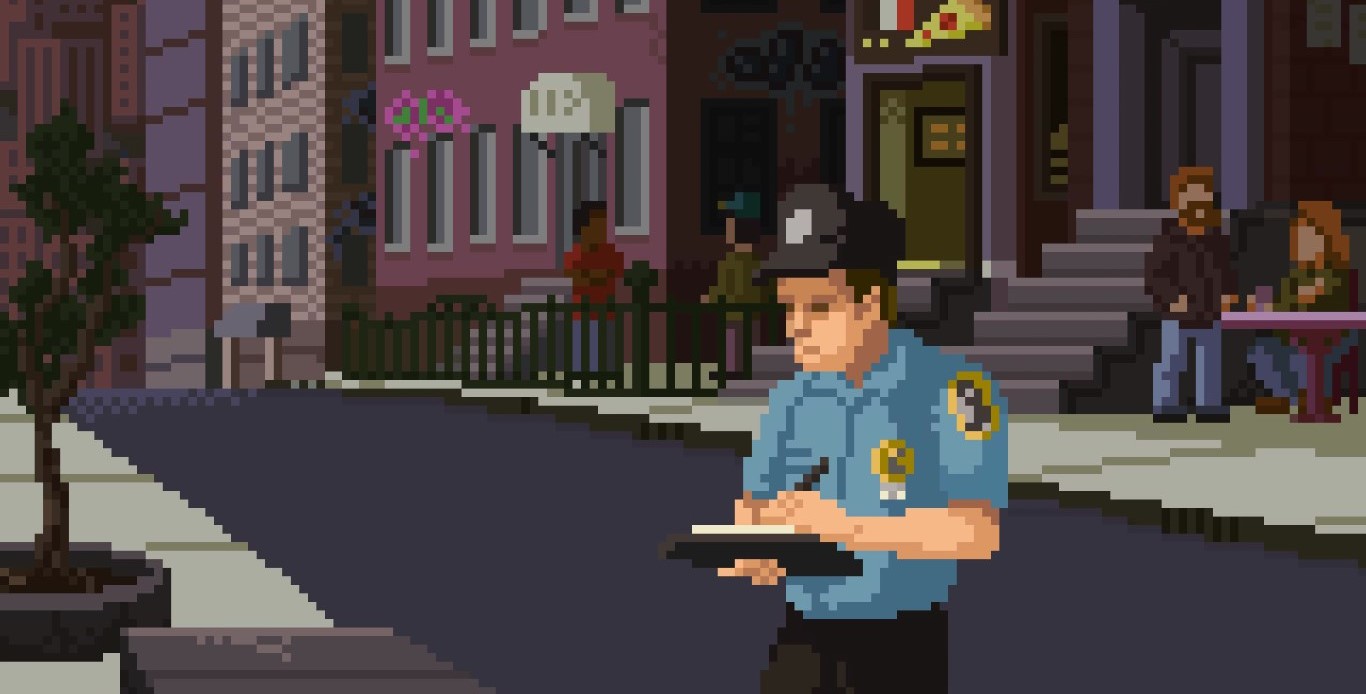 Not to be confused with Jetplane Landing’s awesome Backlash Cop

I used to work in a police station, two to be precise. Nothing special, just simple administrative stuff, but working for the law opened my eyes to one major revelation: police work is boring. Still, that hasn’t stopped me from loving any sort of crime fiction, especially when it comes to video games.

Playing a detective and solving a murder is pretty glamourous, and point fingers in a bizarre Japanese trial is always good for an adventure, but is it really possible to make an exciting game about the everyday struggles of a glorified meter maid? Well, Beat Cop tries to answer that in the most televised way possible. 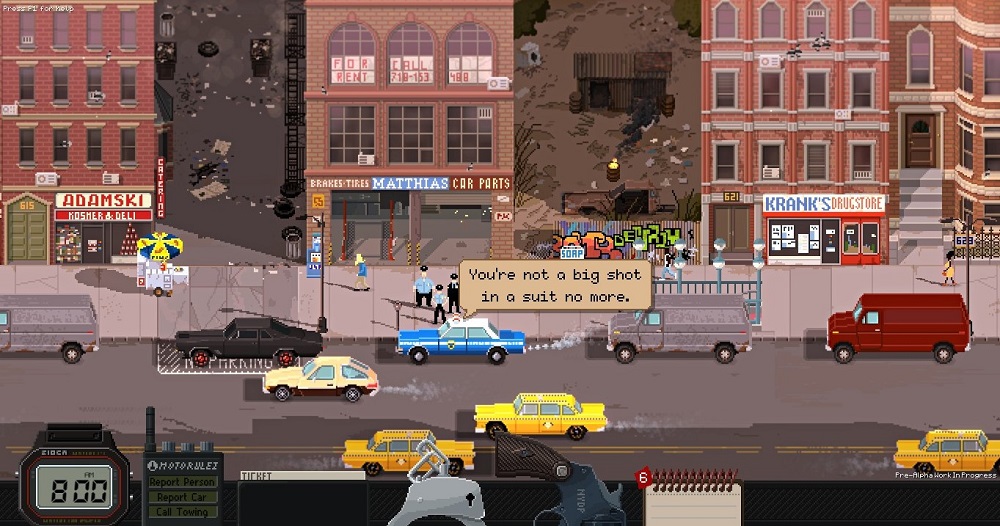 After being accused of a crime he didn’t commit, Officer Jack Kelly is busted down from high flying detective to lowly patrolman. He has just 21 days to get back into his department’s good books and clear his name; mostly by writing tickets on one of New York’s toughest streets, during a time when The Warriors was more of a documentary than a camp cult classic.

Beat Cop has an interesting premise, focusing on minor police work than puzzling murder mysteries, coupled with a busy pixelated look. It’s Police Quest by way of Party Hard. Even though a deadly conspiracy simmers in the background of a single downtown location, Kelly is usually stuck with making quotas and building people’s trust. It might sound incredibly mundane, but in a video game genre that relies on gimmicks for player interest, Beat Cop is refreshing for going in an unusual direction.

Each day starts with Kelly receiving his orders from the shift commander. It’s usually a ticket quota to fulfill, but as the days progress, they get far more specific. Writing a ticket isn’t hard, just time consuming as you freely check for any violations – plates, lights, tires, and parking – but you’re also constantly distracted by other crimes and requests. Dispatch might have you on the look out for shoplifters or a domestic disturbance, taking up vital ticketing time in the process. You can choose to ignore them, but failing to respond means losing face with the community and your superiors. 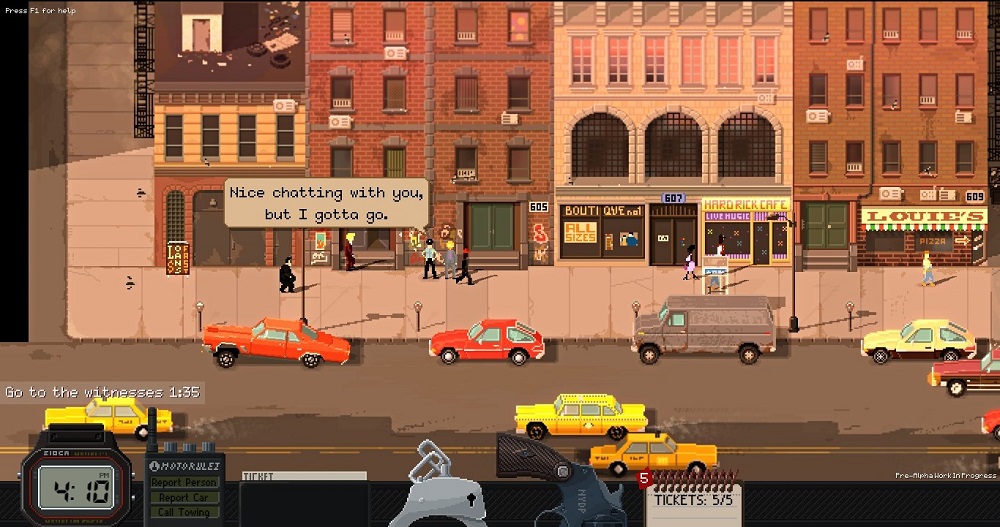 Beat Cop is a game about juggling responsibility; knowing when to prioritise and when to look the other way. Throughout a given day, Kelly can check in on a number of local businesses, which either lead to some playful exchanges or open up new requests. Some are straightforward, like running some dealers off your street corner, though many end up being morally deceptive. Throwing a suspect in a convenience store freezer might be quicker than writing a report, but even if you gain the owner’s respect, you’ll lose favour with the police. Things get even more complicated when you start running mafia errands in exchange for information on a recent murder.

Taking bribes and being honest is also a major aspect to Beat Cop’s gameplay. Writing a ticket often means confrontation, and you can choose to rip up a ticket if means making money on the side. Playing it straight wins more favours, but when certain debts need paying, the justification to “skim a little off the top” becomes all the more appealing.

So far, Beat Cop does a decent job of condensing a gritty microcosm into one street. The minute sprites and stressful traffic bring the pixelated world to life, while the various downtown stores remind you of New York’s most troubled era. Several of the smaller plotlines are intriguing, more so than the over TV show conspiracy, with one incident involving a pregnant girl’s disappearance unfolding over several days. 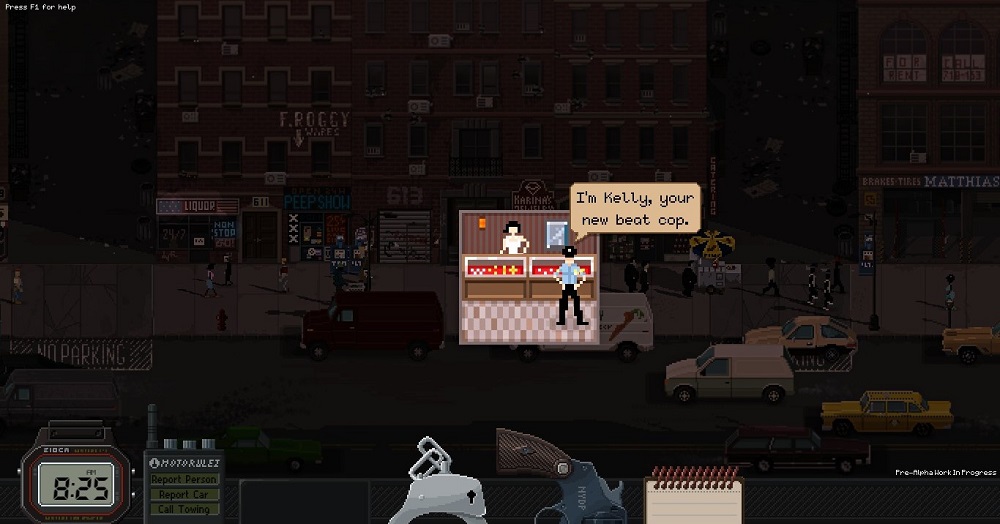 But even in a pre-Alpha state, Beat Cop does have its share of fundamental problems; the kind that’ll still be there on release. The preview build only allowed a playthrough of the first 7 days, but even early on, it was already noticable how repetitive and tonally deaf the game could be.

The days move along at a hectic speed, and while this plays well into your superior’s demands, they rarely allow requests and side-stories to breathe. You can find yourself inundated with new requests and absolutely no time to finish them. Though time stops during conversations, the race to each objective and dealing with terrible stamina in between is compulsive. Despite Kelly’s insistence on getting to know his neighbourhood, the quota always comes first. There’s rarely any incentive to stop by, unless dispatch calls for it.

The other major problem is that Beat Cop’s writing is tonally deaf at times. It drops F-bombs in an attempt to capture that 70s/80s nostalgia, but it ends up being more immature than evocative. At one point, someone drops the nuclear-C on you, which feels oddly out of place with its tongue-in-cheek humour; like when Larry David goes one ribbing too far in Curb Your Enthusiasm. As the hero, Kelly is somewhat dislikeable, ranging from sympathetic jerk to fascist pig, depending on how you play. 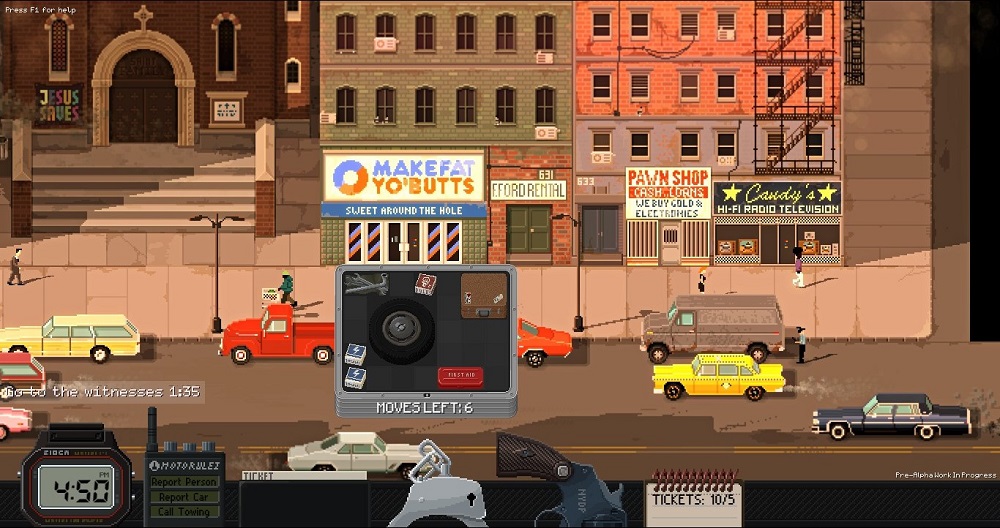 It’s understandable, though. For all its surface level nostalgia, Beat Cop delves into some relevant issues from around that time. Vietnam, tensions with Russia, and rampant sexism all get a look in; the later of which is particularly uncomfortable as it’s directed against a female officer, the only one in a frat house of useless cops. Still, everyone sounds like a dickhead for the sake of a smart-arse remark, which usually falls pretty flat.

Still, it’s very early days for Beat Cop, with plenty of time to tweaking gameplay and dialogue. Despite the roughness, I came away enjoying the overall premise and its nice to see this continuing emphasis on mundane policing, even if it’s heightened to a gaming extreme (see also: This Is The Police and Her Story). It’s also refreshing to see another crime game that deals with the more realistic aspects of police work, even if heightened to the usual gaming extreme. Hopefully, by the time of release, Beat Cop will grab a Khlav Kalash or two and admire the street level antics on display.