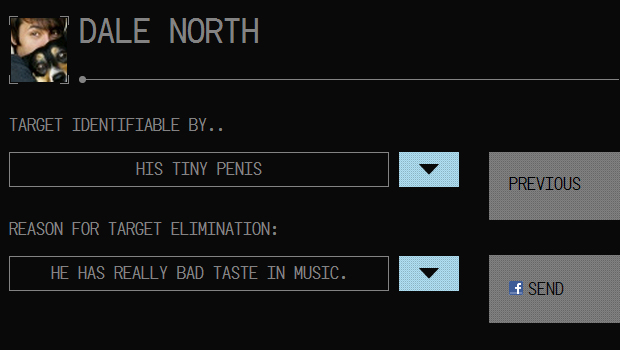 It seems controversy and Hitman: Absolution are destined are go hand-in-hand. Square Enix drew fire earlier this year for a trailer in which Agent 47 beat the crap out of fetishized nuns, and was criticized incredibly harshly upon release by UK reviewers (scroll down that link). Time for round three!

Not content to piss off half the gaming community with one awkward marketing stunt, Square Enix tried again with its “Hire Hitman” campaign — a site that let you send death threats via Facebook to your friends … or people who aren’t your friends, but you’d like to really screw with. The choice is yours!

Or rather, it was yours. Less than two hours after going online, the campaign was retracted.

Within moments of its launch, my Twitter feed was ablaze with folks calling it a “social bullying tool” and asking Square Enix what it could be thinking. Rock, Paper, Shotgun called the campaign out in no uncertain terms, focusing on the questionable pre-written “reasons” for having someone killed.

While the basic idea was stupid, the insults considered funny to hurl at people are what made it difficult to defend. Among other things, you could select to have a target identified by their “Small tits” or “Ginger hair.” A whole range of physical differences could be used to mock the receiver of the hit, and I’m struggling to see how anybody thought this wouldn’t land Squenix in the shit.

Reasons for elimination included being stuck in a job you hate, or even cheating on your partner. I bet the office Christmas party would go down a treat if you drop that latter bombshell on somebody! On that note, I should point out that I think Dale North has a great taste in music, and his penis is probably exquisite. I only used the above header as an example while the site was active and I hope Dale doesn’t fire me.

One could argue that, had this been a different game, the backlash may not have been quite so vicious. The fact Absolution was already in the firing line couldn’t have helped, and that makes the move all the more baffling. Then again, if you subscribe to the, “All publicity is good publicity” mantra, you’ll be keen to note that this title is in the public eye once again — quite a difficult thing to achieve for a game released in the packed Q4 period.

I don’t quite believe all publicity is always good, and the fact the campaign is down — presumably after the financially unhealthy Square Enix paid a considerable sum of money for its creation — can’t be considered a winning move for the publisher.

Anyway, that was the newest PR goof from a company that can’t get enough of them this year.