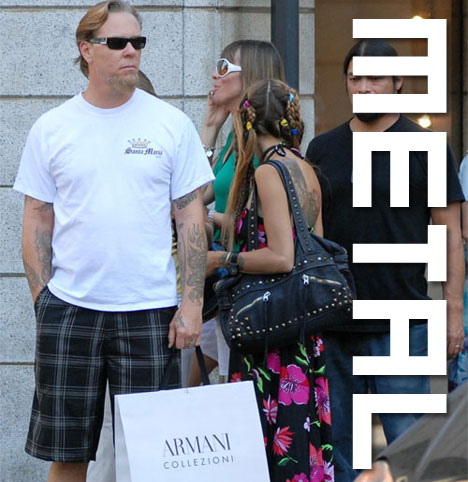 ScoreHero has the first details on Activision’s upcoming standalone title, Guitar Hero: Metallica, and are you sitting down? It features the music of Metallica. No s**t.

Lame sarcasm aside, the package is an obvious mix of content, with a few surprises. For one, the game will feature a new difficulty for drums called “Expert Plus,” which is being designed especially for people with a splitter and two kick pedals. Also on the drum tip, the game will offer up a new mode (or a “cheat” as ScoreHero calls it) in which you’ll be able to play freestyle drums using Metallica drum sounds (which can sound like anything from pots and pans to Civil War cannons, I suppose).

Like Guitar Hero: Aerosmith, the game will feature a lot of goodies for fans including DVD-style content like photos, set lists, fan videos, rare live performances, and behind-the-scenes footage. Fans of VH1’s “Pop Up Video” will want to check out “Metallifacts,” which lets you watch performance with overlaid trivia pop-ups.

As for the soundtrack, so far it’s looking like a dream for fans of metal. Metallica tracks like “For Whom the Bell Tolls,” “Master of Puppets,” and “Enter Sandman” have been confirmed. Also like GH: Aerosmith, music from artists who have inspired (or been inspired by) Metallica will be included, with tracks by Judas Priest, Samhain, Slayer, and … Queen.

Confirmed song listing after the jump.

Other confirmed artists include Foo Fighters, Queen, and Slayer.