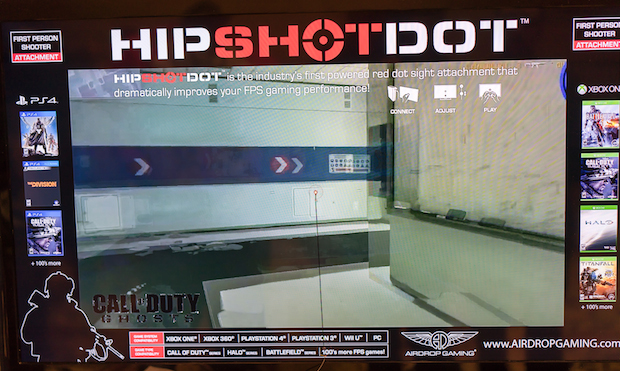 Never lose sight of your… sight

I thought something was wrong with a television I came across at CES tonight. There was a big red dot right in the center of a screen, like a really bright bad pixel. At second glance I noticed that a game of Call of Duty Ghosts had the dot lining up exactly with the game’s reticle. What are the chances of that?

If you’re using Airdrop Gaming’s HipShotDot, the chances are pretty good. This is a powered red dot sight attachment to be used with first-person shooters to improve performance and aim. Shoot from the hip if you’d like! Despite what happens on the screen, this red dot won’t be going anywhere. It’s bright, so it’s clearly visible at all times. It’s brilliant — literally.

This dot is USB powered, so it can plug into your console easily. A microthin lead is barely visible against the screen, and the clear suction cup around the dot LED is also almost invisible. A second attachment sits below the center one to have the lead running straight down. When watching gameplay, it was barely noticeable.

Airdrop Gaming’s site has the HipShotDot available now for $29.99.