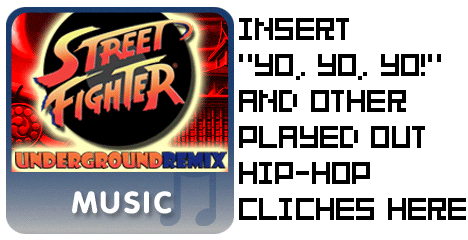 After less than a year of waiting that felt like seven, Super Street Fighter II Turbo HD Remix is finally coming to the PlayStation Network on November 25.

Capcom’s John Diamonon is over at the PlayStation.Blog pimping it out, and also dropping some pretty cool news on an exclusive for PlayStation 3 owners. It seems that Capcom got a bunch of hip-hop artists to create original tracks inspired by Street Fighter, and will be releasing it as an exclusive “Street Fighter Underground Remix” soundtrack on PSN. Artists include Redman, Hieroglyphics, DJ Qbert, DJ Toure, Zion I, Mistah F.A.B., and Oh No.

OK, I’ll speculate: I have it on good authority Street Fighter character skins for the PSN title Pain are on their way. Chun Li, Blanka, Ryu and Zangief will all be joining David Hasselhoff as digital rag dolls sometime in the near future.

That’s my guess. But what do I know? Things, that’s what. I know things.