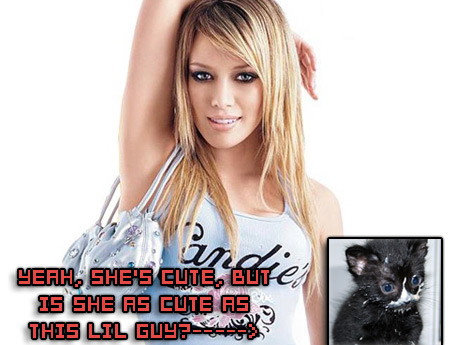 Nexon, the company behind Maple Story shot us a press release today announcing the involvement of Hilary Duff, a singer who is most well-known as “the one without crabs”, in their rhythm-MMO, Auditon.

Audition is a title in which gamers from across the world, who lack the coordination, impetus or multiple limbs necessary to head out to a club, imbibe a few tabs of E, and dance until they can’t see, can use the directional buttons on their PC keyboard to force their on-screen avatar to “serve” someone else’s avatar. Imagine a version of Dance Dance Revolution so annoying that birds fall from the sky, and nearby rivers turn to blood whenever anyone manages to complete a game. Of course, with the addition of With Love, Ms. Duff’s new single, Audition looks to catapult its utter inanity into a level unseen before, save by Gilbert Gottfried. If Kim Jong Il atomizes South Korea as a reaction to this title, don’t say I didn’t warn you.

Hit the jump for the full press release. Alternately, you could go out, and date someone. Y’know, your mother worries about you. She just doesn’t want to see you die alone, and spending all your time reading websites about virtual-teeny-bopper pop will only lead to crushing solitude, at best, and at worst, you’re already plotting to kidnap a fourteen year old girl.

Further strengthening the company’s online games portfolio for the North American market, Nexon’s Audition is a virtual community where players can chat with their friends and battle in intense dance-off competitions. Featuring songs from top artists and dynamic music composed exclusively for the game, Audition is free-to-play and subscription-free.

“One of the biggest ways I connect with my fans is online,” says Hilary Duff.  “And now with Audition, I have a cool new venue where I can share my music. Not to mention, I can’t wait to see all the crazy and original dance competitions featuring With Love.” Pop music sensation Hilary Duff is one of the first artists to announce her
involvement with Nexon’s Audition.  Duff¹s new single With Love, off her album Dignity, will be featured in both the game and the Audition TV commercial, now airing across a portfolio of MTVN television and online brands, including MTV, MTV2, mtvU, Comedy Central, VH1, Spike and Nickelodeon. Duff, who shot to fame with the television show Lizzie McGuire, already has three hit albums under her belt with Metamorphosis, Hilary Duff, and Most Wanted, having sold over 13 million records worldwide.

“Gamers are turning to the online world not just to battle enemies and
car-jack pedestrians, but to hang-out and interact with their peers,”says John H. Chi, president and chief executive officer of Nexon America. “Audition provides teens a trendy virtual scene where they can socialize with their friends and participate in dance-offs to their favorite songs. It also offers people another way to find and listen to new music.” Nexon America games are free-to-download at www.nexon.net and utilize an
innovative cash shop system (microtransactions), which offers players the option to use real currency to pay for game enhancements. In Audition, players can purchase in-game apparel and accessories, such as designer clothes, hip haircuts, and over 180 faces that come with their own numerous and unique expressions, that enable them to create one-of-a-kind identities. These features are purely optional, and players can try out items prior to purchase in virtual dressing rooms.

Nexon America is helping drive the MMOG market in North America to meet the social and entertainment demands of younger, more mainstream consumers. Nexon’s first MMO game, MapleStory, has already exceeded 3 million registered users in North America since its launch in 2006.  As the pioneer of the microtransaction, or Item Selling business model, Nexon has sold millions of virtual items worldwide through MapleStory and other hit titles such as KartRider and BnB: Crazy Arcade. In 2005, Nexon Corporation reported $230 million in revenue, driven primarily from millions of microtransactions.

About Nexon America
Nexon America Inc. is the North American publishing arm of Nexon Group, a pioneer of interactive entertainment software and the world’s leader in massively multiplayer online games. Based in Los Angeles, Nexon America was founded in 2005 to bring the best of online entertainment to the North American audience. The company¹s growing library of titles includes the world famous, smash-hit franchise, MapleStory, and the new motion-captured dance battle game, Audition. The foundation of all Nexon America titles is the Item Selling business model, in which users access the full game for free and can later opt to pay for game enhancements.

Thanks to Cute Overload for the picture and being the awesomest thing on these Intertubes.