I believe this is the first gaming setup that literally made me say “Holy shit” out loud. Bovine shows off his extremely impressive collection. He looks to have almost everything; hell, he even has duplicates of some systems and two TVs! I love the shelf he has where he stores his DS games along with his figures like the Castle Crasher guys. Plenty of more pictures to check out of Bovine’s collection up on his C-Blog.

Check out the highlights of the week after the jump. And remember to make a blog about your gaming setup! I’ll eventually get around to featuring what you got on here.

Before I begin with this recap, I want to apologize. Usually I try to have the order of this feature with the dates you all posted your blogs so it’s all chronological. I was about two-thirds of the way finished with the post when I did something retarded and lost it all. I hopefully managed to find all the blogs I wanted to highlight so everything wasn’t a complete loss.

Japanator’s lover of all things musical, Zac Bentz, needs your help! He’s going to be interviewing Freezepop soon and is asking the community if they have any questions he could ask Freezepop.

Rio McCarthy received a box full of win! She won Tomopop’s very first contest and the sexy folks at Tpop sent her the awesome looking Kid Robot Kid Ninja toy. Not only that, but she also got a couple of other toys plus a bunch of shirts including some Dtoid shirts.

Podtoid took a break this past week because of some super awesome secret awesome plan of awesomeness. Or something. So while we all wait for the next episode, Rev Anthony — well actually, .tiff — thought it would be a good idea to ask you all what subjects Podtoid should tackle next. Let them know of your ideas if you have any. 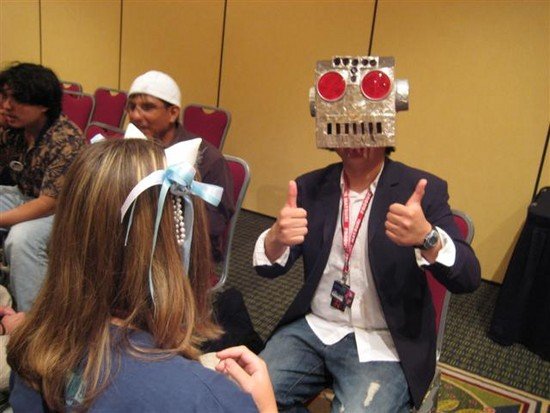 Say hello to Mr. Desutoid! Redzie created Desutoid and cosplayed as him at AnimeMatsuri. He got to hang out with a few of the writers from Japanator too. Redzie actually plans on making a better helmet for his next Con adventure. Try not to outdo ours, Redzie; we used air conditioner parts, for crying out loud!

pheonix-blood (yes, that’s how she spells it. Deal with it) just celebrated her one-year anniversary since joining Destructoid. She highlights some of the more memorable and controversial events that took place during her time with us.

Ali D wrote up a really great piece wondering if we’re all fanboys. So good, that we promoted it. It’s so funny seeing people defending a console as if it were their child.

kezins shared a very touching story on his C-Blog this past week. He was at the Virgina Tech campus on that horrible day the shootings occurred. One day when he was playing some Halo after the event transpired, he had a flashback to the VT Massacre and it made him stop playing videogames for a few months. It really makes me wonder if I would still be able to play an FPS if I ever experienced something like that. Thank you so much for sharing this with us, kezins.

Sure, I featured one of these videos from Justice’s C-Blog on Weekend D. today, but I thought it deserved another mention. Michael Jackson and SEGA worked together to make some music for Sonic 3. The plan fell apart, though, when the molestation charges surfaced. The music that was made was still used though as evidence by some of the video comparisons.

Teta drew some more Destructoid. This time he drew a cheeseburger with a side of Cheeburga.

GuitarAtomik is on Audio Surf Radio now. Two of his songs are available and more should be available soon.

Excremento is a good cook. He’s also good at putting babies in people. His baby is 12 weeks along and he shared some ultra sounds of the baby in his blog.

It was the best day ever for Dyson! Luzer7072 sent him a box containing a SEGA CD with several games for the system. Dyson’s retro penis increases +10 this week.

CutieHoney stumbled upon this paper craft of Mr. Destructoid that CubeCraft.com made. Sure, it was on Tomopop, but it didn’t hit Dtoid!

Lots of people have been getting a lot of awesome stuff this past week including Qais. He received a stuffed Quail, which made him super happy in the pants.

Skribble surprised us by showing off his artsy side. He drew a few things, including Mr. Destructoid. Get some more videogame pieces going, Skribble, and I’ll feature you on Art Attack Friday.

T-Rex, the world’s oldest badass. Before sharks, before tigers, before squids with zombie chicks that shoot lasers, there was the ultimate badass known as the T-Rex. Damn, aborto, you need to write more of this kind of stuff. I died laughing at this line:

The position of the eyesockets also shows that T-Rex had binocular vision similar to today’s raptors (hawks and eagles, not RaptorJesus). This means they had super eyesight, which would have made them excellent snipers if it weren’t for those tiny little arms.

Finally, Happy Birthday shouts out to Aertyr plus one, GAMEGOBLIN times three, Cheeburga times two, and Ceark times a billion.