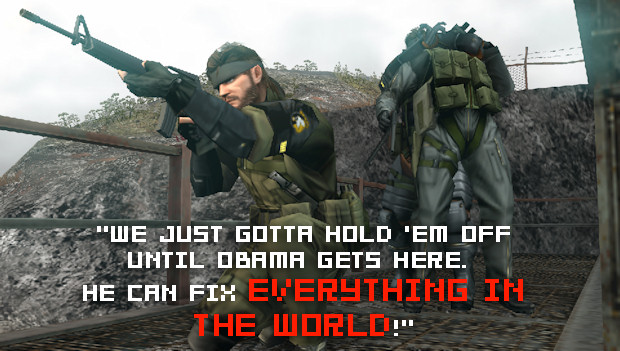 Yesterday, I was legitimately shocked by news that Barack Obama had won a Nobel Peace Prize for being trendy and simply saying he’ll do some things. Hideo Kojima isn’t quite as cynical as me, however, and thinks that President McJesus is bringing us one step closer to his vision of a nuke-free world. He also thinks this while situation is a great opportunity to plug Metal Gear Solid: Peace Walker.

“President Obama, who declared ‘A World Without Nuclear Weapons’ in Prague, has won the Nobel Peace Prize,” states the MGS game designer. “Has the era at last started shifting? The start of the Peace Walker plan? I hope that comes to be. Peace will not walk to you. You must both walk towards one another.”

Hate to break it to you, Hideo, but just saying that you’ll do something doesn’t mean that it’ll actually happen, and the chances of a world without nuclear weapons is are slim to nil. I’m afraid that Kojima’s world where nanomachines control everything and robot dinosaurs fire invisible missiles is about one hundred times more likely than Obama crafting this whimsical nuke-free world of love that everybody seems to think he’s capable of crafting like some sort of magic Santa.