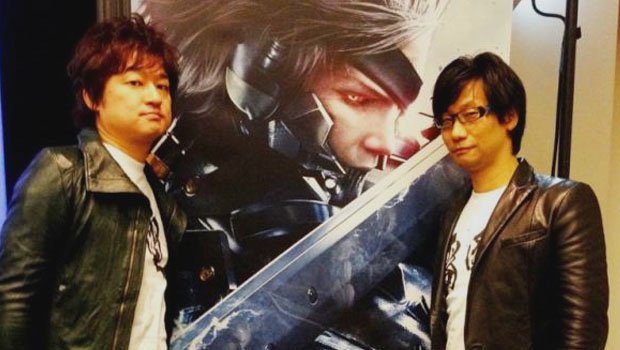 Yesterday, myself and a cavalcade of more talented writers than I had the pleasure of attending a press conference and panel style Q&A with Metal Gear creator Hideo Kojima and Platinum Games producer Atushi Inaba to discuss the recently re-revealed Metal Gear Rising: Revengeance.

It was pretty surreal being in the same room with two guys responsible for some of my favorite games ever, but somehow I made it out of there without Milhousing too much. Read on as the two gentlemen discuss the rise, fall, and Revengeance of Metal Gear Rising.

Q: Could you talk a little bit about what the game was like before the cancellation?

Hideo Kojima: I was working on Peace Walker, and I handed Rising off to the other staff. We had a different relationship from other working teams. I wasn’t aware of the content, really just working on Peace Walker. I probably should have stepped in to collaborate on the game design, but whenever I do that the young staff never develops. I didn’t want to do that. And I certainly didn’t want to do that for Metal Gear Rising.

In the summer of 2010, I realized the game design just wasn’t there yet. So, at the end of last year, I realized that at this pace, we wouldn’t have a game. The younger team wanted a Raiden that felt great to move around, but at the pace things were going, that would never happen. I decided to cancel the project. But we had all of these assets already created such as motion capture, some great story bits, etc, and I wanted to use that somehow. That’s when I decided to contact Platinum Games. They gladly accepted. At that point, we had a very solid game core, but we had to work according to the plan that was already established. We have a very tight deadline. We’re working like game companies did many years ago, very fast paced.

Atushi Inaba: I kept meeting Kojima-san at parties and always asked him “What’s happening with Rising?” Now that I think of it, maybe I shouldn’t have asked that question, because maybe that’s why we got the project. I mean, I’m having a lot of fun, but we have to work really fast on this game. Kojima Productions is really making us work very hard.

Now that you’ve handed a project to your younger team and they were unable to complete the game, do you foresee giving them big projects in the future? Do you see yourself becoming more hands-on with the projects at your studio?

HK: We have really good staff members and people working here [at Kojima Productions]. But the game’s designers, the leaders, were very hard to educate. We will probably work with outside designers. So far there have been many games that have had problems with execution. For many game designs, it is very hard to materialize the idea. For this occasion, it was not my game design. Usually, I’m much more involved in the project, but this time I was not. I stepped back and watched what they were doing

After the premiere of the trailer at the VGAs, there was almost a mixed reaction among the hardcore Metal Gear fans as to what they saw. Some people are very excited, but other fans say “We like what we saw in the original version, whereas this game looks like a Bayonetta instead of a Metal Gear!” To those fans, what do you want to say to them to tell them they should be excited for the new take on Rising?

HK: What people saw in the old trailer is the same game. Sure, the camera effects look very different, but it’s the same game with the same goals as the original version. The original goal was to have a game where you can slice everything, there’s speedy action. The game Platinum is making runs at 60 frames per second, whereas the old [Kojima Productions] version ran at 30 and had a stealth aspect to the game.

AI: We are making the game we have clear in our minds, and it’s not Bayonetta.

One of my favorite action games of the last few years is God Hand. Have you [Mr. Kojima] played God Hand, and were there any other Platinum or Clover games that influenced your choice to go with them for Rising?

HK: I haven’t played God Hand, but I saw the trailer and loved what I saw. But Okami had a huge impact on me. That game, I remember when I played it, the action felt so good. After some levels, I just had to stop playing because I was too jealous of what they made.

Mr. Inaba, Platinum Games thus far has only made original games. Was there any resistance to working with a franchise?

AI: When we started Platinum Games, we had nothing. The only thing we could do is work on our own original games. The thing about Platinum is that I’m the only producer on staff. So if I’m not excited about a game, we probably won’t ever work on it. So when Metal Gear Rising was offered to us, I was very excited about working on it.

You mentioned in the documentary [shown before the Q&A] that you were looking at Western developers for Rising. What made you go with Platinum Games?

HK: When you think of action games from Japan, you immediately think of Platinum. They are by far the best, so I had no doubts in my mind when I approached them.

Were there any specific Western studios you had your eye on?

HK: Well, I want to keep my friends around the world from all aspects of development. The katana is one of our main concepts for this game, which is something very difficult to explain. At that point, I thought I needed a Japanese company, and Platinum was that company. There are many great production teams from North America, but I thought that if I took the project to them, I would come back and there would be no katana. Instead there would be a gun with a chainsaw or something.

With your original team, you had a hands-off approach. Since the game is at Platinum, will you be checking up more often?

HK: Well, I have to be a bit more hands-on with the project since it was my idea. But I don’t want to be telling people what to do. I just want to put the money on the table and have Platinum make the game.

HK: No, it’s not a promotional thing. We create these fictional worlds, so we inserted things like the iPod into them to give the world a sense of believability.

How has Kojima Productions thought about where Rising fits into the Metal Gear universe?

AI: I don’t think the soul of something can be explained with words. I’ve talked about it with my staff, and I told them “If you don’t like Metal Gear already, I probably wouldn’t have been able to take the game on. Fortunately, Platinum is filled with people who love and deeply respect the series. The Metal Gear universe is so deeply detailed, we don’t want to change it.