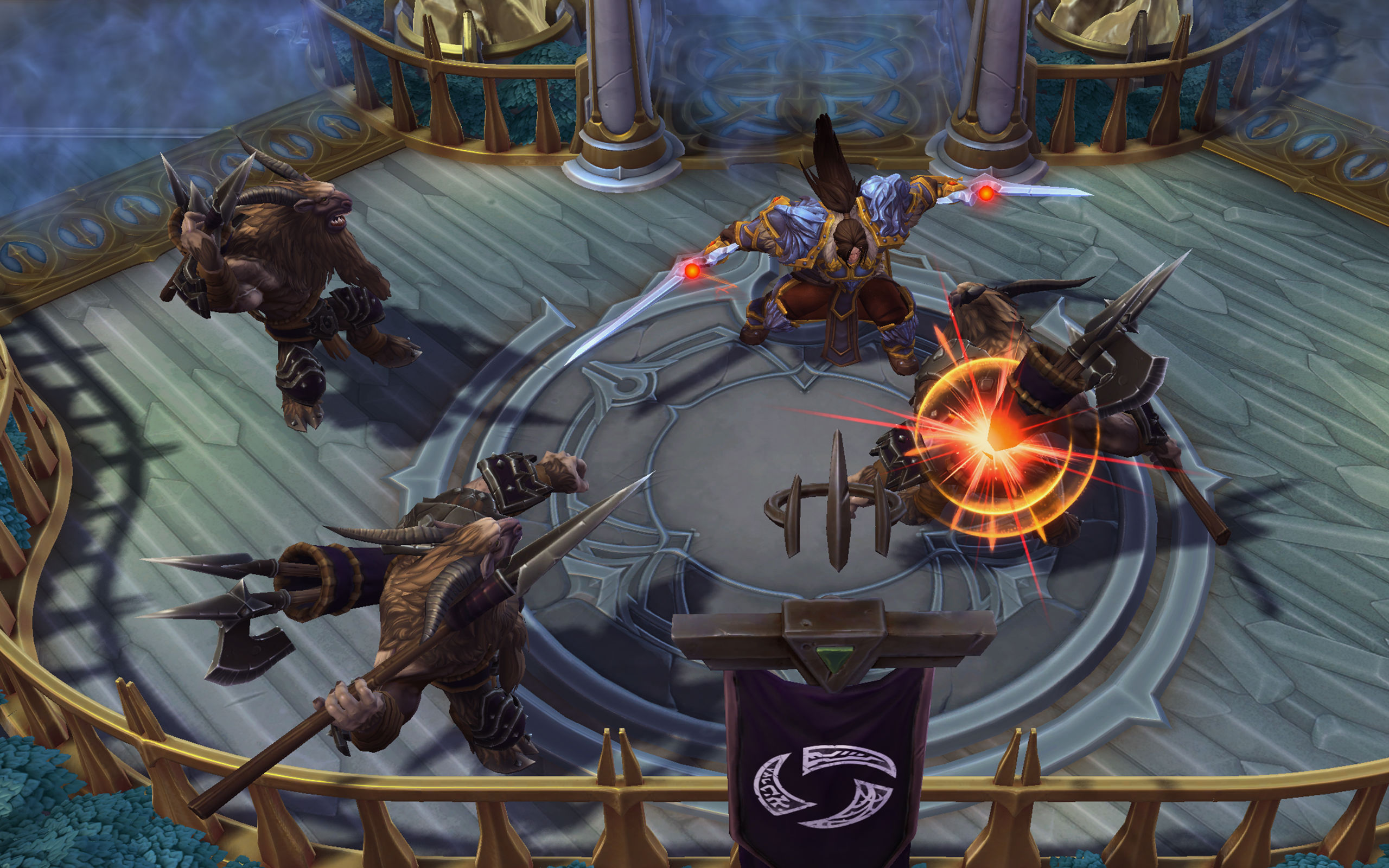 When Varian Wrynn, former King of Stormwind hits the Heroes of the Storm battlefield, he’ll bring a whole new concept into the game — the multi-class character.

Varian is a tank at heart, built with the principles of a World of Warcraft Warrior in mind, but he can also be altered into an assassin role. And this isn’t nominal either, as he’ll count for both Warrior and Assassin quests.

He might not be nearly as fun to play as Ragnaros, but he’ll fulfill a niche, and the game desperately needs more Warriors as it is.

The whole deal with Varian involves his level four and level 10 talents, which help nudge him towards more damage absorption or damage output. Very early into the match you’ll have the chance to upgrade either his parry or charge ability, but at level 10, you’ll either choose between more health and less damage, more damage and less health, or a healthy mix between the two. Much like how Dehaka grows his arm back at this juncture, Varian will alter his equipment accordingly, sporting a sword and shield, double sword, or giant sword based on your choice. It not only looks spiffy, but it serves as a cue for the enemy team on how to approach him in a fight.

His kit involves a line skillshot sword slash, the aforementioned parry (which mitigates physical damage for 0.75 seconds), and a charge, which can be talented to double as a stun. Varian’s passive Heroic Strike grants you bonus damage every 18 seconds untalented. If you go for the Taunt heroic ability (which forces an enemy hero to attack him for roughly a second), he’ll get a passive health increase by 50%, and an attack speed decrease of 25%. If you go for Colossus Smash (a single target attack that can be talented at 20 to hit multiple foes), he’ll get a 75% attack damage increase, and a 10% health decrease. Finally, “Twin Blades of Fury,” a third choice, increases attack speed by 100%, and reduces his base attack damage by 25%, granting him a shorter cooldown on Heroic Strike if you keep attacking heroes.

It doesn’t sound very sexy right? It’s not. Varian is a tried and true melee tank or damage dealer depending on the route you go, and he doesn’t have much in terms of maneuverability no matter what route you go with. But let’s be clear — he gets the job done and can be semi-tanky even with his assassin builds. I found that he’s very good at getting single target damage in, especially if you go full assassin and go for that stun. If you have Heroic Strike up you can melt assassins before you even pop your heroic. But at the same time, without a tank build or tank-centric talents, he can buckle really quickly if he’s focused by the enemy team, and is really limited when fighting multiple targets.

It’s tough to say how Varian will turn out when he hits the full version of Heroes of the Storm. When it comes to just about any Warrior, they’re generally underpowered at launch and require multiple post-release buffs to remain competitive. He might not be as extreme of a case if people prefer damage builds and create cookie-cutter talent choices to ensure that he creates as much chaos as possible, but I’m not entirely confident in his ability to fulfill any role better than a lot of existing characters.

So while I’ll be there day one to give him a shot, I doubt I’ll play him as much as say, Ragnaros, which completely shakes up pre-existing MOBA notions.