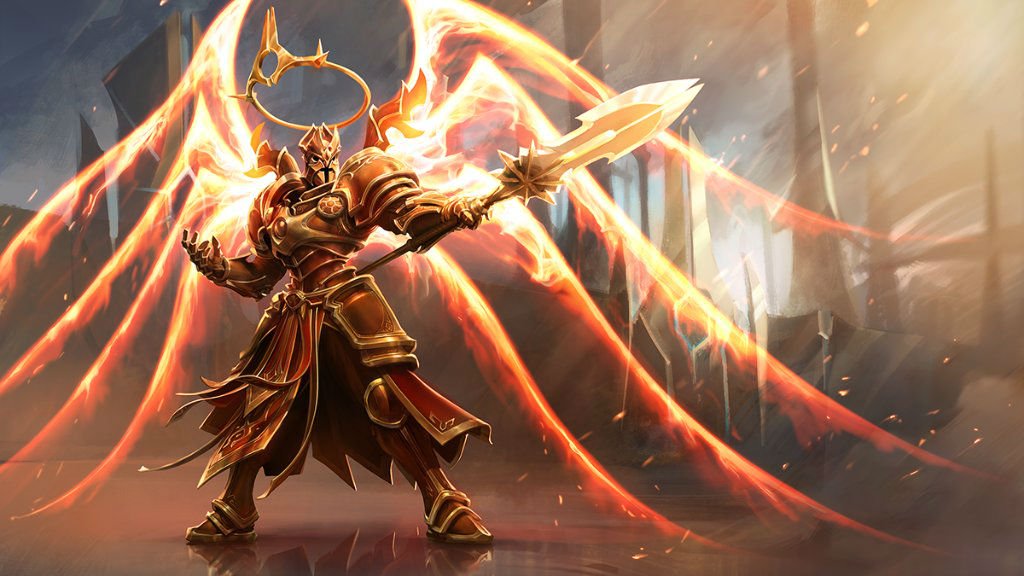 As I mentioned last week, Heroes of the Storm might be winding down when it comes to support from the top ranks of Blizzard (and Activision), but the team that’s left is still passionate and willing to support the game as long as possible. Part of that support (and by proxy, the efforts of the full team) is coming in the form of Imperius, a character that’s been requested by the community for ages.

As Tyrael’s boss, Imperius brings more Diablo representation into the fold, which is always a good thing. According to Blizzard he’s an “all-in bruiser who leads the charge with strong initiation and single target damage,” which seems to line up with his kit that you can peruse below.

The gist is that by attacking a single hero he can mark the enemy to dole out more damage (kind of like Malthael or Tyrande), with charging, wave clear and an active armor ability baked in. On paper he seems great for laning as he has some sustain with his molten armor and has the aforementioned waveclear with his W, which can be severely bolstered by his talents.

His heroics (ultimates) seem interesting as well, with the choice between a shield of swords that can be popped as an offensive ability if your shield lasts the full duration or a pop-up that knocks a hero “to the heavens.”

Imperius will be in the PTR (Public Test Realm) soon for testing before he goes live.

Lunge towards a targeted direction and stab, dealing 35 damage. If an enemy Hero is hit, Channel to Stun for 1 second and deal 70 additional damage when it fully finishes.

Release a fiery wave that deals 100 damage. Enemies hit by the center take 50 bonus damage and are Slowed by 40% for 3 seconds.

Shroud Imperius in flames for 3 seconds, striking a nearby enemy for 19 damage every 0.25 seconds. Imperius heals for 100% of the damage dealt, with healing doubled versus Heroes.

Summon a ring of blazing swords that grants 1000 Shield for 3 seconds.If the Shield lasts the full duration, this ability can be reactivated within 5 seconds to launch 6 swords toward an area, each dealing 140 damage to the first enemy hit.

Wrath of the Angiris (R)

After 0.75 seconds, charge in the target direction, lifting the first enemy Hero hit into the Heavens. While in the air, Imperius can steer the landing location by moving. After 2 seconds, slam the target into the ground, dealing 375 damage and Stunning them for 1 second.

Reward: After Stunning 2 Heroes, permanently reduce the cooldown by 2
seconds.

Reward: After Stunning 3 Heroes, permanently reduce the cooldown by an
additional 2 seconds.

Quest: Hitting Heroes with the center of Solarion’s Flare increases its center damage by 10, up to 150.

Hitting a Hero with Solarion’s Flare grants 60 Physical Armor against the next 2 enemy Hero Basic Attacks. Stores up to 4 Charges.

Activating Molten Armor removes Roots and Slows. If a disabling effect is
removed, heal for 250.

Heal for 82 Health for every Valorous Brand mark consumed.

Hitting a Hero marked by Solarion&#39;s Flare with Celestial Charge deals 160 damage around the target.

Solarion’s Flare leaves a line of scorched earth along its center, exploding after 2 seconds and dealing 125 damage.

Activate to cause the next 4 Basic Attacks to cleave for 157 damage.

Stunning enemy Heroes with Celestial Charge reduces their damage by 35%
for 4 seconds.

Striking an enemy Hero with Molten Armor reduces its cooldown by 0.25 seconds.

Molten Armor heals 25% more while Imperius is below 50% Health.

Consuming a Molten Armor mark reduces the target’s Armor by 25 for 4 seconds.

Nearby allied Heroes gain 600 Shield for 3 seconds.If the Shield lasts the full duration, Flare a sword at the nearest enemy Hero, dealing 140 damage.

Consuming a Valorous Brand reduces the cooldown of Wrath of the Angiris by 5 seconds.

Activate to become Unstoppable and gain 75 Spell Armor for 2 seconds. Hitting Heroes with the center of Solarion’s Flare reduces this cooldown by 5 seconds.

Activate to teleport to an enemy that has been marked by Valorous Brand.