Hotline Miami 2: Wrong Number picks up after the events of the original game and focuses on two different groups of people you’ll be playing as. While both groups are very different from one another, they both happen to be dealing with the same subject matter: Hero worship. The “hero” in this case being Jacket from the Hotline Miami, who has made waves after going on his killing spree against the Russian mob.

A new story, but that original brutal satisfying gameplay is very much intact. You’ll be smashing, slashing, shooting, and slamming people’s bodies into bloody pulps all to the cool tunes of the ’80s-inspired music once again, and that’s a good thing.

Hero worship comes in the form of the Hollywoodization of a person, where you attempt to tell someone’s story but end up glorifying it instead. Remember the first trailer for Hotline Miami, starring the Pig Butcher? You know that part where it says based on a true story? Well that’s true, sort of. It’s based on true events in the sense that that trailer was actually a movie trailer from within the game’s universe.

Part of Wrong Number’s storyline will see you playing as Pig Butcher, the star of a new movie based on the events that took place in Hotline Miami. The movie is a ’90s slasher take on those events, but the gameplay setup remains the same. You will go through the various stages, killing anyone that gets in your way. The difference here being that once the stage is over, the director yells cut and everyone is actually alive and well. At least, that’s how this opening act played out with Pig Butcher.

The director stresses for the actors to really absorb their characters, reminding me of how Daniel Day Lewis gets into his roles in real Hollywood movies. This is pure speculation on my part, but I wouldn’t be surprised if Pig Butcher starts killing for real as you progress through his story.

The second form of hero worship takes us to the extreme, where fans mimic the heinous actions. In this case you’ll be playing as a group of hardcore fans, wannabes that desire to become masked vigilantes just like Jacket was. Trouble is that the janitors from the first game have no reason to call anymore as Jacket killed the entire Russian mob already. So the fans just drive around town, looking for thugs to beat up. They hope to build up media attention this way, thus the janitors will place a call so they can be part of the thing they look up to so much.

In the second part of the demo we met up with these fans as they’re throwing a party where various people were wearing different animal masks celebrating Jacket. While some of these people were just hanging out, the main characters you’ll be playing as wanted to do more than just party. The leader of the gang wears the tiger mask, a mask that’s torn apart and all bloodied up as the leader claims it’s a mask belonging to Jacket that he found.

So the gang departs the party, and finds some thugs to beat up in similar fashion to the original game. Each of the playable characters wears a unique mask, thus each character has a special ability. With the tiger mask, you can’t use weapons as your punches are insta-kills. With the zebra mask, you’re agile and able to climb through windows to get around levels. 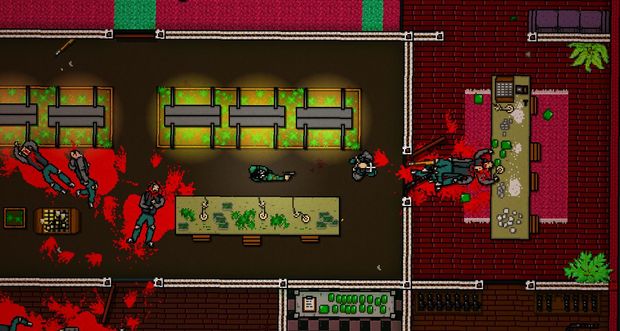 “We know there’s a lot of expectations from people of what the game should be or should not be,” Hotline Miami’s Dennis Wedin told Destructoid during a press demo. These obsessed fans like tiger mask “kind of symbolize people that want Hotline Miami 2 to be the same as Hotline Miami 1. You know, collecting masks, getting phone calls, etc. Yeah it’s going to be in there, but we don’t want to make the same game one more time.”

So these fans kind of symbolize developer Dennaton Games’ take on the obsession from real fans. Well, you know, minus the whole murderous rampage aspect. I remember how rabid fans were after the original game came out, obsessing over it for days, myself included. I’m sure Dennaton was shocked by the love and praise they received, to the point that it’s made them intertwine this theme into Wrong Number.

“We tried to add some more emotions to what the player should feel while playing the game,” Dennis told me in regards to the different expectations, motivations, and dreams of what these characters believe their part in this universe is meant to be all about. “Not just feeling disturbed and awesome which the first game did. It’s still in there but we also tried to maybe invoke feelings about sadness.” 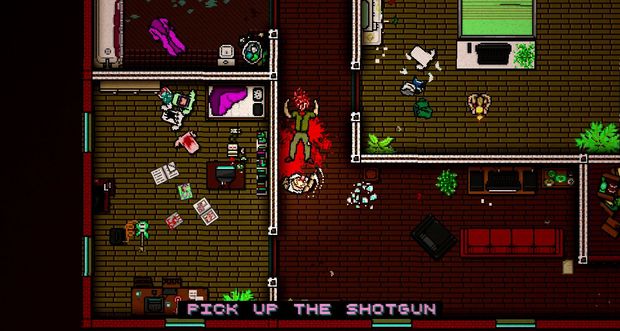 The core original gameplay that you loved from the first game is very much intact here. Dennaton is proud of how the original played, as were the fans. They are doing small tweaks here and there, adding new enemies, weapons, and gore. And yes, it’s still as satisfyingly difficult.

If you’re some of those freaky players that somehow found Hotline Miami too easy though, then you’ll be happy to hear there’s going to be a new hard mode, unlockable in the same fashion as in Super Meat Boy. Get an A+ in levels and the hard mode version will be unlocked. Some tools will be removed in hard mode, namely the lock-on ability. 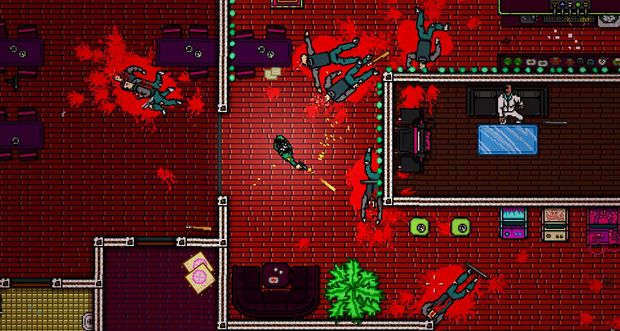 There’s no way you can talk about Hotline Miami without referencing the absolutely wonderful soundtrack. The music I heard in the Wrong Number demo was fantastic, giving off the same vibe as the original, and at one point while taking notes I wrote “SO FUCKING GOOD” in regards to what I was hearing.

Artists such as Perturbator, Jasper Byrne, M.O.O.N. are contributing to the soundtrack once again. Plus, after the original game was released Dennaton was approached by a bunch of people that had Hotline Miami-like music that will be featured in the sequel. 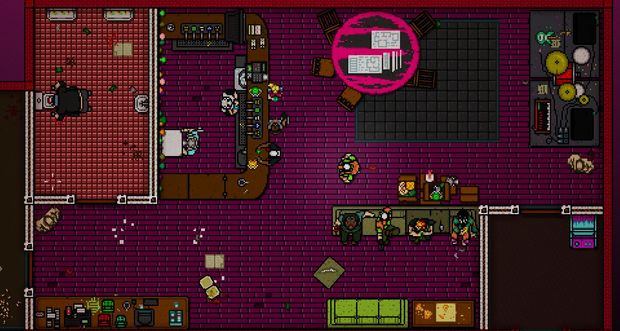 Hotline Miami 2 should be as long, if not longer than the first game, hence why this became a full-on sequel instead of the DLC that was originally planned. The team is looking into possibly offering players a map maker, and they’re even throwing around the idea of a multiplayer mode of sorts. Multiplayer would come as DLC though, if at all, as they’re focused on just developing the main game for release.

The original Hotline Miami was such an enjoyable experience, and Wrong Number easily looks like it will be even better thanks to its unique and messed-up storyline.