The people behind Twonky gave Destructoid $1,700 in prizes to give out to the Destructoid community! Twonky is a super easy to use Android app which allows you to beam any media such as pictures, videos, music and more from your phone to any web-connected device in your network such as TVs, laptops and more!

The Destructoid staff voted on the all the entries and we narrowed it down to one lucky winner! Congratulations to Capm Trevo for his submission above! He wins the ultimate prize pack that includes an Xbox 360, Sonos S5 Black, Dell Studio 15″ Laptop, lifetime license to Twonky, Linksys Wireless Router, Linksys Wireless-N gaming adapter and a full set of cables!

Congratulations also go to runner-ups AlanWake and Famousafterdeath. There were no runner-up prizes originally, but both of their submissions were so good that we’re going to be sending them Mr. Destructoid bobbleheads at the very least!

P.S. Killzone 3 contests winners will be announced by Saturday afternoon!

I don’t have much time left. It’s a matter of hours before dusk and the last sun ray fades away, and with it my last and only hope. I feel somebody’s presence around me, analyzing every single move I make. I feel him breathing upon me, maybe it’s the wind. I can’t tell what’s real anymore.If this is a dream I’m trapped in it. I have lost count of the nights that have elapsed since I have been here in Bright Falls. It’s as if time had stopped, stranded in this town in which there’s no sign of life, and furthermore in which surviving each day becomes my unique goal. 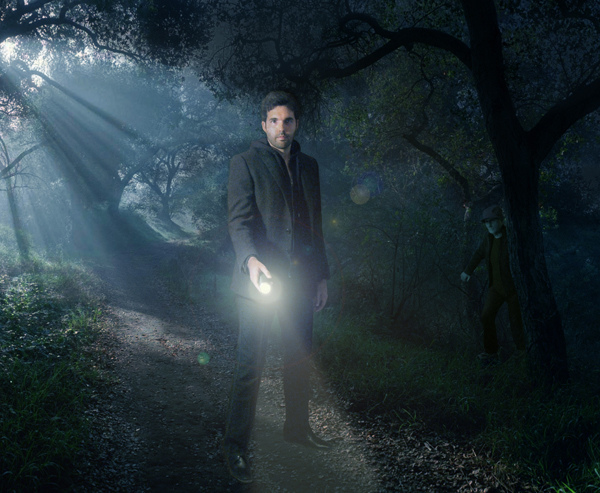 Darkness will soon arrive. I must return. I can’t stay in these streets a minute longer. My efforts to find a survivor have been fruitless. Perhaps nobody remains here, it must be too late. Even so, I’m still here from dusk to dawn day after day trying to make my plight be heard. I’ve tried everything, smoke signals, flares; every wall in this town is written with my plights. Nothing has worked to establish communication with the outside world. 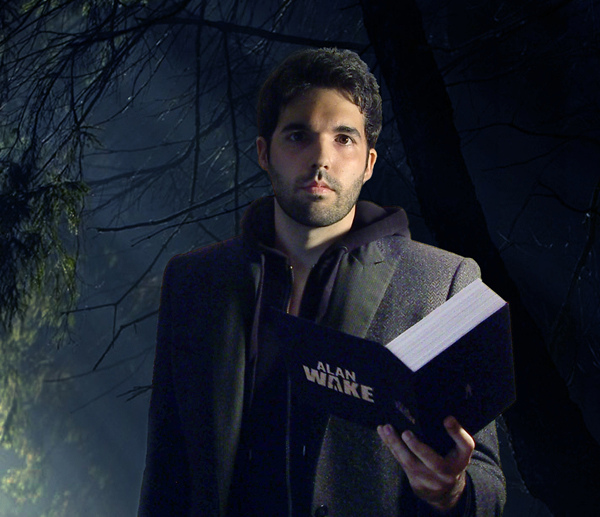 It’s time to go back. I pass in front of a window of an electronics shop. Much to my surprise I see a television set on; there may be someone inside. The shop would remain close tight like a fortress, chains and wooden boards block its entrance. Attempting to get in would be suicidal, time is running out. The only thing left for me to do is to leave some proof of my presence. Hopefully, whoever is inside would receive such signal and would try to find me within the hours of light of the next day.

I don’t know how the following idea crossed my mind: the best way to go about it was to leave a recorded message on the television set. Fortunately enough, somebody had left it plugged in to a digital media receiver. Perhaps this came about recalling those afternoons that Alice and I spent at home, lying on the sitting room couch after a long day’s work at the office. She would show me the pictures she had taken during the day with her cellular “to rouse me up” she said “to write a new novel”.

I could have never imagined that I would find my cell phone useful until then. Since this whole nightmare started I hadn’t been able to get even the slightest signal to allow me to ask for help. 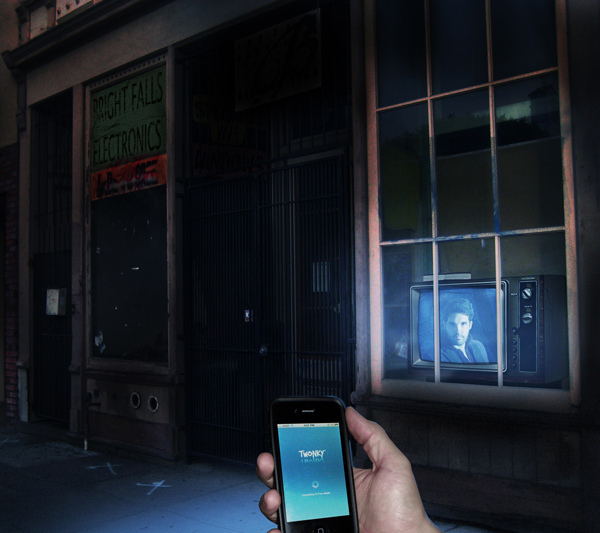 My name is Alan Wake. If someone sees this message: I’m stranded in this town hiding inside the harbor’s lighthouse. Please, I need to get out of here.

I recorded the message with my cell phone and left it playing it over and over again so that somebody could see it.

I headed myself to the lighthouse, couldn’t waste any more time. Night was very near. I ran along the coastal road to the shore, holding the flashlight in one hand, towards my destination. Suddenly I see something shining in the distance, something lying on the road. Once I got close I could make out a newspaper page that had probably been coated with fluorescent paint.

The person who had left such a page on that place wanted it to be found. Nevertheless nothing had been written on it. That particular page had an ad about a contest with some sections highlighted. It was as if he or she had been trying to cipher a message. 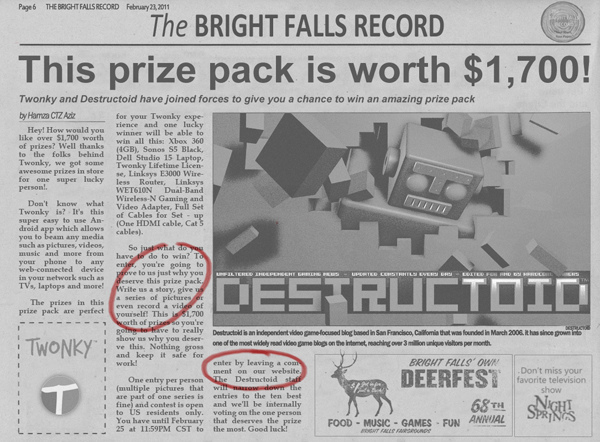 I quickly grasped the page and went on. Couldn’t stand still any longer. I thought I had better try to solve this mystery once inside my shelter. A few yards away I found a written message on a sign with the same type of paint I had seen before.

He must win it. Only he can put an end to this.

Who wrote the message? Who does he refer to? I wondered. I just knew I had to find that person. If what had been written there was correct, he would know how to end this nightmare. 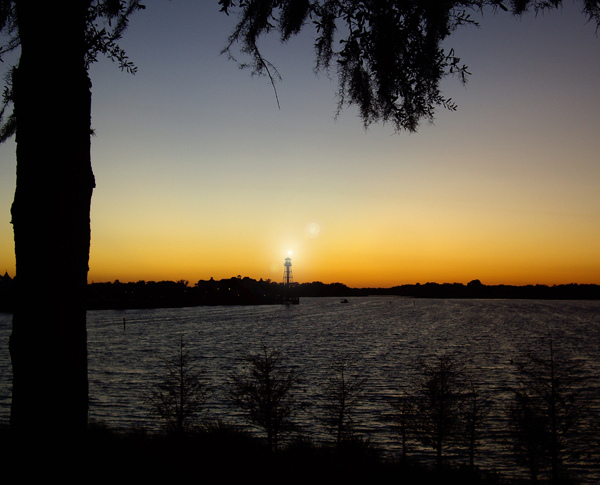 Little time remained to get to the lighthouse. I could make it out from afar.

Still feeling that presence. I noticed somebody was following me. Maybe it was a product of my imagination since I was being overcome by tiredness for days. I found another message on a rock this time and next to it another page from a newspaper.

He has to finish this. Make him win.

The page also belonged to the Bright Falls newspaper and on it there was an interview to a young boy. 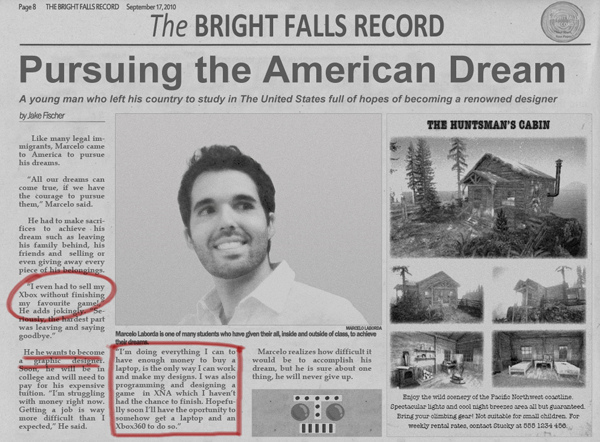 Were they trying to tell me that this boy should win the contest mentioned on the previous page because that was the only way to put an end to this darkness? 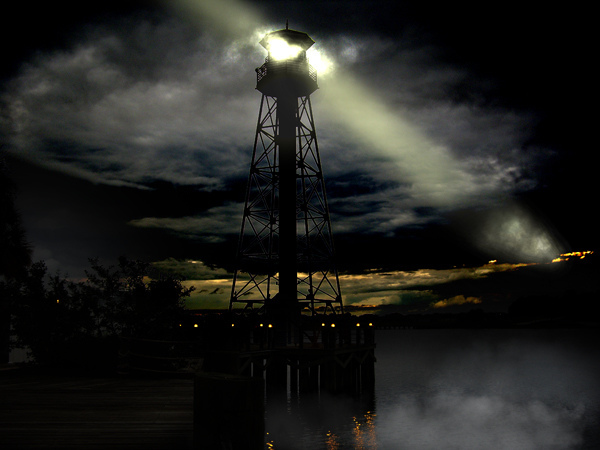 A few minutes later I managed to get to the lighthouse, the only secure place since it stayed lit all night. Even though I couldn’t find an explanation as to why I had to do it I followed the clues I had seen, I tried to get into the web page of the contest to sign up and post my entry. Innumerable attempts were made from my part to get enough coverage to send an SOS to the emergency services on the internet. Almost like a miracle I finally managed to access Destructoid and left this statement. Even with the lowest signal I could access the website, thanks to its mobile version named “Dtoid Mobile: Toilet Edition”.

I need your help. The only way for this nightmare to end is to award Marcelo Laborda the winner of this contest.

I’m writing these words as my last hope. Luckily, someone will read this and help me get out of here. 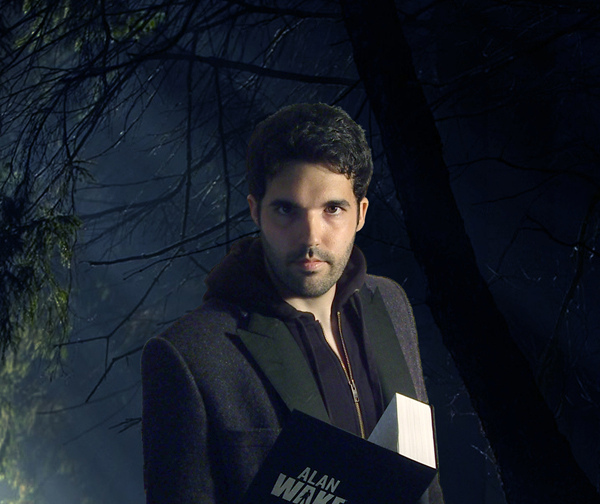 Filed under... #A Winner Is You!#android