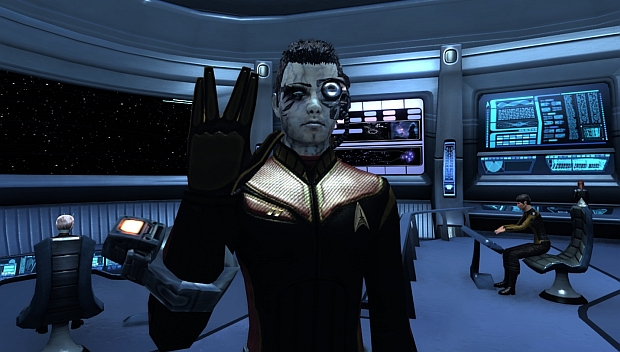 As you may have heard, The phaser-firing, starship-riding MMO Star Trek Online will be going free-to-play sometime this year, as did its Cryptic-developed cousin Champions Online. Of course, players both potential and current will be wondering one thing: What will I be missing out on if I choose not to pay? The quick answer? Not a lot.

According to this FAQ posted on the STO official site, the game’s new business model will be akin to the one Champions Online adopted: subscribers and users who bought the Lifetime Membership package will be tiered into “Gold”, with access to all the features available, while “Silver” players will have some limitations imposed, chief among them being a smaller inventory and item bank size, less free character slots, and a cap on how much virtual cash they’ll be able to hold in their virtual wallets.

Otherwise, both membership plans are identical in terms of access to content. Gold users will be able to use the “Foundry” mode to create their own missions and storylines, but Silver players will be limited to just playing said missions. Gold players will also be getting a monthly stipend of 400 “Cryptic Points” to use for microtransactions, in effect meaning that gold members will be effectively paid to play (at least if they went Lifetime).

In my estimation that’s not such a bad deal. Then again, I’ll end up a Gold member once the hammer drops. What say you, future Silvers?