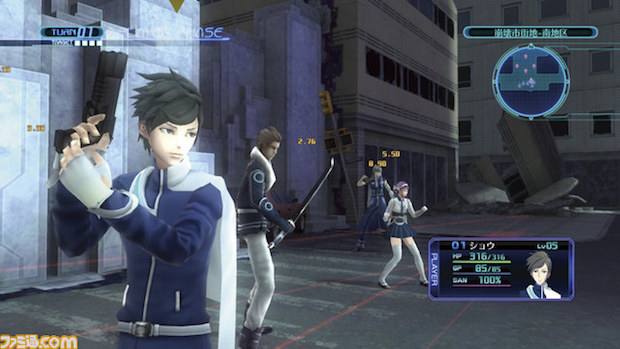 This week we’ve been talking up a new PS3 and Vita RPG from Lancarse, the folks behind Lost Heroes, Shin Megami Tensei: Strange Journey and two Etrian Odyssey Games. We learned of its name just yesterday, and today we can finally see what it looks like.

And it looks good!

Famitsu has the first look at Lost Dimension. They say that it tells the story of an agency called S.E.A.L.E.D. and their fight against the guy that is bringing about the end of the world. Typical RPG stuff, right?

In the debut screens you’ll see a few shots of the battle system and the world as well as the guy that’s going to bring about the end of the world (it’ll be obvious). You’ll also see two of the team members of S.E.A.L.E.D., Shou Kasugai and Yoko Tachibana.

I love the character design, and that’s probably because Makoto Tsuchibayashi is behind it. He worked on Devil May Cry, Sengoku Basara, Vanquish, and others as character designer.

Lost Dimension will be released on August 7 for PS3 and Vita in Japan.

I’m looking forward to hearing more about this game. You?