Hands-on preview with Gears of War 4

Despite its bro appeal and casual association with the likes of Halo and Call of Duty, multiplayer in the first Gears of War 10 years ago was practically tacked on. Former Epic producer and continued Gears rudder at The Coalition, Rod Fergusson, says it was a 90-10 split between resources spent on single and multiplayer. With Gears of War 4, or Ge4rs (or Gears of Four), the multiplayer design lead has been there from go.

I was able to play a couple hours of Ge4rs multiplayer last week to try and get a handle on what Fergusson calls, “the best Gears of War multiplayer experience ever,” which means, in this case, walking back to, and then expanding upon, Gears of War 3.

You’ll be able to soon, too. Ge4rs is getting a beta on April 18 for anyone who’s played Gears of War Ultimate before this week. On April 25 it will open up to everyone with an Xbox Live Gold account. Until then, let me tell you about my flailing near-adequacy across three maps and a new game mode.

Here are some things I’ve forgotten about Gears multiplayer, in general. It is laborious. It is even tactical. Team Deathmatch starts with a 15 life pool per team, each death stripping a number away until it hits 0 and then each player is on their last life. I love the pressure of that system, versus a race to the highest number. Active reload is still good as hell — the strangest thing to not have been cribbed from a series important in popularizing the third-person cover shooter genre that would help define a console generation. And don’t forget to tag enemies you spot.

The Coalition is embracing the “intimate violence” of Gears, which is almost violent to the point of comedy, where the scattered viscera of a well-timed shotgun blast is “like popping a balloon.” It’s kinda grimy, sure, but it’s also exaggerated slapstick. One of the new weapons, the Dropshot, epitomizes this. There are just two new power weapons in Ge4rs. The intent is to make sure they have character, that they aren’t different takes on existing weapons for the sake of bloat. There’s already a bow, after all. Why try to come up with a second bow?

On the side of intimacy, Ge4rs features as much cover-hugging as you’d expect, with added “Close Cover Combat” to wreck those peekaboo-ass mother fuckers on the other team. The “yank and shank” allows you to snatch an enemy from the opposite side of cover like a mama cat dragging a kitten by its neck scruff. Once they are on your side of the wall, you are free to knife execution the shit out of them. Don’t feel like snapping to cover yourself, just to pull them over? Try the Vault Kick. You can sprint in the direction of your covered enemy and without slowing down hood-slide across and put your boot in their face. Then you knife execute the shit out of them. 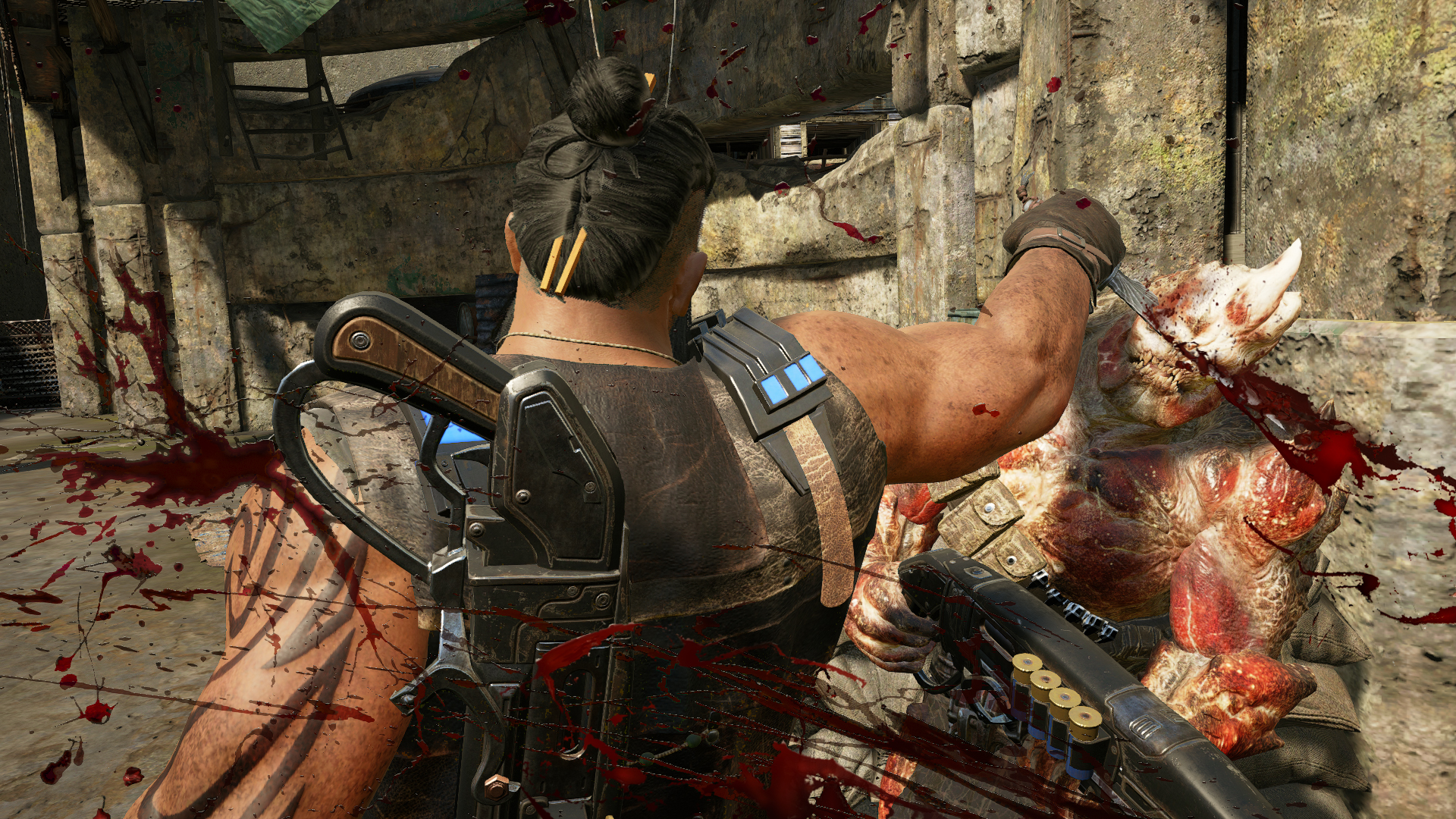 The knife executions are gross and cool. It’s like you’re Gallagher and this asshole’s face is a watermelon and also your knife is a mallet. I honestly question the efficiency of stabbing someone in the face as opposed to, like, the neck, but Gears is a game wherein the logical conclusion to the idea “bayonet” is “chainsaw” so it’s appropriate.

Two new multiplayer modes, Dodgeball and Escalation, and a bot-enabled Co-op Versus mode round out the new offerings. Escalation will be detailed more heavily at PAX East, but it’s the main competitive offering in Ge4rs‘ eSports ambitions. A spectator screen with four camera options are meant to help make multiplayer watchable. Dodgeball is a fun play on one life, no respawn modes; everyone has one life, but you can bring back a teammate from the dead by scoring a kill and staying alive for five seconds afterwards.

Single-player is going to be 30fps, but multiplayer is a smooth 60fps at 1080p on Xbox One, though your experience with the beta later this month may vary (we were doing LAN play). At launch Ge4rs will have 10 maps (Gridlock and 9 new ones) and “1 to 3” will be added each month. To avoid having two many maps, when monthly maps are introduced, other maps will cycle out of rotation.

While the new maps each month (which may be redone versions of past Gears stages) will be free, you’ll have the opportunity to purchase your favorites for use even when they’re not in the playable rotation. And only one person has to own a cycled out map if they want to host a private game on a dedicated server to play on it with others. A similarly atypical addition is Gear Crates, three-tiered items (containing consumable cards of four rarities), that can be purchased with credits earned in any mode. In multiplayer, only aesthetic cards can be used; here’s where you’ll get alternate character skins and the like.

Ge4rs isn’t throwing too many curveballs, though I want to see how Escalation plays out. Still, murdering about in the beta also reminded me it doesn’t necessarily need to, given how different its multiplayer still feels compared to a lot of the stuff on the market.