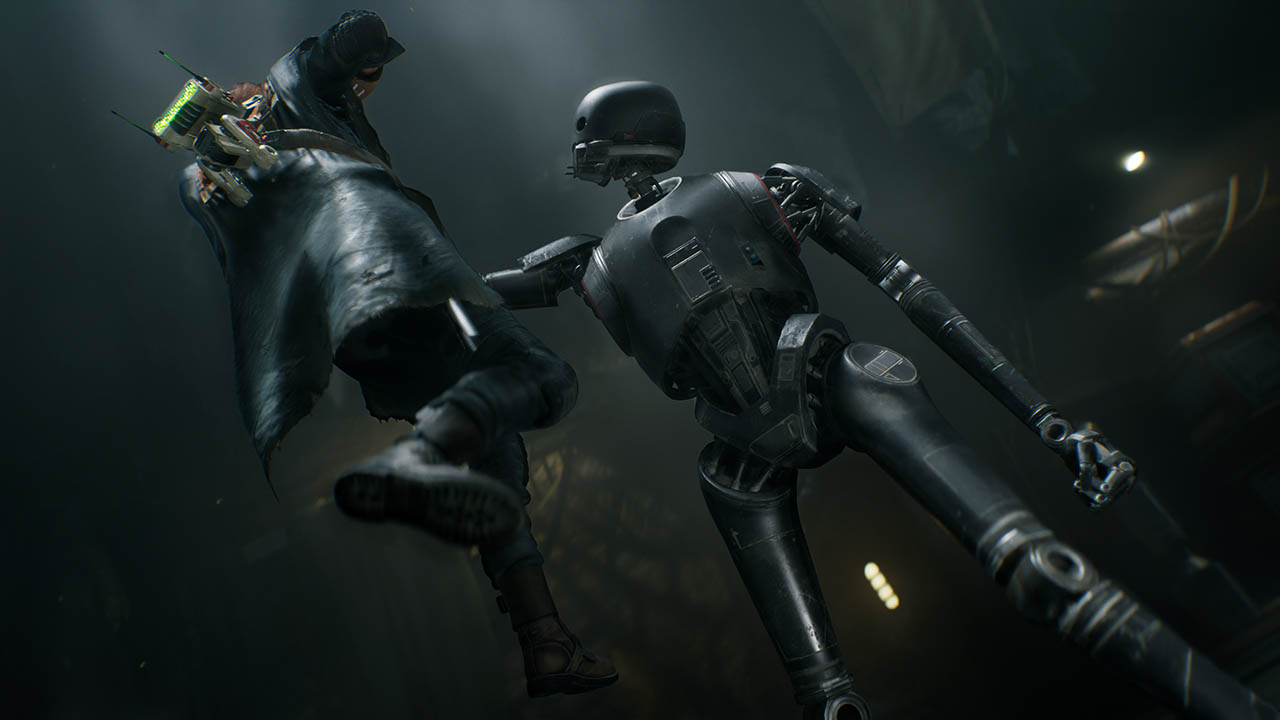 EA responded to complaints that Star Wars Jedi: Fallen Order’s reveal didn’t contain any actual gameplay by opening its EA Play event with a 15-minute-long gameplay demo. It had everything you would expect in a Star Wars game: lightsaber fights, force powers, and an adorable droid, but still nothing was mind-blowing and the dialogue — like that high-ground quip — didn’t help. You can check out some Luke-warm (Respawn’s not the only one with bad Star Wars jokes) impressions here.

Thankfully, that’s not the only gameplay revealed this weekend. In an isolated spot across town from the E3 show floor, EA presented an entirely different view of Jedi: Fallen Order and I loved it. The only problem is that most people who tune into the live stream don’t have the option to travel all the way to Los Angeles, and there’s so much most fans don’t get to see happening live at EA Play’s physical location.

So, I made the trek for you. EA Play is essentially a carnival dedicated completely to video games. There is something to see everywhere you look with booths that teleport you into Apex Legends or recreate a full soccer field to celebrate FIFA. Add in stages showcasing your favorite personalities and a food truck court, and it really is a day at the fair for E3 goers. To sweeten the pot a little more, EA Play also lets you secure one reservation to a special game demo, so you don’t have to stand in line for absolutely everything. I took advantage of this to be one of the first in line for Jedi: Fallen Order.

If you couldn’t make it out to LA for the show, or just missed out on securing tickets for this limited demo, here is what you didn’t see on EA’s live stream. 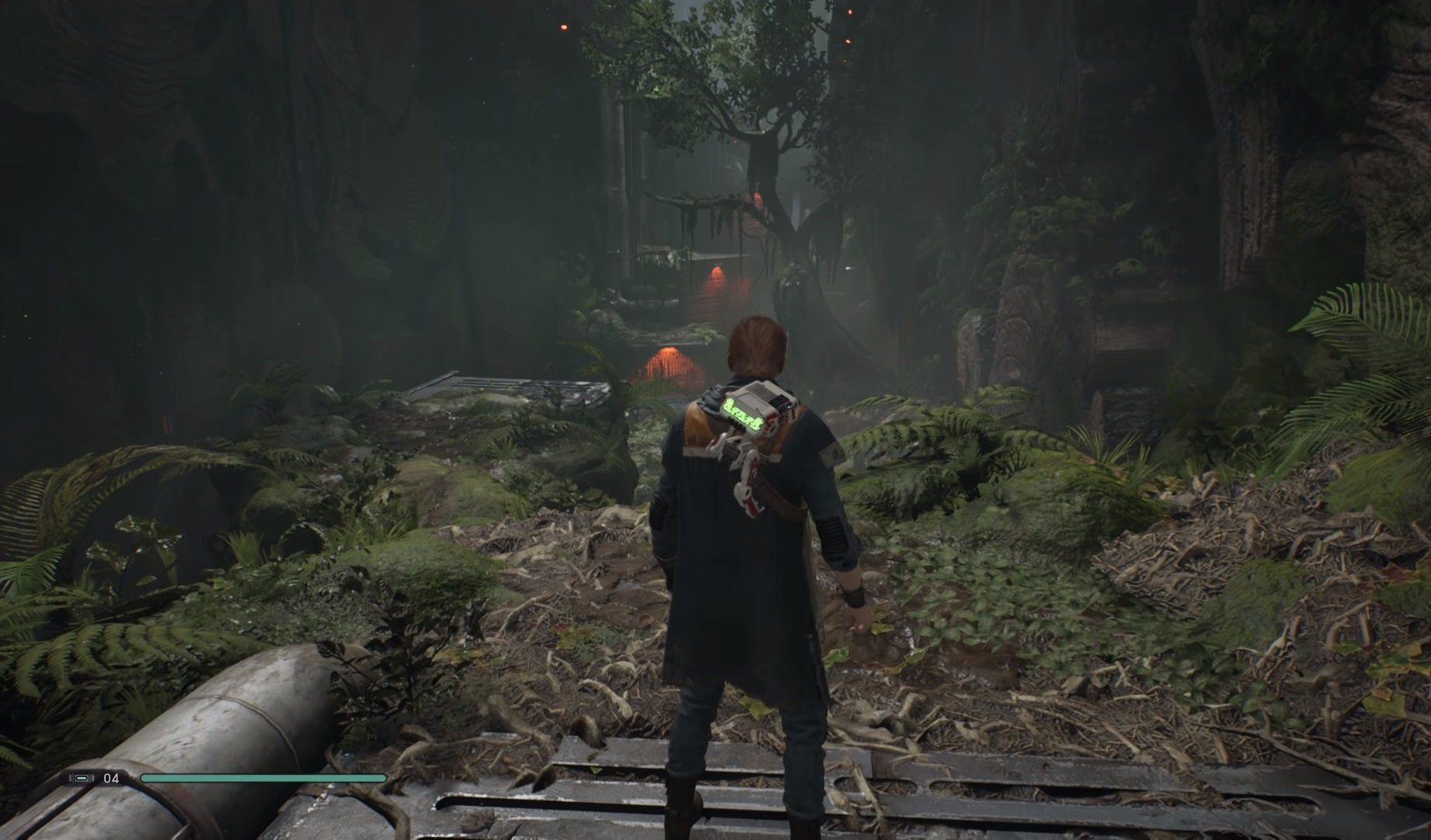 Water stretches across the screen. Smoke drifts ominously over its choppy, murky, and weed-choked surface. The tension hangs for a moment before BD-1 breaks through into view followed quickly by Cal. The camera shifts, revealing that they are not alone. Giant AT-ATs are strolling through the water like it was a puddle. Cal and BD-1, despite looking like ants compared to the gargantuan machines, head toward them. Even crammed into an enclosed freight container-like space, sitting way too close to a guy who was all elbows, and the tantalizing smell of grilled meat wafting in reminding me it was nearing lunch time, I felt some serious excitement.

The heroes slog their way towards the AT-ATs and I don’t envy them one bit. A battle is raging all around. Tie fighters actively chase down resistance fighters as the resistance targets the walkers. Cal and his droid scamper through the limbs of a lumbering AT-AT and then decide to climb up one hulking leg, even though ships are crashing around them and there are as many close calls from friendly fire as from enemy blasts. It’s dynamic, has epic scope, and leaves me wondering we they didn’t show this extra fifteen minutes of gameplay to everyone.

Through a series of lucky strokes and near misses, Cal infiltrates the AT-AT and has time to show off some more of his Jedi training with the guards who came prepared with some ineffective anti-Jedi melee weapons. I thought we were going to settle into the same fights we saw during the stream, but then Cal made his way to the cockpit. A prompt to ‘distract’ appeared on the screen and the young Padawan took the controls without much trouble. 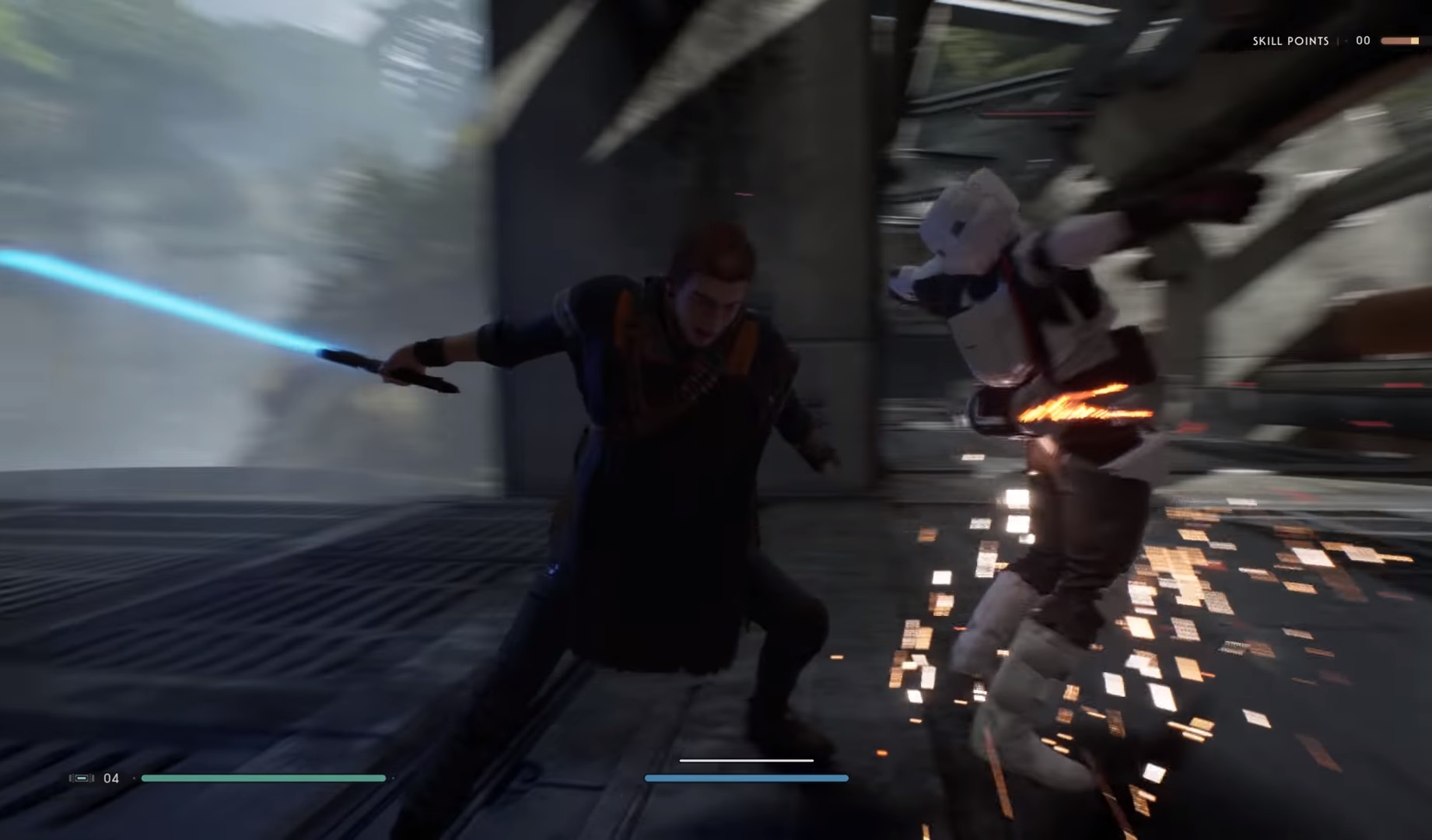 I expected that to be the end because the enemy had been neutralized, but no, he jumped into the pilot seat, with faithful BD-1 acting as co-pilot, and started controlling the AT-AT. Cal cleared a devastating path through the battle with some awesome blaster action, and I am so ready to do the same when I get my hands on the game. The AT-AT wreaks glorious havoc on everything in its way, be it aircraft, stormtrooper, or other AT-AT. At this point, you have your first meeting with Saw Gerrera. He unceremoniously sticks to the front window out of nowhere to ask who you are and how you can help his mission. It’s a crazy way to meet someone, but he doesn’t seem like a conventional kinda guy.

After your meeting, Cal hurdles headlong into an imperial base and starts absolutely wrecking it. The AT-AT controls let you pick off individual enemies from towers, destroy things like bridges blocking your path, and gun down those most common of video game staples: explosive red canisters. It looks like it will be a cake walk until Cal is confronted by an imperial ship. The two go nose-to-nose basting away at each other until, with the ship is barely holding up, it deliberately flies into the AT-AT, causing both to crash to the ground.

Luckily, Cal and BD-1 survive the crash and meet up with Saw and some characters he seems to be familiar with in the newly-taken base. This is a nice look at just wandering around and NPC interaction. Cal explains to an inquisitive Saw that he is “looking for somebody” and he is on “Jedi business.” It sounds like big barks from a small dog, but it gets him past the resistance leader. With nothing immediately claiming our attention, Cal turns to his friends. The prompt to talk leads to a couple dialogue choices. Nothing fancy, just slight variations. Like when one of his crew asks him if he is going to trust Saw, the dialogue tree gives options along the lines of  “You don’t?” or “That’s the plan.” It’s nothing earth shattering, but maybe it will become more interesting latter. 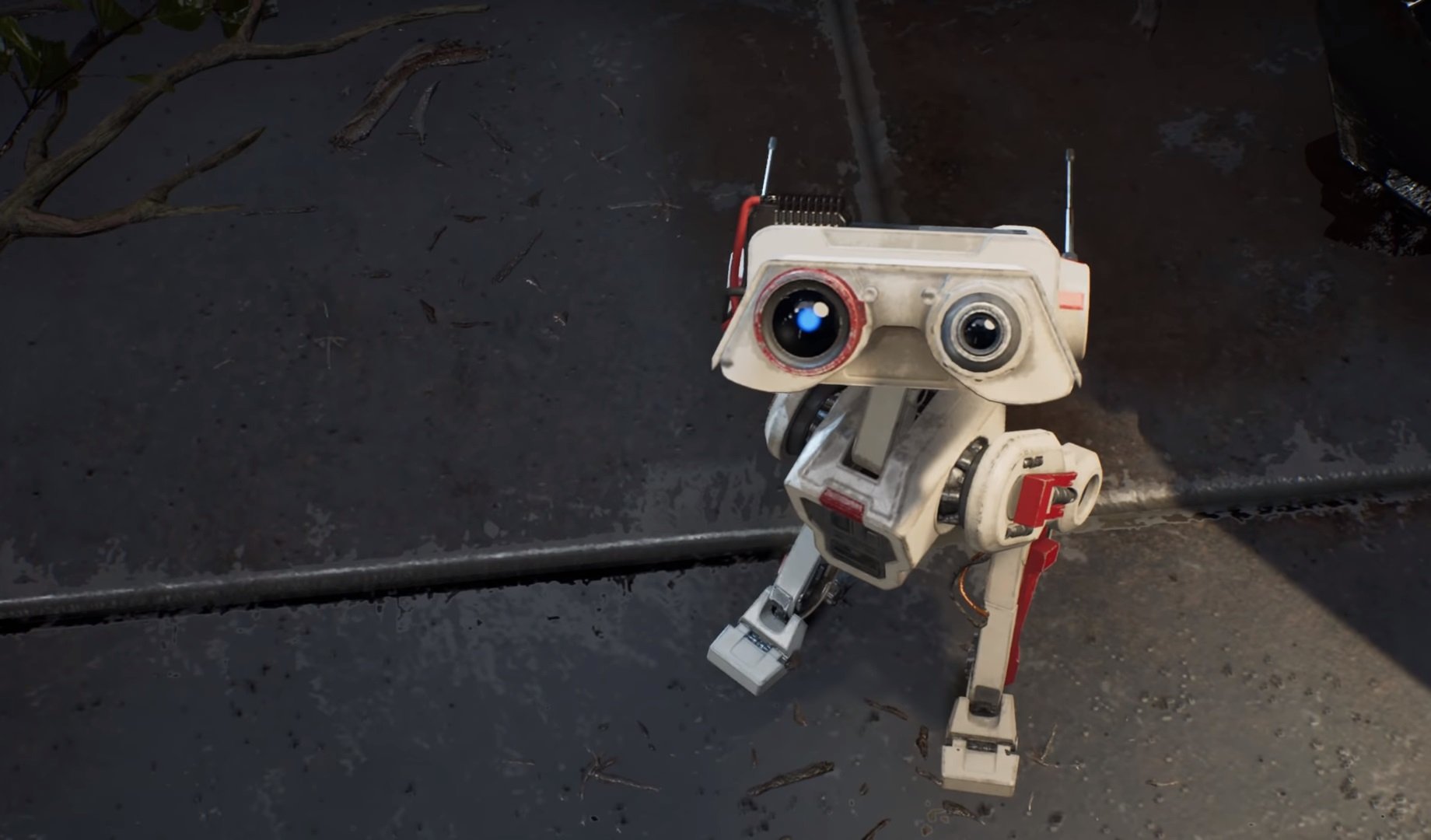 Cal quickly runs aboard the ship his friends rode in on and opens an galaxy map. It looks like at this point in the story, there are four different planets to view, but whether we can fly to those or that is just for information is unclear. Leaving behind this safe haven, Cal heads with BD-1 where the droid scans various things in the environment, like a weapons cache and a control panel. This seems to log information in a menu somewhere that the play can read at their leisure. From here, we get back into the demo that EA streamed on Saturday.

Though it is obviously a different run through, the paths and enemies look increasingly familiar. Oh, and of course they couldn’t resist throwing in another one of the big freaky spiders that drop out of nowhere before returning to the opening moments of the live stream. One difference worth noting in the theater play-through version of the demo is that they gave us a brief glimpse at the skill tree screen. I know I was itching to see it every time the player on the stream gained a skill point. Sadly, it was gone in a flash, but I did see a skill tree with icons that totally engulfed the screen and there were at least two different branches for your lightsaber and Force skills. 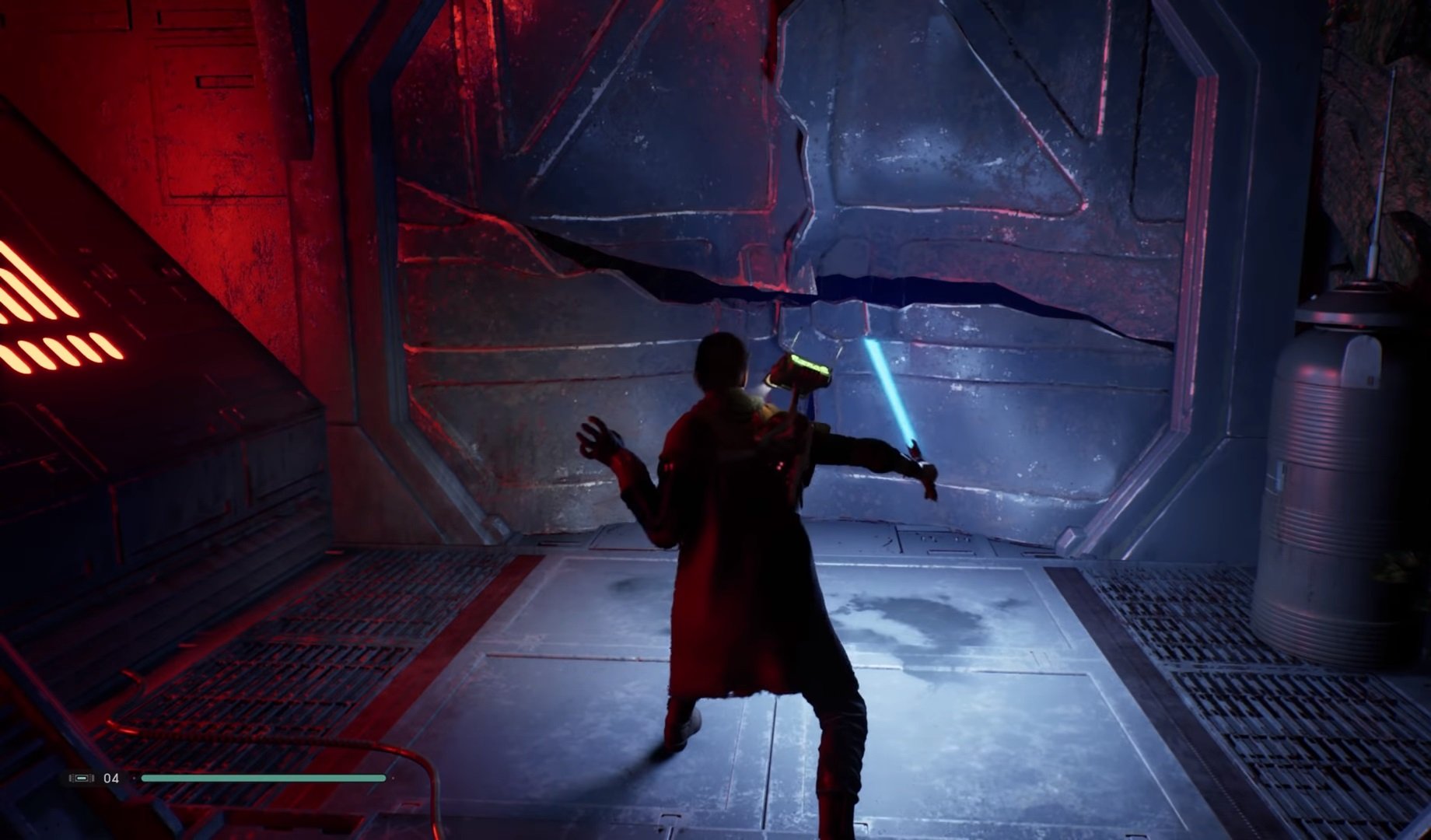 That’s the extent of the new footage EA didn’t show you but really should have. After seeing some real action, I am actually feeling confident that Jedi: Fallen Order has some kick to it. Hopefully, Respawn can give us the Star Wars game we’ve been waiting for.

Want to get the scoop on the other games at EA’s live stream? You can head here to watch EA’s full show and here for more on Apex Legends, Battlefield V, The Sims 4, and the newest FIFA and Madden titles.