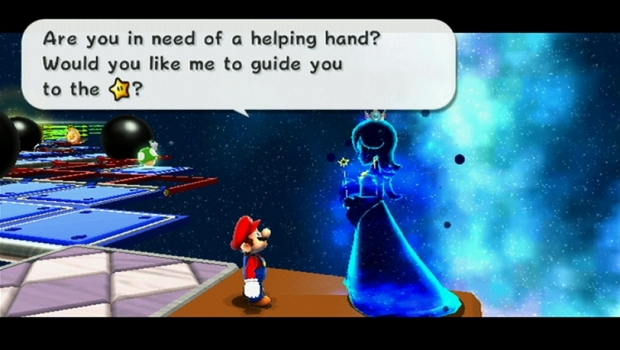 I got to check out Super Mario Galaxy 2 at Nintendo yesterday and one of the new things that was revealed to me was Galaxy 2’s version of the Super Guide feature seen in New Super Mario Bros. Wii. There’s actually two systems in place to aid players: Hint TV and the Cosmic Guide.

Mario will come across special TVs in levels which will show him how to get across certain sections. In one of the levels in the Fluffy Bluff Galaxy, there’s a large open space that Mario needs to get across using the cloud suit. Hint TV will show the player how they should tackle the obstacle presented to them. Once the tutorial-like video is over, the player is free to proceed as they wish.

The Cosmic Guide is Galaxy 2’s version of the Super Guide. If a player finds themselves dying too much or is stuck in an area too long, the Cosmic Witch (pictured above) will come to the player and give her assistance. You’ll be able to jump right back in at any point if you let the Cosmic Witch take control of Mario with the press of the + button. Using the Cosmic Guide, however, will automatically give players a bronze star instead of a gold star.

These helpful additions to Galaxy 2 means a harder Mario game, just the way I like it.