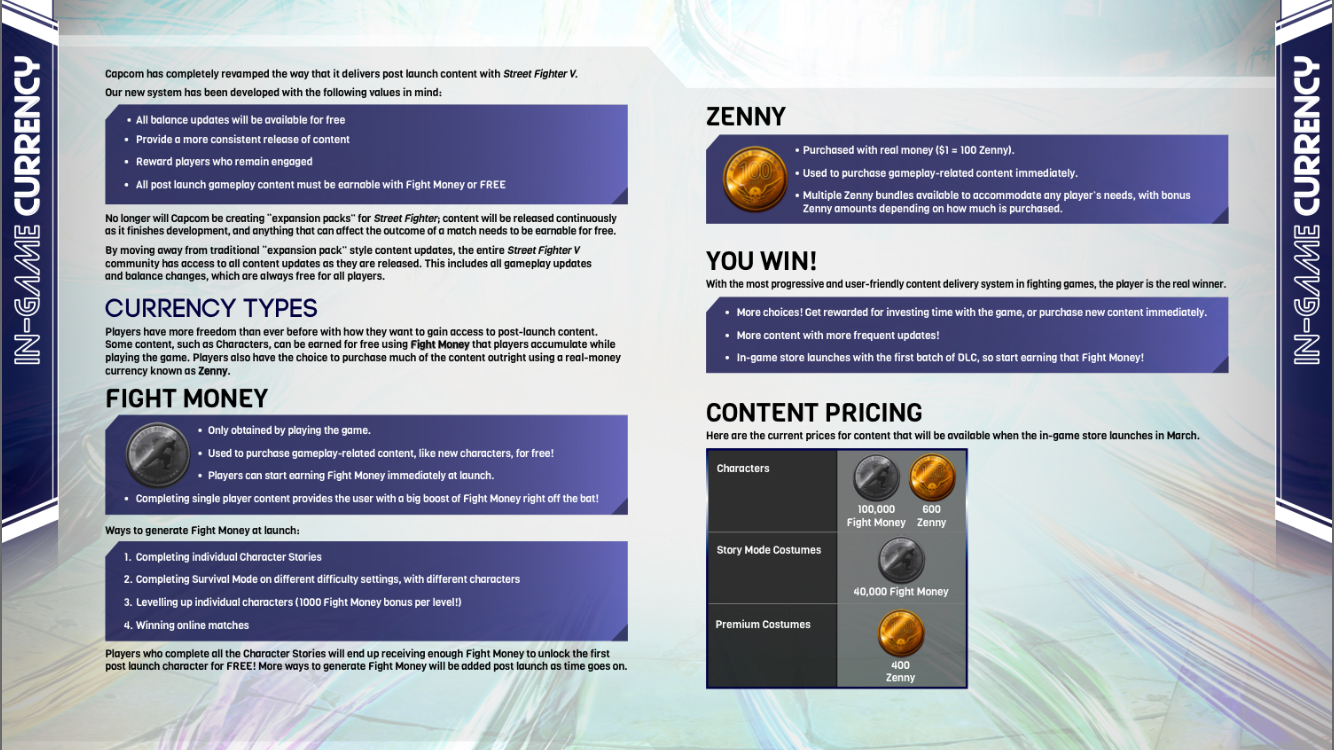 Street Fighter V is out, and as of this morning, the Fight Coin switch has been flipped. Here’s the rub.

Fight Coins are basically an earned, free currency, that you get from completing various events. Playing a “story” (read: less than 10 minute prologues) will net you 10,000 each clear, and a win online nets you 50. With one survival clear per character (there’s 16 characters and four difficulty tiers for each one) you can net 6,000 coins each. You can also opt to buy into a premium currency called “Zenny,” which will run you $1 per 100. Characters (here’s the current schedule) cost 100,000 Fight Coins or 600 Zenny, story mode costumes cost 40,000 Fight Coins, and premium costumes are 400 Zenny.

On paper, you’re getting one and a half characters outright (160,000 coins from just the prologues) for a few hours of work. That’s…not bad, since said characters would be sold as paid DLC anyway. But Capcom is counting on you spending your currency on outfits, leaving you with less and less cash to buy characters with. It’s a common strategy that’s used in a lot of games — hell, the free market in general. If you can resist the temptation, you’ll likely come out on top.

Assuming the well of solo coins dries up, beyond that, you’ll need to win roughly 2000 games a month to get a free character. But there are concessions. Leveling up a character by playing them will net you an extra 1000 coins per level, for example. When the shop opens in March, more prices emerge, and other modes arrive, we’ll update accordingly. For now, the high rewards for single-player content are great, but we’ll see how easy it is to earn Coins once players cap their levels out. “More ways to earn coins will be added throughout the year” Capcom says, but for now, this is just a promise.

After actually seeing it in action, I don’t think Capcom should be praised for this strategy, nor should it be crucified. There’s some sleaze at work here mired by confusing currency schemes, but ultimately, I’ve earned enough coins to buy two DLC characters on the first day — so there’s something to it. If they can keep the game as one SKU, as promised, that will be praise-worthy. But that concept has yet to be proven.