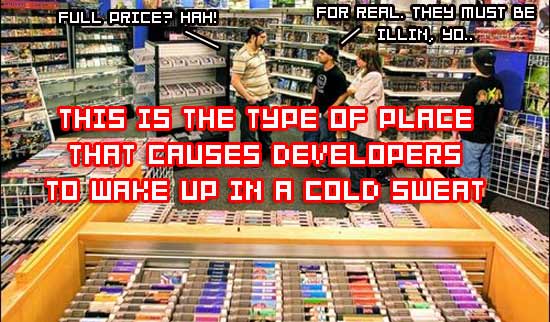 If you happen to be the type of person who prefers the used game market in lieu of paying full price for your next fix in what amounts to an already expensive hobby, then Free Radical’s David Braben has a few choice words for you. While you might be saving yourself some change, David wants you to know that developers are ending up on the short end of the stick when it comes to the second-hand gaming market. While absurd to most of us, his logic behind this is simple. Developers only get paid once for every title released, while retailers get 100% of the profits for themselves, every time a used game changes hands.

“Clearly from the developer and publisher point of view, the second-hand market is a real problem. The shops are essentially defrauding the rest of the industry by this practice, whether they intend it or not. It also means that while newly released games do still sell well, it is only a matter of a month or so before pre-owned stock often saturates the channel – with a single copy rumored to go around the sale/return/sale loop ten or more times – amounting effectively, to rental.”

Now I’ll be the first person to scoff at how these specialty stores sell used games for just under the price of a sealed copy while giving you pennies on the dollar for trade-ins, but the thought of giving a “cut” back to developer/publishers (which is more or less what is being alluded to) sounds more like something out a Mafia novel. Best of all, just who exactly is going to pay for the difference? The customer, of course.

This brings to mind a few interesting questions: Are we looking at a future where all games will go the way of the MMO and require individual keys to unlock them each time they change hands? Does this give more ammunition to electronic distribution, and does it hasten the death knell of the already fragile rental market? Most of all, is anybody stopping them from selling used games?  If this is such a big issue, then why not throw their hat in the mix, and offer us an incentive to sell our games back to them.