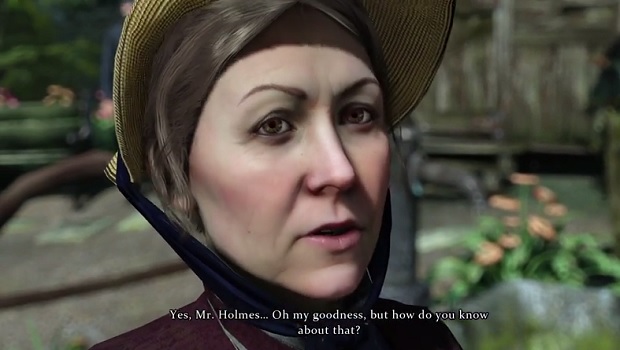 You can now customise your own Holmes!

There are “gameplay trailers” and then there’s this trailer for Sherlock Holmes: Crimes & Punishments that shows off a whopping 23 minutes of gameplay from Frogware and Focus Interactive’s upcoming adventure game. Following on the heels of The Testament of Sherlock Holmes, Crimes & Punishments will be released later on this year. I was pretty wary about watching the trailer because, like most people, I want to go into the game fresh, but there are some really cool new mechanics.

The main one (aside from being able to customize Holmes’ appearance) is the Character portrait system which is attempting to recreate Holmes’ deductive abilities, like looking at a man’s shirt and drawing information from simple details. That’s the thing that the Sherlock Holmes games have lacked; previous installments recreated the character and setting, but none have really grasped those wonderful moments where Holmes is seemingly plucking clues out of thin air.

It seems like Crime & Punishment has a much more rounded detective experience than the previous games, all of which were focused on longer, over-arching cases. Here, you’ll take on multiple crimes throughout the game with the chance to convict or absolve a suspect once you’ve made up your mind. Hopefully, this open ended structure will lead to some replayability, especially if you point the finger at an innocent person or let a guilty party get away.