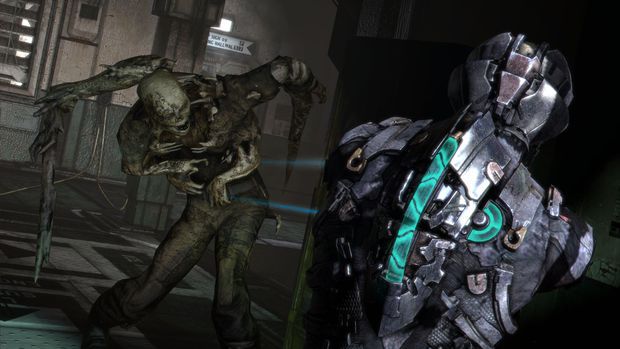 The latest look at Dead Space 3 features the creative director and the senior audio artist as they walk us through Isaac on the Eudora spaceship. The footage starts off very intense, as Isaac has to put on a spacesuit before the ship he’s on blows up. There’s a great look at the the Zero-G segments too, which feels great.

I should know, because I played this section at gamescom. Also, take a listen to the music that’s playing as Isaac is flying through all the debris. It’s hard to hear it as the two gentleman are speaking over it, but it gave me goosebumps the first time I heard it.

The footage also shows off the new Lurkers, which are now dogs instead of babies now. It’s the first time we’re seeing how the Necromorph infection can alter animals, and it makes me wonder what a Necromorph whale would look like. Or Necromorph llama.

Annoyingly, this demo video only shows Isaac using the Plasma Cutter. Annoying because you can now create guns from the ground up to create crazy weapons. Still, a great look at how Dead Space 3 is coming along.