Borderlands: The Pre-Sequel‘s free, limited-time mini event Bloody Harvest Celebration just launched a couple hours ago. The teaser image has several pumpkin-flavored pieces of art, but little extra information. I jumped into the shoes of my trusty Enforcer to check out what is new.

To access this content, you will need to go to Regolith Range. It does not have its own Fast Travel station, but it can be reached by fast traveling to Serenity’s Waste (the first area Vault Hunters explore upon landing on Elpis) and taking a vehicle to one of the two entrances. I recommend the exit in the southeastern part of Serenity’s Waste, because it leads to the part of Regolith Range closer to Undeadlift, the local boss fight.

Upon entering Regolith Range, the event’s slight differences show up. Most of the Scavs have jack-o’-lanterns on their heads, all of the exploding barrels are replaced with Bloody Harvest Barrels, and it might be my imagination, but the area itself feels like it has an orange tinge to it instead of its normal blue/red palette.

Most of the content does not affect gameplay significantly. The pumpkin-headed enemies give them much larger hit boxes for critical damage, so landing headshots is easier. Otherwise, they act just like their normal bandit selves. The candy cash is purely cosmetic, replacing the dollar bills with hard candy without giving it any additional function like the candy pickups found in last year’s Bloody Harvest DLC.

When ruptured, Bloody Harvest Barrels will explode initially, then after about one second a few pillars of fire will burst upward from the ground in the immediate vicinity. Neat. 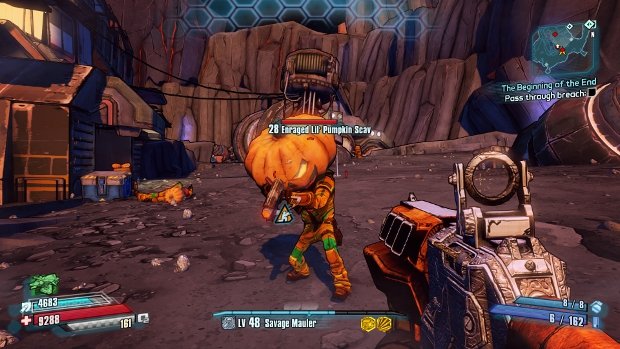 The boss fight with Deadlift is unchanged, aside from the facts that he too is wearing a pumpkin on his head, and he is billed as Undeadlift now.

Undeadlift does have a chance (not a guarantee) to drop a unique weapon called the Jack-o’-Cannon. Depending on whether the player is in Normal Mode, True Vault Hunter Mode, or True Vault Hunter mode post-Sentinel, the gun (and the enemies in the area) will be around level 4, level 30, or level 50, respectively. For long-term benefit, this event seems most helpful to those who have already played through twice. 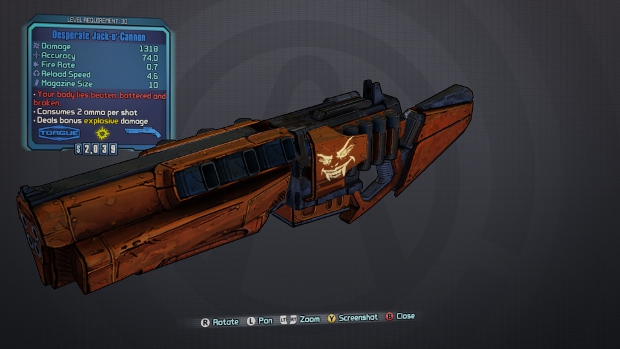 The Jack-o’-Cannon is a Torgue shotgun, so it naturally has a relatively low fire rate and deals explosive damage. It is shiny orange and has a cartoon vampire face painted on the side. It requires two ammo per shot and fires pumpkins that explode on contact with enemies or surfaces. The pumpkins are slow-moving and follow an arced path, but they appear to have a fairly large explosion radius and good damage.

So that’s what you can find in Borderlands: The Pre-Sequel‘s Bloody Harvest Celebration event. It runs through November 2, so players have the weekend to check it out. For a free bit of content, it’s pretty cool. I hope they do more stuff like this, in addition to the more meaty, paid DLC that is down the road.