We’ve all seen the Angry Video Game Nerd episode where he compares the SNES with the Sega Genesis and mocks the “blast processing” thrust of the Genesis’ marketing campaign. It seems silly now to think that slapping a vague buzzword on technical specs could push people to buy the console, but hey, enough of us played Streets of Rage and Sonic 3 that it must have worked. 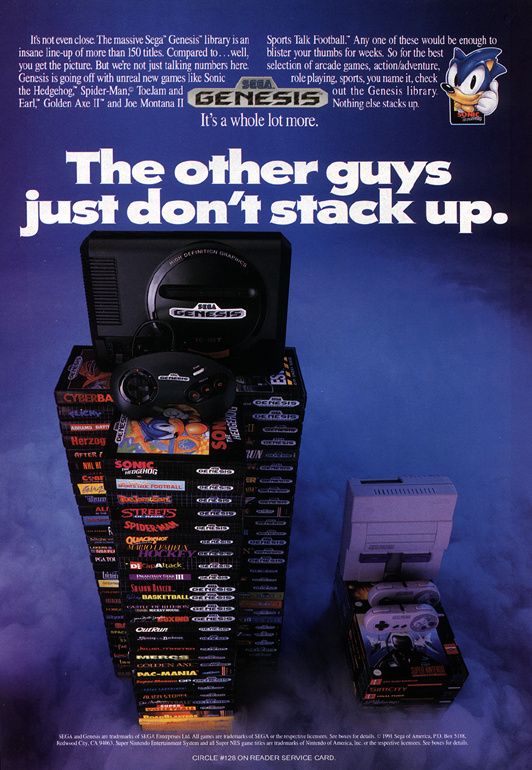 Flashy adverts have been a mainstay of the video game industry for a couple of decades, now. Some of them bore into our brains because they are fun, or exciting, or perhaps even make the soft-hearted among us cry. Sniff. So what are some adverts, i.e. TV ads or YouTube trailers, that I dug up during my research? Ones that I remember from back in the day, perhaps, and that struck a chord with me? Get your box of Kleenex at the ready while I show you my faves.

I was beyond stoked when The Sims 2 was released, because I played the original Sims to almost obsessive levels when I was a tweenager. I used to read the soap-opera style diaries other players uploaded to the Maxis homepage – I can still remember the Vanderbilt ones – and I tried to construct intricate backstories for all of my own families. When I learned that Mortimer Goth and his dear daughter Cassandra would be in the next version of The Sims, just not quite as I knew them, I was even more ready to make the upgrade.

The advert for The Sims 2 shows exactly why I was so hyped for the second version of The Sims. Beyond the improvements in graphical fidelity, it gave you more control over each generation within your Sim families and also direct control over the aging process, if you bought the Elixir of Life. The Sims 2 is one of the most memorable games from my younger years full-stop, and the fun advert shows just how your families can blossom over the weeks and months of pouring time and effort into their lives. If you can cast aside the unfortunate stereotype that redheads can set fire to things with their breath, and lest we forget, the flashing grandma, it’s an example of how to do fun, bouncy advertisements just right.

Oh, by the way, if you didn’t make Mortimer live forever to bring home the bacon, you were running the Goth household wrong in The Sims 2. There, I said it, I’m a monstrous Sim God. Next.

This one, you guys! This trailer came out when I was listening to TalkRadar and other early video game podcasts more than I was actually playing games myself, and all the talk of Dead Island was extremely positive after this advert. I still can’t watch it without tearing up; it’s a masterfully executed work of art that won awards for good reason.

It’s just a shame that the game itself didn’t run with the emotional family storyline it put forward in its announcement trailer. Starting the game with “Who Do You Voodoo” made it clear that it wasn’t going to be a schmaltzy family story, for better or for worse. Thankfully, many other franchises already provide us with that experience, including the Evil Within franchise, further down in this list.

It’s the law that if you slap Gary Jules’ cover of the Tears for Fears song “Mad World” over the top of anything, it gets all existential and gloomy. The Gears of War franchise has a bit of a bad reputation for being all guns, hulking monsters and no heart, but you wouldn’t get that impression from this advert. It paints a picture of isolation and loneliness in a destroyed world that, sure, is getting put back together by men with biceps biggest than my entire head, but is tinged with sadness. Rewatching this ad actually makes me want to buy a second-hand Xbox 360 and see what I missed.

Time for a short-but-sweet one. Can we just ban Debussy’s “Clair De Lune” from, like, everything? Not because it’s a bad track…no no no. But because like those Christmas ads from a couple of years ago that were flooded with pugs and more pugs, I am going to buy your shit if you include it. It feels like a cheap move. You know my Achilles heel, marketeers!

Yet “Clair de Lune” is in the ad because this is the save room music. In fact, the game uses another classical tune to add atmosphere in the intro, Johann Sebastian Bach’s “Air on the G String”, so it isn’t a grab for attention, but rather an accurate depiction of the game. It lends this creepier edge to the game and pays homage to other survival horror games that have made use of classical music, such as the original Resident Evil game (which has you play a wonky rendition of Beethoven’s “Moonlight Sonata”). And given that Shinji Mikami was behind The Evil Within, it couldn’t be more apt.

As I discussed in the communal piece on games that resurrected franchises that is going up today, Mario games need to make a bold statement. Nintendo has built most of its business model around just one or two series, so when new games in those series do come out, it’s essential that the adverts have the wow factor. The advert for Super Mario Odyssey definitely does, whether it’s panning over the vast landscapes, Mario’s fun little interactions with Cappy or Pauline’s jazzy showtune. I still think Super Mario Galaxy is the ultimate showstopper Mario game, and don’t quite know how it could ever be topped, but the ad for Super Mario Odyssey does a lot to convince me to finally get a Switch.

Since he played the twisted Dr Hill in Until Dawn, I’ve had a bit of a fascination with Peter Stormare. Those uncanny valley facial expressions seemed not to be down to poor modelling work, but more to do with his raw acting ability in conveying a demented, hallucinogenic version of Josh Washington’s psychiatrist. When I unearthed the “Replacer” ads for the Call of Duty series, in which Peter Stormare offers to take over menial tasks such as, oh, I don’t know, taking your wife to hospital when she goes into labour, I thought they were the funniest bit of marketing I’d seen in quite a while.

I want Peter Stormare shrieking at IKEA furniture in every single game now, please. Wouldn’t he be great voicing an oddball teacher in a Persona game? Wouldn’t he be a cool baddie in a new LittleBigPlanet instalment, picking up the mantle from Hugh Laurie? Can he get roped in to play a Slig in Oddworld: Soulstorm? The possibilities are endless.

Do you have a favourite video game advert/trailer? Which adverts do you remember from your childhood, or other significant times in your life? Let me know in the comments down below!