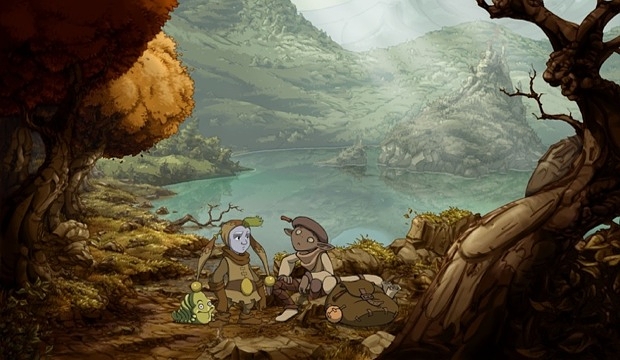 It’s been a long time since we’ve shared some The Whispered World screenshots or information with you guys. Deep Silver and Daedalic recently released three new images — I’ve included seven others that we’ve missed — and tossed out some hot new story information for the hand-drawn adventure title.

The game stars a melancholy clown named Sadwick and his little buddy, Spot. Daedalic describes the adventure they’ll take on as “epic.” Apparently, a king needs something rather important and he sends a messenger to, uh, deliever a message. The messenger bumps into Sadwick and Spot and they’re tangled in the king’s business from there on.

I’m down the game’s art. Judging from these screens, The Whispered World is moody and lovingly crafted. Make sure to check out our gallery and drop me your two cents on the title. (PC only, unfortunately.)

Hamburg/Munich, Germany: April 17th, 2009. Deep Silver and Daedalic are presenting brand-new images and new characters from “The Whispered World”. The fantasy adventure with its breathtaking imagery will be released later this year for PC.

In the autumnal forest, the first station of their epic journey, Sadwick and Spot meet Bobby who is camped out by the shore of the big lake. Looking quite inconspicuous, he turns out to be one of the chosen messengers of the king on a mission of utmost importance. But this presumptuous traveler’s quest will soon go terribly awry…

In the second chapter, Sadwick finds himself on a nocturnal island whose inhabitants all seem to have fallen into a lethargic stupor. Most of all Ruben, who claims to rule the island and jumps in panic at every loud noise. In his chambers, he is guarding an enormous treasure which he amassed through his now closed-down factory.

His henchman Bando is very unhappy about this closure, because he loves nothing more than making loud noises, and is now forced into idleness. He is sitting in his hut, utterly depressed, and biding his time until he is finally allowed to work once more.

The beautiful adventure game “The Whispered World” whisks the player away to a fascinating fantasy world. Sadwick is a young clown but often far from cheerful. One night, a strange blue creature speaks to him in a dream, and sends him on an adventurous journey. Many dangers await Sadwick, for the world he knows is doomed to crumble and fall.

In classic point & click tradition, gamers steer Sadwick and his companion Spot through the game. Little Spot never leaves Sadwick’s side and is integral to solving many puzzles. He can take on many different forms throughout the game, which the player can pick and choose at will, once they have been learned. Hand-painted backgrounds filled with animated details and lovingly crafted characters in the style of classic animated movies like „Spirited Away” bring the story to life. “The Whispered World” mixes fairy-tale elements with melancholic tones to create a tale of epic proportions.

Daedalic Entertainment develops and publishes high-quality computer and video games worldwide, focussing on the production of entertainment software with strong narratives. The company based in Hamburg, Germany offers international partners services in the fields of development, publishing and consulting. With its talented internal team and an expansive network of experienced service providers, Daedalic is the ideal partner for games marketing, development and publishing.

Daedalic has successfuly marketed products like Ankh – Battle of the Gods, Benoît Sokal’s Sinking Island and eXperience112 and has won accolades, incl. two 2008 German Game Developers Awards for Edna & Harvey: The Breakout, its first internally developed title. Currently, the German company is developing the titles A New Beginning and The Whispered World, as well as additional new and innovative games.

Deep Silver develops and distributes interactive games for all platforms. The Deep Silver label means to captivate all gamers who have a passion for thrilling gameplay in exciting game worlds. Deep Silver works with its partners to achieve a maximum of success while maintaining the highest possible quality, always focusing on what the customer desires. Deep Silver products are designed to equally appeal to pros and beginners, children and adults.