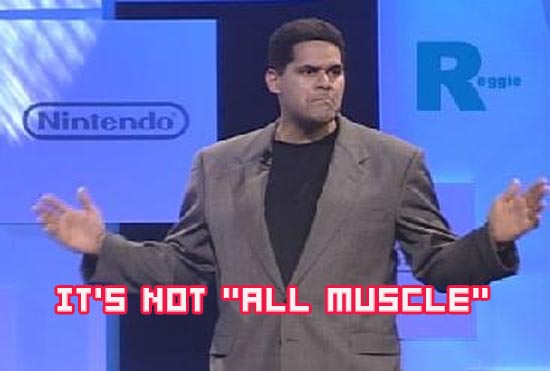 Those of you following our E3 coverage have already heard about Nintendo president Reggie Fils-Aime’s less-than-impressive showing at the Wii Fit demonstration. He tried the route of denial by claiming “heavy clothing,” and when that didn’t work, he hauled out the ol’ “muscle is heavier than fat” chestnut. Sadly, the truth was revealed — Big Reg is overweight.

Wii Fit doesn’t lie, and called out the Regginator’s Body Mass Index at 27.51 — that’s 5.21 points higher than a healthy adult man ought to be. Since BMI is an indicator of overall health, the kind people at WiiHealthy have rightfully become concerned for him, and have started an online petition to help Reggie get back down to a healthy size.

Luckily for Reggie, he already has all the necessary tools at his disposal. Why, with the broad range of fine Nintendo products designed to espouse a healthy lifestyle, he should have no problem beating the bulge with his company’s very own games! Sign WiiHealthy’s petition and leave Reggie supportive messages of encouragement.

After all, “Fils-Aime” translates, from French, to “beloved son,” so let’s take a nurturing role and send Reggie our kindest wishes for a speedy slimdown! Reggie, if you’re reading this, there’s light on the other side — you can do it!

Filed under... #Help is on the way!#Reggie Fils-Aime