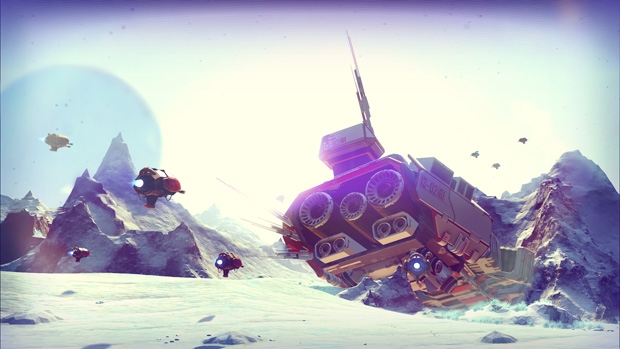 The universe is yours for the taking

Hello Games’ sci-fi exploration survival game No Man’s Sky is looking and sounding as amazing and unbelievable as ever. Here’s an in-depth conversation with founder Sean Murray at E3 2014 explaining what is and isn’t possible within the procedurally-generated title.

“This isn’t an ambient universe,” he said. “This isn’t something you just wander around and look at trees and breathe it in. There is danger everywhere. So the creatures are dangerous, the ecology. But more than that, in space, there are friends — like the wingmen who fly besides you, the enemies who are attacking those freighters — but in terms of gameplay systems, this is a universe and you make your own gameplay within that.”

Those ships shown in the most recent trailer were AI-controlled, but the universe in No Man’s Sky is shared. “You could encounter other players,” Murray explained.

“The reality is the likelihood of that is tiny, basically. What we’re dealing with is planet-sized planets — so even just one planet, if a million of us played, we would still be really far apart.” That said, “…there are elements where you will get crossover and interaction from other players, but that’s not what this game is about … We’re the opposite of an MMO.”

As high as expectations are, I have a feeling Hello Games will deliver, or come remarkably close.