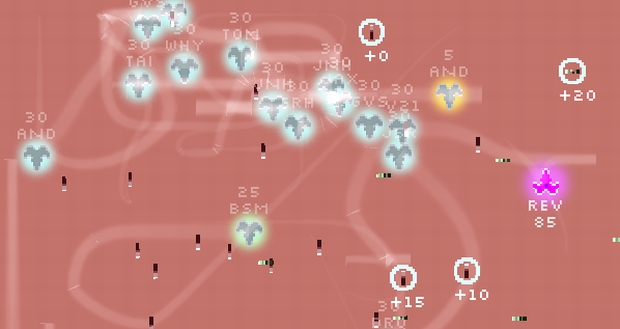 If you’re not familiar with the concept of asynchronously multiplayer games, then there are two games you would do well to try out: Tetris Friends, and George Buckenham’s Hell is Other People.

Where the former merely tasks you with playing against recordings of other people’s games in a sort of isolated way that doesn’t feel very multiplayer-ish until someone dumps a bunch of trash blocks on you, every moment spent playing Hell is Other People is a moment in which you will (A) be directly competing against recordings of other players, and (B) feel your hatred grow toward the members of your own species.

I’ll let the designer explain it himself: “You fight ghosts, which follow the paths of previous players. So you’re fighting a recording, and that recording was fighting against a previous recording, all the way back to when I waggled the ship about in the editor.”

Though you’re not actually fighting against other players in real time, that probably won’t stop you from cursing your bastard opponents every time they move out of the path of one of your agonizingly slow bullets at just the last moment, only to distract you from a horizontally moving shot from some douche you never saw. The game isn’t terribly fun until the screen literally fills with recordings of others, but it’s still interesting in a misanthropic sort of way.

You can play it for free here, or buy one of the wacky downloadable versions here. Depending on how much you pay, you can change the shape of your ship into an animal head.