By now, all of you should be familiar with Hall 7. For Eliza, it is the most delicious smelling sphincter of TGS. For me? TGS’ stenching taint dipped over and over again into my open, paralyzed mouth.

As a summary: Eliza and I have been exiled to Hall 7 through a strange conglomeration of our own arrogance and Nick Chester’s casual homoerotic appeal. While Dale North and that bastard Chester flitter back and forth between Halo 3, Devil May Cry 4, Metal Gear Solid 4 and Dark Love, Eliza and I are wildly gesticulating our inept pidin interview questions at a bunch of mentally-handicapped game design majors fresh-out of Tokyo’s local cut-rate technical schools.

But we’re simply not going to take Chester’s crap lying down. Our resolve? To review every last game in Hall 7. And in the cess pool of laziness and abject incompetence? We will find a sparkling diamond, crapped out by the sphincter of Japan.

Unfortunately, you will not find this rough, fibrous diamond in our first Hall 7 review, the mystically titled Road to Myself.

Naturally, the first thing that strikes the seasoned game journalist about Road To Myself is its title: a Freudian jumble of words that is frankly impossible to parse without invoking the right-handed specter of chronic masturbatory addiction. But surprisingly, the game’s not about jerking off at all. The more the pity. When the Wii finally incorporated wild, flailing hand gestures at crotch-level into the control dichotomy of first-tier gaming franchises, I was absolutely positive that my passions for both jerking it and gaming were about to co-align. Instead? We get games like Chicken Shoot, a game so degrading to play that masturbating over your mother’s grave seems a prospect only half so filthy.

Anyway. Road to Myself is a terrible disappointment, not simply to gaming sophistication, but even to the wild bell curve of Hall 7’s parabola of competence. Instead of the engorged, auto-erotic phallus I half-expected from so Freudian a title? I got the avatar of a paper airplane. Instead of a Wiimote? I swear to God, an old-school Genesis controller, with three lame buttons instead of the usual six.

Luckily, as you can see from the title screen above, you don’t need six buttons… only “A “button. And when I pushed it? What I roughly discovered was a paper airplane simulator trapped well within the  designatory confines of a Nazi-less Wolfenstein 3D maze.

Look, there’s nothing much to say about the mechanics of the game. As you whisk through this two-dimensional first person maze — itself entirely compresedof 90 degree corners incorporating a flat angled maze — you inevitably close upon a wall in front of you. Quickly pressing right on the Genesis’ D-Pad moves you right. It’s as simple as that. There are no obstacles. There is no subtlety or skill. It is a choose your own adventure game, in the trappings of a Starfox-like first-person racer. You simply make 90 degree turn after 90 degree turn until you finish all of the <em>laops</em>.

But I’m not going to lie to you, oh, my deetoid droogies. These reasons were not why we ultimately loved Road to Myself. It was in its Engrish that we found our adoration. Perhaps this screenshot will sum it up best: 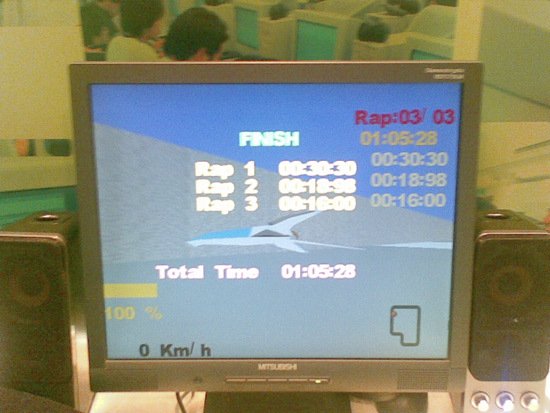 As you can see, there is a palpable sense of accomplishment in Road to Myself. Though I have not yet managed to beat myself off to orgasm while playing it, I have somehow managed to lay down three phat raps, three mad rhymes. All in less than a minute and a half! And as I pull my pants down to my knee buckles and begin singing the lyrics to NWAs “Real Niggaz Don’t Die?” It never once occured to me that the Japanese would actually mistake “rap” for “lap.” It’s the sort of grammatical mistake inherent only in the World War II era racist cartoon.

But that’s the Hell of Hall 7 for you. Watch for our next exciting preview tomorrow: Watermelon Studio’s budget RTS title, Brack Sordiels.

—
Florian Eckhardt runs Ectomplasmosis, a fringe art and culture blog, with his co-editor, Eliza Gauger. Two days into TGS? Ms. Gauger has already sunk into a routine of refusing to talk to him between the hours of 7pm and 11:30pm, after which time she suddenly becomes jovial again. Unsure about what to do about her cyclical contempt, Florian is willing to consider all trades, no I.O.U.S. Caveat emptor: she stains everything.