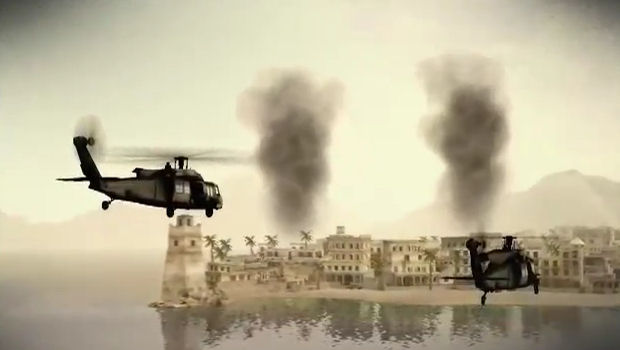 Did you want more “hardcore” Kinect games? Prepare to regret that request, my friends. Just check out that trailer (actually using the Wii version, oddly) and be stunned.

This is Heavy Fire Afghanistan, a game that may very well be glorious in its tastelessness. The point of this on-rails shooter appears to be to shoot brown people … streams and streams of brown people. It’s basically House of the Dead with contemporary terrorists, set in a war-torn part of the world.

“Enemy Contact. Open fire! Defend the base. Lock down the streets of the local town,” says developer Mastiff. “Hunt down the enemy in the forests. Rescue the hostages from the caves. Sweep the enemies out of the mountains. Fly in helicopters. Ride in tanks and trucks. Take it to the ground and get up close and personal with the enemy. Your objective is simple: Grab the biggest gun you can find, then knock out the enemy with your Heavy Fire!”

Yes … it’s as jawdropping as it sounds. The best part is it’s only $18.99 on Amazon. Pre-order yours today!

As well as Kinect, it’s hitting PS3 and Wii. It has co-op, so you can shoot Johnny Foreigner with a friend, destructible environments, because f*ck Afghani homes, and vehicular sections. It’s due out this year, and let me just say hello to the FOX News/Daily Mail researcher who is most likely reading this now and stroking their crotch in anticipation.